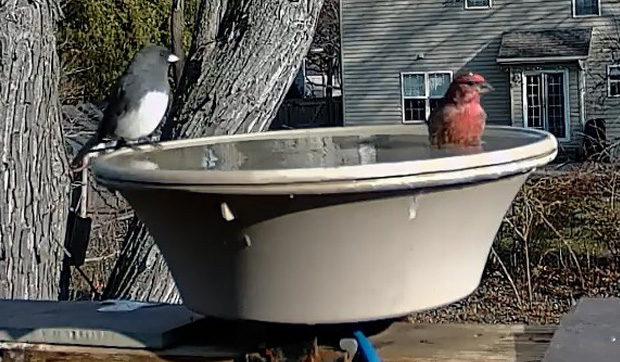 How do you host a wild bird bash in the middle of winter? Just add water…to a heated birdbath.

This week’s story has been years in the making. But I’m hoping its effects will be felt for years to come.

Going back to the late 1990s-basically as long as I’d worked in the field of nature education–I’d touted the benefits of winter water sources for wildlife. Yet while we had a great assortment of water features in our St. Charles parks, I personally had none.

But that changed-make that started to change-in December 2016. That’s when I purchased for myself, as well as all the neighborhood birds, squirrels and other thirsty critters, the ultimate gift for wintertime nature lovers: a heated birdbath. Merry Christmas to us!

The only problem was, the best part of the gift-the heat-required electricity. And my vintage 1970s house, groovy as it is, had no outdoor receptacles.

Undeterred, I mounted the unit on my deck railing. As I attached the bolts and nuts I made a vow to install an outlet in spring, and resolved that in the meantime I’d get up early every morning, heat a kettle of water, de-ice the birdbath, refill and repeat daily until warm weather returned.

It was a great plan all right. For about a day.  After that, the birdbath sat there on the deck rail, frozen over and, I swear, taunting me, until the spring thaw.

From then until November though it was birdbath business as usual. Each day I’d use an old toothbrush to cleanse the interior of the bath before rinsing and refilling with cool, refreshing and life-giving water.

But the outdoor outlet? Didn’t happen.

Winter of 2017-’18 came and went with its attendant icing-over and taunting, and spring-summer-fall brought more daily rinses and refills. November rolled around again and, at long last, the day came when I decided Jack Frost would not ruin another season of bird bathing. Armed with a Menards gift card and a rudimentary knowledge of household wiring, I tackled the power problem head-on. I bought an outdoor light fixture with two-count ’em, two!-GFCI outlets. Happy Black Friday to us!

Since that grand day, now more than three years ago, I have enjoyed countless hours of watching the neighborhood wildlife come in dry and/or dirty and leave quenched and clean.

It did take a few weeks for the birds to get used to this new, 24-hour oasis. I remember that first winter I arranged some branches on the edge of the deck, to provide a bit of cover for the bathing beauties and help them feel less vulnerable to predators. When summer came I replaced the branches with flowers in pots. Then one day the delicate blooms were wilted and the water bore a thin layer of ice.

Even simple pleasures like heated birdbaths come with a learning curve.

These days though I’ve got a routine down pat. When the forecast starts calling for temperatures below freezing, I bring out the extension cord, lace it through the cable staples and plug it in. It’s such a thrill to see the birds sail in and take their drinks amid the vapors rising from the gently heated bath.

You wouldn’t think birdwatching could get any better, but then Black Friday rolled around again this year and my little watering station leapt into the 21st Century: I added a motion-activated trail camera. Happy Holidays to us!

I tell you, this little gadget has added all sorts of insights into the action in Potto’s Pool. I can now see, in 10-second video snippets:

(Bet you thought I was going to say owls, right? Maybe some day, but until then I’m happy with these little guys. They play an unsung role in our early winter ecology, pollinating witch hazel while also serving as food for hungry birds. I’m happy the bath is there to slake their tiny thirsts.)

If you’re looking for an easy way to have a positive impact on your wild neighbors, you might want to check into adding a heated birdbath of your own. And if you really want to jazz things up, add a trail cam. I guarantee they’ll add splash, and flash, to your New Year and beyond.