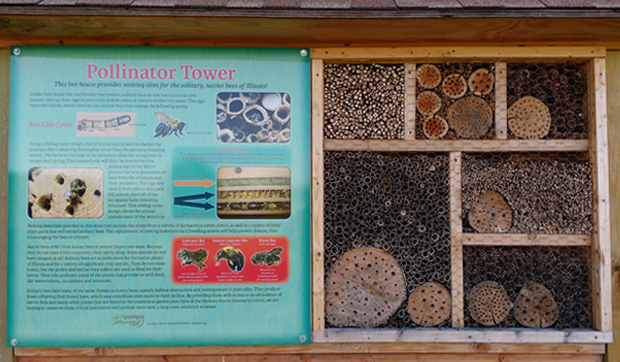 The St. Charles Park District, in its efforts to support native pollinators, erected this bee house early this summer. It is located behind the Hickory Knolls Discovery Center. The structure was immediately adopted by a number of native bees. You can make a smaller version of this house by stuffing native plant stems into a large tin can.

There’s no doubt, fall is upon us. The air has a crisp coolness to it, especially in early morning; the leaves are changing colors; birds are migrating through on their way to their winter destinations.

I know nearly everyone in this area likes a nice, tidy lawn. No weeds cropping up, no shaggy mowing, all leaves raked to the curb. But what I’d like to do today is to have you consider downgrading your tidiness a notch or two.

Those leaves on the ground, along with native flora like cup plants, milkweeds, coneflowers and black-eyed susans still have a job to do, even though their blooming days have long since passed. Each of them, and many others, serve as important overwintering habitat for our native pollinators-butterflies, moths, bees and wasps.

These creatures are vitally important to our existing plants, whether they are in formal gardens or casual plantings of perennials. Without pollination, these plants can’t produce the seeds and fruit they need to secure the next generation. And pollination can’t occur without pollinators.

The Big Three, as I call them-the monarch butterflies, honey bees and bumblebees-are only the tip of the iceberg when it comes to pollinators.

Here in Illinois we have over 500 species of native bees. And few look like what we consider to be the typical bee profile-black and yellow or orange stripes, fuzzy, and of course those stingers used for self defense. Native bees can be metallic green, dark colored or similar to that typical bee profile; some don’t even have stingers.

Native bees share another characteristic that is very different from our native bumblebees and nonnative honey bees. They are solitary, semisocial or eusocial as described below. You won’t find a hive of thousands of individuals or, in the case of bumbles, a smaller underground nest. Instead, native bees fall into one of the following categories. In many cases, the bees seek bare ground–something that is rare in many areas.

The information that follows is courtesy of the Illinois Department of Natural Resources:

Regardless of species, one feature that all can enjoy is a mud puddle. You can let rainwater settle in a low spot for natural mud, or you can create a mud puddle by filling a large potted plant saucer with sand and soil, and then adding water.

To save any of these insects from a fate worse than a lawn mower or leaf blower, it’s critical to save some portion of our landscapes. They, the bugs, will overwinter in one of four stages, either as an egg, a larva, a pupa (read cocoon or chrysalis) or as in an adult, in a phase called diapause-the insect version of hibernation. Which stage they opt for depends on species.

Native bees tend toward the pupa option, so if their chosen overwintering site gets chopped down, it’s adios to that next generation. Mourning cloak butterflies, a personal favorite, overwinter as adults and, so long as their diapause is uninterrupted, they are usually the first butterflies to appear in this area. Their timing often aligns with the time the sap is running in maple trees , late February to early March,  which is months ahead of most other butterfly species. Meanwhile, most moths are tucked inside cocoons, waiting for a warm spring day to emerge.

We should all be so lucky!