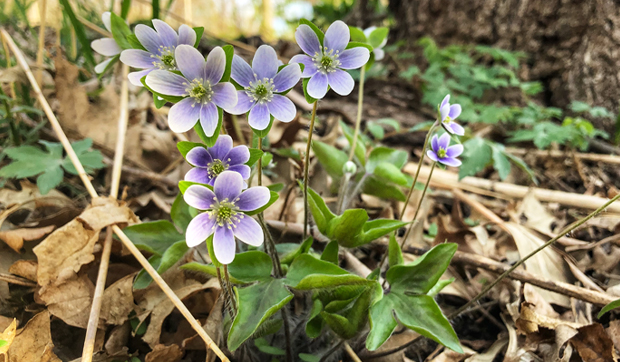 Named after its leaves, which resemble the liver, hepatica can be found in rich deciduous woodlands throughout our area.

Okay, I’m just going to come right out and say it. I like liver.

Beef liver, chicken liver, liverwurst…it doesn’t really matter what form it takes. I’ll willingly dive into a plate of liver and onions or a braunschweiger sandwich-and probably ask for more. In fact in my former life as a food editor, I once helped write some lyrics for a parody of the song Cry Me a River. (“Well you can fry me a liver, fry me a liver, and I’ll fry a liver just for you…)

So it’s only logical that when it comes to woodland wildflowers, one of my perennial favorites is liverleaf-a species more commonly known as hepatica. It’s the perfect bloom for liver lovers and flower fanciers alike.

Purplish-brown during much of the year, and tri-lobed in shape, the leaves of this early-spring ephemeral do indeed evoke impressions of one of the body’s most essential organs. In fact, back in the day, it was even used to treat a variety of liver ailments.

(I don’t want to digress too far from this ode to liver and liver-shaped things but, my goodness, this practice of using plants that resemble body parts as remedies, actually a concept called the doctrine of signatures, is a fascinating topic in itself. It dates back to ancient Greece and states that certain plants were signed by God to indicate how they should be used. Bad tooth? Try Dentaria, or toothwort, the plant with the jagged, tooth-like leaves. Spleen woes? Dig into some Asplenium, or spleenwort, a fern with spleen-shaped clusters on the back of its fronds. The list goes on but if I’m going to remember any more of it I’m going to have to eat some walnuts, because their wrinkly lobes look like brains…)

Let’s see, where were we? Ah yes, liver-shaped hepatica leaves. Even though its flowers are classified as spring ephemerals, you can find the plant’s leaves throughout the year. It’s a great adaptation that allows hepatica to take advantage of sunny winter days, enabling photosynthesis and letting the plant produce and utilize nutrients when other plants are still sound asleep.

The leaves are essential for sure but-forgive me-they look like chopped liver next to hepatica’s cheery blooms. They consist of six or so petal-like sepals and range in color from white to pink to mauve and purple. In the words of Dick Young, our area’s most famous naturalist, the plant is “An exquisite perennial, heralded as the first of the spring wildflowers to bloom in early March when the furry stems and buds arise from last year’s lingering mat of 3-lobed leaves.”

Another takeaway from Mr. Young’s book is just how conservative, or particular about its growing conditions, hepatica is.

In his and other plant references, you’ll find a number next to the species name. This figure is the plant’s Coefficient of Conservatism, or C-value. Plants that tolerate a wide range of soil types  and levels of disturbance have a low C-value. Ranked a 1, the common blue violet, Viola sororia, would be a good example of an easygoing native wildflower that brings its benefits to a wide range of habitats.

Plants that are introduced and/or invasive rank a 0 or less. Garlic mustard and European buckthorn, for instance, are two of our areas most pernicious invaders and both rank a -3.

Then we have those plants at are found in specific types of ecological communities. Hepatica is one (and in certain references, two) of these species.

Some field guides treat our two local forms of hepatica as subspecies. Sharp-lobed hepatica is listed as H. nobilis acuta and round-lobed hepatica is H. nobilis obtusa.  In Mr. Young’s book though you’ll find them split into H. acutiloba (for sharp-lobed) and H. americana (for round). He lists the former’s C-value as a 6 and the latter as a 10.

This conservative growth habit, to me anyway, what makes finding hepatica so much fun. It’s just fussy enough that you have to first find the proper habitat type-namely rich deciduous woodlands-and then peer carefully among the leaf litter to find those liver-shaped leaves, fuzzy stems and pastel flowers.

Because it blooms so early, hepatica can’t rely on a cavalcade of pollinators. On warm days it might be visited by go-getter butterflies, bees, beetles and flies, but as a hedge against cold weather (and haven’t we had a lot of that lately?!) the plant can also self pollinate. It spreads by seeds so, usually, when you see one hepatica you’ll see several.

If you enjoy the challenge of finding flowers that are just a little out of the ordinary, add hepatica to your list of Things to See This Spring. You’ll find plenty of fine qualities to appreciate…even if you’re not a liver lover.