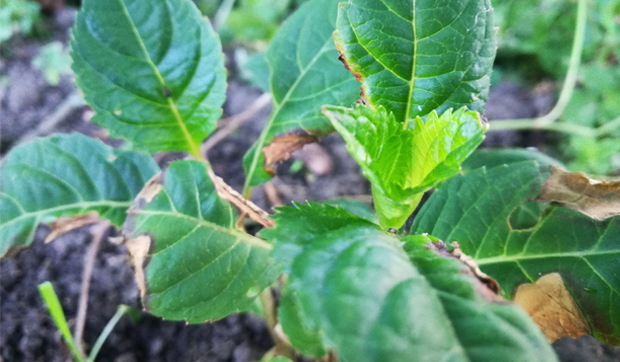 New growth sprouts for Herb the hydrangea, who’d lingered too long in the shadow of a black walnut tree.

Don’t you just love a good Aha! Moment? You know what I’m talking about…that instant where a lightbulb comes on, the brain fog clears and Aha! A problem is solved.

I think I savor these times even more because of the way my head is wired-with a dimmer switch rather than one that flips. More often than not, when I get an idea it’s a slow glow that gradually brightens. An abrupt Aha! provides a welcome change.

And so it was that, on Father’s Day weekend, no less, I was bless with an Aha! Inspiration struck, a persistent problem was solved, and a life near and dear to me was saved.

This particular challenge actually dates back to 2017, the year I was given a hydrangea bush by my good friends known collectively as the Hens. (Long story, but the name goes back to when we all worked together as editors at a publishing company. The staff was largely female and when we’d sit together at lunchtime our two male coworkers would sometimes opt out of our “hen party” in favor of, maybe, a bull session.)

At any rate, 2017 had been a pretty rough year for me. I was grappling with colon cancer, and my dad had died. Bless their hearts, the Hens planned a birthday outing for me. They took me to lunch and brought me this cute little hydrangea I promptly named Herb-after dear old Dad.

As time went on, the cancer went into remission and the pain of losing my Pop gave way to great memories. But Herb the hydrangea? Well, he floundered. He produced one baseball-sized blossom in 2018-which I proudly photographed and sent to the Hens–but throughout 2019 he just kind of existed, leafing out but not flowering.

When spring of 2020 rolled around, I gingerly poked among Herb’s dried stems, looking for some sign of life. He’d looked so anemic last fall, I didn’t have much confidence he’d survive. But during one of the few dry days we had in May he perked up a bit, and sent out a couple of leaves. Hopeful, I stuck a large stick in the ground so I wouldn’t inadvertently step on little Herb or, worse, hit him with the lawn mower.

But as May morphed into June, his condition went from stable to critical. His leaves remained small and wrinkled, and developed brown spots. Even my special plant fix of water with a little milk mixed in didn’t help. I was beginning to think Herb the hydrangea would soon earn his wings, and head to that big compost pile in the sky. Or at least the little one in the backyard. What would I tell the Hens??

Thankfully, an Aha! Moment came to the rescue.

It was the Saturday of Father’s Day weekend, and I was standing not too far from Herb talking with my dear neighbors the Tillmans. At some point I mentioned I had hydrangea envy, having admired their lush shrubs for years, and Mike responded with something like, “Well the ones in back are doing fine. But the ones in front are gone.”

It took a minute for his words to sink in. But sure enough, the hydrangeas that had graced the space between our yards were no more. I hadn’t really given it much thought when they’d planted some New Guinea impatiens in that space; I thought maybe it was just time for a change. But learning that their hydrangeas had withered too… Hmm…

Several years ago, probably at least 10, a squirrel-sown black walnut tree and sprouted amid those shrubs. It’s grown to an impressive height, and its roots no doubt now reach over into my yard, right where Herb was clinging to life.

I’ve always heard that walnut trees produce chemicals with allelopathic properties, but I’d never actually had any direct experience with it. Or so I thought. But there it was. Allelopathy was killing my Herb.

Allelopathy is the fancy name given to the process by which one plant produces chemicals that inhibit the growth of other plants. It’s a pretty neat adaptation that allows a plant to reduce the competition for water and nutrients. And among allelopathic plants, the black walnut is king. While not every plant is sensitive to the chemicals it produces, those that are-like hydrangeas–don’t stand a chance.

It might have been too late to save the Tillmans’ shrubs, but Herb was still hanging in there. Would relocating him help? I was willing to try.

Later that same day I grabbed a shovel and dug Herb out of the ground. I winced as I noted his pitiful roots didn’t even fill the scoop part of the blade. I set him down in his new home, on the south side of the front yard, then made a trip to the back for an extra-special treat: a big dip of nutrient rich compost. I tamped the soil down and gave him a long drink of water from the hose, then crossed my fingers and hoped for the best.

I didn’t have to wait long. Within 48 hours, Herb had begun to rally. His stems were straighter, his colors brighter. After the days, new growth began to sprout and at five days the new leaves were already over an inch long.

At this point I’m pretty sure Herb will not only survive, but thrive in his new location. I’m pretty excited about his recovery. He’s a living tribute to my dad, who could grow a great many things, as well as a reminder of good friends, and the power of perseverance. I kinda feel like I should let someone know this noteworthy tale.