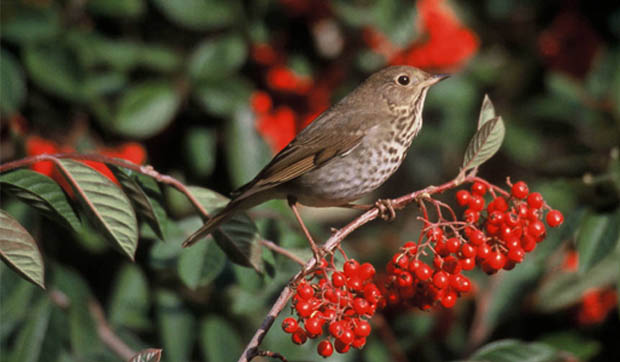 During fall migration, look for hermit thrushes in bushes with berries. The bird’s coloration helps it blend in with the season’s brown leaves, but a distinctive wing and tail twitter often give it away. (Credit: Lee Karney, USFWS)

Not long ago Hickory Knolls had the good fortune to host several hundred seventh graders from Thompson Middle School in St. Charles. Their objective was team-building, which they accomplished through a series of outdoor activities situated in the athletic fields of James O. Breen Park and throughout the Hickory Knolls Natural Area.

The cool air and warm sunshine made the conditions as close to perfect as we could ask for. Even better, the woods were positively alive with birds and their fall busy-ness. As I waited for the kids to arrive I took note of all the activity at my station out in the oaken wilderness.

(Side note: For as long as I can remember, I’ve counted species. Of what, you ask? Pretty much everything. Insects singing on a warm summer night. Trees as I’m out walking the dogs. Roadkill as I’m driving. And birds. Always, always birds. I try to get to 10, but will settle for whatever time and conditions allow.)

As per habit, I looked and I listened to see just who all was flitting among the trees and shrubs that surrounded me. Robins-at least a dozen-had descended into the honeysuckle and were gorging themselves on the pernicious invasive’s berries. Meanwhile, a female downy woodpecker tapped her way along the underside of a dead branch in a search for crunchy insect morsels. A white-throated sparrow tried its hand at singing its signature “Poor Sam Peabody Peabody Peabody” song, but after a few attempts consisting of about five syllables each, gave up and flew from sight.

A chunky fox sparrow rustled among the fallen leaves; a few cedar waxwings came in but didn’t stay; and blue jays jeered their “Jay! Jay!” calls in the distance. A pair of cardinals and a chickadee brought my count up to eight, which suited me fine as eight is my favorite number.

But then I saw it: A curious little flutter deep in the tangled honeysuckle. I shifted a bit and squinted and waited for the motion to happen again. I had a hunch of who it was, but my birding skills being what they are-that is, on a good day, fair to middling-I wanted to observe a bit more before I chalked up No. 9.

I slowly lowered myself onto a nearby stump but kept my eyes trained on the fluttery object, which moved every few seconds but stayed within the same cluster of honeysuckle. It was gleaning berries, for sure, but followed each beak-full with a brief pause and a very distinctive movement. One I’d seen before, but it had been a very long time…

The bird moved again, this time to a branch where no leaves blocked my view. I got a split-second view of its spotted breast and its brownish back, and could gauge its size as being about that of the fox sparrow, but with a thinner bill and build.

Then there was the tail. It had a reddish cast, which was somewhat helpful in the ID process, but even more so was its movement. It flicked. Frequently. Each flick, which I guess could be described as an up-then-down pump-like motion, was accompanied by a twitch, or tic, of the wings.

These sprightly birds migrate through our area in spring and fall as they travel to and from their breeding grounds, which extend from northern Wisconsin far into Canada. I think part of the reason I like them so much is that their coloration and habits are cryptic enough that they’re not really considered a beginner’s bird. Yet when you know to look for that combination of spotted breast, reddish tail and twittering wings and tail, you can pretty much nail the identification every time.

For so-so birders like me, that’s a big deal.

If you’re lucky enough to see a hermit thrush, you may get a vague impression of a bird that’s much more common, the American robin. Which makes sense, as both are members of the family Turdidae, the thrushes. If you can picture a newly fledged robin, complete with spots on its chest, you’ll know what I mean. That speckled breast, which goes away when the bird molts into its adult plumage, is a giveaway of the robins’ thrush heritage. (Likewise for young bluebirds, who also are members of this widespread family.)

As I watched “my” hermit thrush twitter and twinkle its way through the underbrush, I was suddenly reminded of the circumstance that brought me to the woods in the first place. Excited voices-and lots of them-were headed my way.

The thrush flew one way and I another as I dashed over to welcome the first round of students. As they burst into the clearing I happened to see three crows flying and cawing overhead. Aha!A  tenth species! A perfect 10, for a perfect day. A day even a hermit would love.