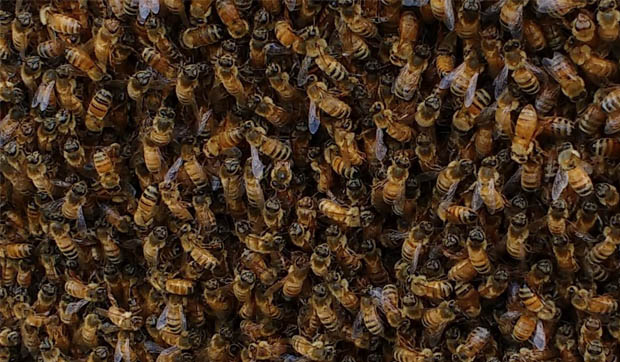 Photo Caption: All for one and one for all! Fueled by their namesake food, honey bees work communally to maintain the internal temperature of their winter cluster at or near 96oF.

Boy, talk about a honey of a deal.

At a time when most insects are whiling away the hours in some sort of inactive state, as an egg, larva, pupa or adult, as well as a time when many bugs have checked out completely, our local honey bees are alive and well, and living in climate-controlled comfort.

OK, maybe the term “comfort” is pushing things a little. These social insects are working their [honey] buns off. But it’s all for a good cause: They’re keeping their queen – the reproductive bee that ensures the colony’s future – at summer-like temperatures as warm as 95 F.

That’s right, even when the thermometer dips below freezing honeybees in the center of a hive are warm and toasty. When the mercury drops below zero, as it’s done on and off these past few weeks, that center area will still be be balmy, bordering on hot. Probably a little sticky, too.

How do they do it? Sure, honeybees’ bodies are fuzzy, but they lack the luxurious fur coats our mammals grow. They don’t put on extra layers of fat, nor do they grow downy feathers.

The secret to this amazing feat lies in the bees’ ability to generate heat … by shivering.

Like it or not, shivering is a great way to warm up. As humans, we tend to reach for another sweater or blanket the first instant we feel a chill. But animals don’t have that option.

So how do the bees fuel this internal fire? With honey, of course. A decent-sized colony of bees with, let’s say, a few tens of thousands of individuals, can produce around 200 pounds of honey over spring, summer and fall. Just as we store up firewood to be burned for warmth, the honeybees store up honey to be eaten, then turned into heat.

Even though 200 pounds is a lot of honey (shoot, it took me almost six months to go through a 2 lb. jar) the bees nonetheless tap into it prudently. Instead of immediately turning on the shiver, a response that requires lots of fuel to maintain, they first will form a tight cluster, effectively sealing in the queen and insulating her from the cold.

Bees on the outer edges of the cluster, known as mantle bees, will feel the cold and start shivering first. But when the outside temperatures really drop, even bees deep inside the cluster will shiver to keep the cold at bay.

Having the right home doesn’t hurt either. Our wild honeybees are cavity dwellers. (Note I didn’t say native honeybees – although they’ve lived here for a couple hundred years, honeybees are still considered nonnative, having arrived in North America aboard the first ships packed with European settlers.)

Ideally, like the bees in Winnie the Pooh’s honey tree in Hundred Acre Woods, they’ll hole up in a hollow tree, where layers of wood and bark provide protection from the elements. But sometimes they’ll opt for more unconventional locales, like the space between the walls in a house. Or, once, the gap behind the sign on the Target store in Batavia.

Over the years we’ve found several bee trees in the Hickory Knolls Natural Area. We’ll be keeping an eye on them this winter, and I hope you will too. Tune in next week to learn how!