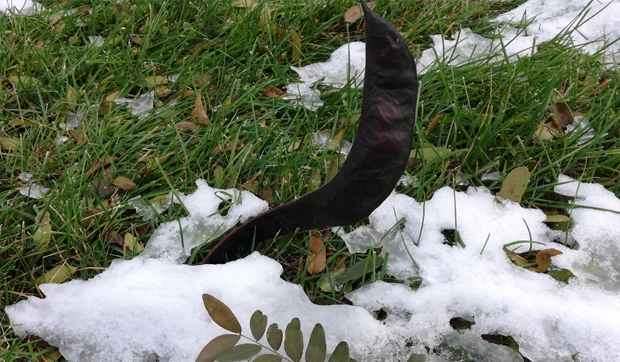 Photo Caption: Long, thin ‘beans,’ or seedpods, that rattle like maracas are a sure sign that honey locusts are nearby. Some varieties though are fruitless, so also be sure to look for the tree’s compound leaves and plated, gray bark.

Last week as I strolled with my dogs Joey and Kit around our neighborhood in St. Charles, we came upon a honey locust tree and decided to give it a look.

Now, hear me out on this. Given that honey locusts are one of the most popular tree species, planted by homeowners and municipalities alike, it might at first seem like my little announcement is the ecological equivalent of stating, “We came upon some air, and decided to breathe it.” Because yes, in some areas honey locusts are just that common.

But being common doesn’t preclude something from being wondrous. And the more I explored this intriguing species, to the dogs’ chagrin, the more enthralled I became.

I have to admit, the first few minutes of my study were spent overcoming a personal bias. My dad was not a fan of honey locusts. He’d been stuck by their thorns, he found the plentiful seed pods of female trees messy, and he thought their tiny leaflets were nothing but gutter clogging and impossible to rake.

But as we stood under this tree, I began to think that maybe my old man just didn’t give this species a chance. Its gray bark, arranged in long plates curled along the edges, offered intriguing crevices just the right size for sheltering small creatures. Its compound leaves, though waning and likely to soon be causing drain obstructions of their own, reminded me of little palm trees.

And then there were the pods. Hundreds, maybe thousands, of pods peeking up through the Halloween snow beneath some, but not all, of the trees.

Looking again at the bark, I noticed that much of the surface was blanketed with lichens. They were mostly the low-growing, gray-green crustose kinds, dotted here and there with large, circular foliose specimens. Lichens themselves are neat little organisms consisting of an alga and a fungus (sometime two) that enjoy a mutually beneficial existence known as symbiosis.

Then, as I looked closer, I noticed the lichens weren’t the only ones living the high life there on the bark. One crevice housed a cocoon, which in turn contained some future moth biding its time in diapause. A shield bug peeked out from another cleft, soaking up a little sun while also using the bark as a literal shield from the stiff breeze.

On another tree a small fly of some sort also was basking, albeit carefully. That tree, seemingly more than the others, had many small spider webs, the work of many small spiders that no doubt have a taste for said small flies-and moths. I saw a tiny one trapped in a web and couldn’t help but ask, in a quiet voice so as to not disturb the power walkers around me, Hey little Spidey, do you want flies with that?

I also noted that none of the trees planted along the street and schoolyard had thorns. Wild honey locusts have some of the most splendid, spiky thorns known. They’re useful for birds who nest up in the branches, for they prevent predators from climbing the trunk. But in suburbia they’re just a liability and hence have been bred out of most cultivated varieties.

As I contemplated this lack of thornage the dogs, who’d sniffed and pawed all they cared to at that particular point, began to get impatient. They were also eliciting a lot of barks (the canine kind) from the other neighborhood hounds, all of whom seemed suspicious of our dawdling.

But there were still those magnificent pods to investigate! Luckily I’d put on the coat with lots of plastic bags in the pockets, so I quickly gathered a few handfuls of seedpods and scurried back home.

Back in familiar territory, the dogs settled in for naps and I seated myself at the computer to learn more about honey locusts.

Right off the bat I was happy to learn that these trees belong to the same family (or subfamily, depending on taxonomist), Caesalpiniaceae, one of my other pod-producing favorites, Kentucky coffee tree. The group consists of mostly tropical species which, at least to my way of thinking, justifies the palm tree qualities of the leaflets.

I was also interested to learn that, like Kentucky coffee trees, Ice Age honey locusts relied on megafauna like mastodons to distribute their seeds. These days that job is mostly accomplished by humans although, according to researchers in the southern Appalachians, our current use of locusts in landscaping is nothing new. Dispersal patterns in that region appear heavily tied to settlements of Cherokee, who revered the tree for many cultural and practical uses.

The seedpods, for example, are lined with a starchy, sweet pulp and can be ground into a powder and used as a sweetener. The Cherokee knew this, thanks to their rich tradition of handing lore from generation to generation. And now I know it too, thanks to YouTube.

I’m not really one to watch many videos online, but a link promising to show me how to turn honey locust pods into a flavorful, carob-like food ingredient was too good to pass up. Briefly, you boil the dried pods, remove the seeds, dehydrate what’s left and pulverize it in a coffee grinder. I may try this some day but, having followed the video person’s advice that the pods make a sweet snack on their own, and having my tongue go numb, I’m going to defer until I can gather more information.

What I do know for sure is that the pods make a delightful rattling sound, kind of like maracas. And tied together on a long string, they make a dandy cat toy. The dogs are still asleep, but Jimmy Cat is raring to go. And just maybe, somewhere, my dearly departed dad is reexamining his attitude toward the heavenly honey locust.