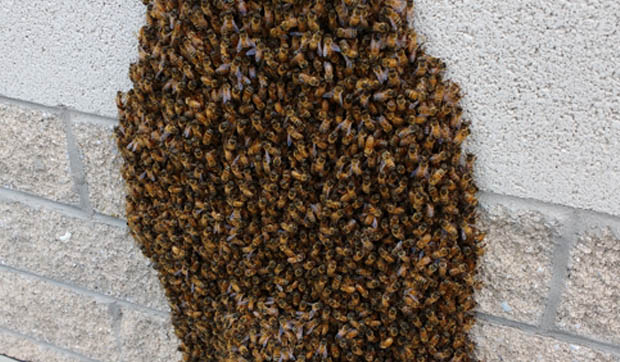 Honeybee swarms are colonies on the move. Swarming is the means by which honeybees propagate.

If you’ve ever moved to a new home, you know the tremendous amount of planning, preparation and coordination that must take place. A new home needs to be chosen, the old home needs to be sold, possessions packed, a moving vehicle of some sort needs to be procured… It’s a lot of work, no doubt about it

Healthy honeybee hives produce thousands of worker bees, sometimes tens of thousands and, over time, the ol’ home hive can get pretty crowded. Not equipped with buzz saws, or even chewing mouthparts, the bees need to move, plain and simple. In fact, it’s the way honeybees propagate.

Unlike humans, who don’t typically live their everyday lives ruled by a queen, honeybees live only to honor theirs. The queen is the center of life for a colony and to leave without one would mean eventual death for entire group. This being the case, a colony will take the time to produce a new queen before leaving their old digs. The existing queen will lay eggs in worker-created queen cups, and the workers will feed those larvae a protein-rich substance known as royal jelly. If everything goes right, a new queen will emerge in about 17 days, ready to mate with some drones and go on to live a productive life of one to five years.

Prior to leaving, the workers will do one other thing for their queen that at first seems counterproductive: They stop feeding her. But alas, such starvation dieting is for the good of the queen, and her colony. A fertile queen full of eggs is much too heavy to fly. A hungry queen stops egg production; she then soon reaches her flying weight and is able to join the rest of the colony during the move.

Humans might not have a live-in queen, but we do share some characteristics with honeybees. Like us, they go house hunting. Not the entire colony though-that would be the equivalent of the entire town of Geneva going structure to structure, tree to tree, looking for a suitable cavity.

Instead, the colony sends out scout bees. Scout bees don’t wear uniforms with patches, but they do their best to be prepared. They head out and scour, or scout, the area surrounding their hive looking for a proper home.

The troop of scout bees is made up of the most experienced foragers in the colony, usually around 1% of the hive. They disperse in various directions, looking for tree cavities, or even small, dark openings in the sides of structures-including houses. If the scouts find a spot they think appropriate, they’ll come back to the colony and communicate their find through an intriguing set of maneuvers known as a bee “dance.” Other workers will read these signals and follow the scouts back to the new site and evaluate it themselves. If they too find it fitting, they’ll head back to the rest of the clan and the colony will swarm to the new home.

Another important step in swarming is for the worker bees to remember to pack. No, not boxes, trunks or suitcases, but nectar and honey stored inside their bodies. These provisions are essential, for the workers have a lot to do once they arrive at their new home. The site needs to be sealed with propolis-a waxy substance that serves as honeybee caulk-and six-sided wax cells need to be formed so the queen can resume her egg-laying duties.

Assuming all goes well, the queen cells left behind produce a queen that will successfully mate and, voila, one honeybee colony becomes two.

I’ve been thinking a lot about swarming lately, as the observation hive at Hickory Knolls appears to have done so last week. We’ve still got bees, and hopefully will have a new queen soon. In the meantime, the “old” colony has hit the road, so to speak, headed for a new home they, harrumph, prefer over the one we provided them for more than two years.

Colonies on the move try to stay relatively close to their original home, so hopefully our Hickory Knolls honeybees stayed nearby, maybe in a nice tree cavity they found nearby. After all, we have just about everything a honeybee could ask for-acres of wildflowers with accessible nectar, a spring-fed water source, and welcoming environment for pollinators of all types.