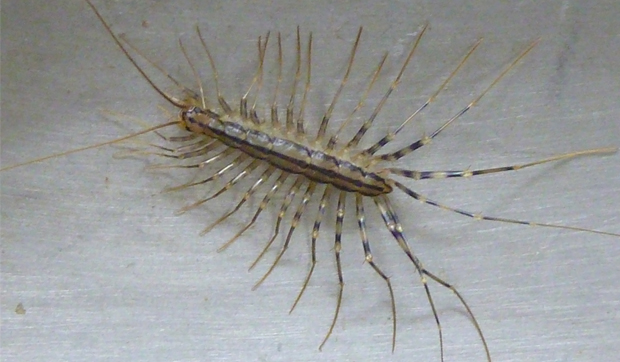 Photo Caption: House centipedes are able to move their longer rear legs over their shorter forelegs as they move forward, a talent that prevents tripping and creates an illusion of great speed.

It was an “Eek!” heard round the world. Or at least in every corner of our humble campus apartment. My college roommate Alisan, one of three people with whom I shared the tiny unit, had uncorked the shriek, the likes of which I hadn’t heard since my box turtle Arthur crawled over her bare foot during finals week of fall semester 1982.

This, however, was spring of 1984. The four of us were living in a swanky shag-carpeted two bedroom that overlooked a small creek (“the Boneyard,” for any of you University of Illinois grads). Dark and somewhat damp, the apartment was home to all manner of crawly things, especially cockroaches.

We all knew Al’s cockroach squeal, which really was more of a muffled “Aak!” than a full-blown “Eek!” But this startling outburst was way more chilling. It was the sort of scream reserved for life’s truly menacing pests: the mouse, the spider…and the house centipede, Scutigera coleoptrata.

You know the sort of many-legged creature I’m talking about. Yellowish tan, usually with vague longitudinal stripes, these are the critters people tend to describe as having “a million legs” and moving “a mile a minute.” They frequently appear in sinks and tubs, but also can be found traipsing across walls, ceilings, baseboards and – in Al’s case, rather disconcertingly – a pile of freshly laundered delicates.

I’m reminded of Al’s centipede scream every time I see a house centipede, which is fairly often. These successful myriapods, native to (most likely) the Mediterranean region, have been introduced across the United States and southern Canada. Though they are sensitive to cold temperatures, they’ve found a perfect habitat inside our climate-controlled homes, where they enjoy year-round comfort as well as an abundance of food.

This is where I’ll probably lose some of you, because what I’m about to do now is stick up for these wiggly squigglers. True, they’re neither cute nor cuddly, and the way they move is, well, downright creepy. But house centipedes are, like fly swatters and ant traps, handy to have around.

So long as they can avoid ending up on the business end of a shoe, a tissue or – my friend Barb’s preferred means, a stream of hairspray – house centipedes will work diligently to reduce your home’s populations of a wide array of even less savory characters. Fierce predators, house centipedes use modified forelegs to inject venom and take down a variety of prey, including cockroach nymphs, carpet beetle larvae, bedbugs, silverfish, crickets and earwigs, plus all manner of bite-sized flies and moths.

No one knows exactly when they showed up, but house centipedes have shared our living spaces here in the U.S. for at least a century and a half.

By the early 1900s they were established enough to earn their own United States Department of Agriculture publication: Circular No. 48, The House Centipede. Entomologists of the time wrote, “It may often be seen darting across floors with very great speed, occasionally stopping suddenly and remaining absolutely motionless, presently to resume its rapid movements, often darting directly at inmates of the house, particularly women, evidently with a desire to conceal itself beneath their dresses, and thus creating much consternation.”

The next time you or one of your “inmates” spots a house centipede, take a moment to take a look at its many fine traits. Adults have 15 pairs of legs, neatly marked in tweedy tans and browns. Larvae, however, start out with only four pairs, adding more as they molt and mature.

The final pair of legs on mature house centipedes actually function as sensory organs, much like the antennae at the front of the animal. This added input helps house centipedes hunt with deadly accuracy; it’s also useful when they go on the prowl for mates.

You can use those rear legs to your advantage too. If you’re lucky enough to come upon a house centipede at rest, take a look at that last pair of appendages. Are they particularly long, as in twice as long as the little critter’s body? Well then congratulations! You’ve found yourself a female. So long as there are males somewhere nearby, you’re practically guaranteed continuous free, and chemical-free, insect control. Given favorable conditions-moisture, warmth, plenty of prey and tolerant inmates-house centipedes will take full advantage and reproduce with regularity. Females are capable of laying 35 to 150 eggs each breeding cycle, year after year.

A long life of dedicated to the pursuit of household pests. A robust reproductive rate. Impressive speed combined with an equally impressive number of legs. The house centipede goes beyond the realm of ordinary arthropods, ranking-I’m sure you’ll agree-resolutely among the Eek!straordinary.