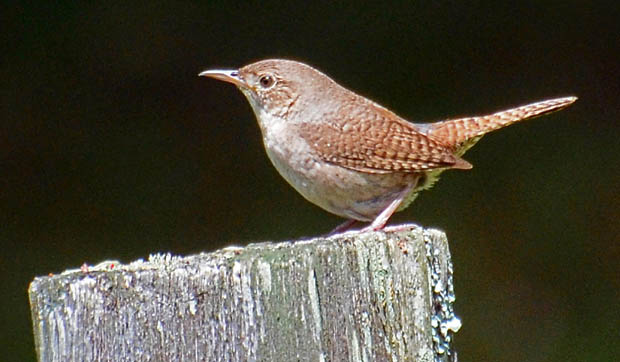 House wrens are known for their cheerful, bubbling songs but will also defend their territories by raiding the nests of nearby neighbors.

Whenever I hear the charming lilt of the house wren, I can’t help but think of Grandpa Atterberry. Save for a stint in the Army in World War I, my mom’s dad was a lifelong farmer in central Illinois, devoted to his country, his family…and house wrens.

One of the first additions to the backyard of the house my parents built in 1966 was a wren house made by Grandpa. That structure over the years drew countless wrens to our Wheaton backyard, where they flitted, sang and shared their special brand of joy throughout the neighborhood.

Or so I thought.

What I didn’t realize at the time, but have come to learn, is that those little birds have another side to them. Their bubbly songs-the quality that most endears them to their human neighbors-serve as a means of declaring territory to other birds in the area. And while that in itself isn’t unusual, the level to which they can take that declaration and defense certainly is.

Although it doesn’t happen all the time, the cheery, perky house wren, also known as the jenny wren (and scientifically as Troglodytes aedon) has been known to visit the nests of other birds in its territory and summarily, ah, eliminate the competition. The tiny bird uses its pointed beak-a structure exquisitely adapted to plucking insects, the wren’s main source of food-to puncture eggs and sometimes even toss them to the ground.

Other cavity nesters like chickadees, bluebirds and purple martins are particularly frequent recipients of this treatment but open nests like those of eastern phoebes, American robins and lots of other species can be targets too.

The small-but-mighty wren will even enter large structures in its quest to protect its turf. Marion Miller, who along with her husband Rich has worked tirelessly to educate folks in Kane County and beyond about another area insectivore, the chimney swift, sent this email just the other day:

“Just wanted to share more of the House Wren’s dark side. It appears that one punctured one of our Chimney Swift’s eggs in the Swift Tower at Brunner [Forest Preserve in West Dundee] a few years back. On a happy note it left the other 3 alone. Of course, I don’t have 100% proof since I didn’t see it happen but I did see the Wrens go in and out of the tower at times. And the puncture hole was very small. At first I had no idea what happened to the egg so I wrote to Paul and Georgean Kyle in Texas who have worked with Chimney Swifts for over 20 years. Their impression was that it was a Wren and it happens often in their towers in Texas.”

Another woman deeply involved in the observation of chimney swifts experienced similar behaviors…nearly a century ago. Althea Sherman, an avid, self-taught ornithologist, in 1915 built a 28-ft. tall, 9-ft. square tower for the purpose of watching chimney swifts. That in itself is pretty awesome but even cooler was the way she thought to design the lower portion so it could be used for storage.

As a naturalist she had collected all sorts of curiosities not appropriate for display in her home but nonetheless essential for her bird studies. Among these items was a shrike’s nest complete with eggs from which she’d blown the contents. Sherman wrote, “By accident a House Wren gained entrance to this room and was found there. Every shell of the Shrike’s eggs had been carried from the nest and thrown to the floor. Some of the shells were not badly broken and all were returned to the nest. A few days later the wren again entered, again was found there, and again the egg-shells were scattered over the floor.”

This excerpt was taken from Sherman’s treatise, “Down with the House Wren Boxes,” which ran in the March 1925 issue of The Wilson Bulletin, a quarterly journal of ornithology. Needless to say, she was not fond of the human habit of aiding and abetting what she saw as a criminal bird. Her essay was one of many at the time that indicted the practice of hanging house wren boxes. She called those bird fanciers who did “ignorant and narrow minded” and envisioned the “felonious” wrens taking over regions wherever the practice continued.

Did she have a point? Sure. If every yard throughout its large breeding range had numerous wren boxes the bird would most certainly profit from this unfair advantage. But has this happened? No.

As I write this I can hear a house wren belting out yet another chorus of his seemingly endless song. But I also can hear robins, cardinals, a chipping sparrow, a red-bellied woodpecker and a catbird that is perched right outside my open window.

As I listen, I can’t help but picture Grandpa Atterberry and Althea Sherman, up on some celestial plain, debating the merits and drawbacks of the enigmatic house wren. Grandpa was a man of few words, but I can just imagine the look on his face as she calls him narrow minded. And ignorant. He may be unleashing his own unending chorus, right about now…