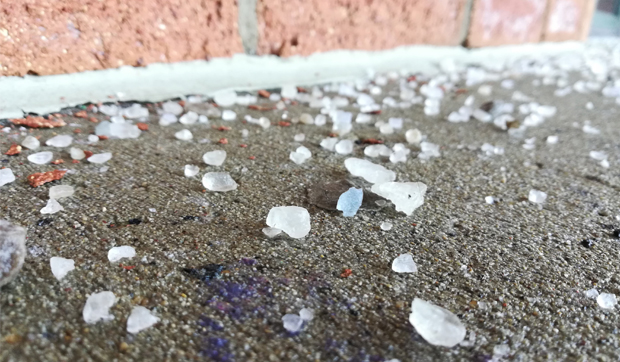 Good Natured: How Much Salt?

Pardon me, but I’ve got something I need to get off my chest, and I need to use some salty language to do it.

I apologize if I offended anyone, but I felt I just had to say something about our current salt situation.

Oh, I know, a salted sidewalk is going to prevent slips and falls, and safety has to be a priority. But the rate at which some folks dump salt down, you’d think they were trying to melt a glacier instead of a thin coating of slick stuff.

It wouldn’t be so bad if, once the ice has melted, homeowners and property managers went back out and swept up the excess salt still lying around. But more often than not, the crystals sit there for weeks, until the spring rains come and *poof* magically wash them away.

Ah, but do they actually disappear?

The thing about salt, in all its forms, is that it might vanish from our immediate view, but it still remains in our local environment. Quite often it ends up in an area waterway, which is where most storm drains lead. There the salt gets diluted but-here’s the rub-it doesn’t really go away. It persists in surface water, groundwater and our soil. And each year we add more.

Aquatic organisms bear the brunt of our salty excesses. Numerous studies have indicated that prolonged exposure to high concentrations of salt effects the health of not just fish, but also amphibians like frogs and salamanders. When deposited in water with high concentrations of road salt, amphibian eggs, which are soft and without a protective shell, hatch at a lower rate, and the tadpoles and salamander larvae that do emerge display lethargy, weight loss and physical deformities.

Interestingly enough, some species, like green frogs and bullfrogs, seem to be better able to tolerate increased salinity. Good for them, right? Ah, but if they survive and other frogs don’t, we lose diversity, which is an important part of a healthy ecosystem.

Then we have salt’s effects on aquatic insects. In one study, larvae of the green darner-our area’s largest dragonfly-were reared in water tainted by various levels of road salt. Chronic exposure compromised the immune response of the larvae, suggesting that they would be vulnerable to parasitic infections in the wild. The young darners also displayed a reduced appetite for mosquito larvae, while the young ‘skeets, reared in the same salty water, appeared to suffer no ill effects.

More mosquitoes, fewer mosquito predators, thanks to road salt. I get itchy just thinking about it.

You’re probably thinking, “Well gee, the amount of salt used on sidewalks is just a fraction of what’s spread on roads.” And you’d be right. But still, it’s not an insignificant amount. I wasn’t able to find any figures or statistics addressing consumers’ use of ice-melting compounds, but I know from my own experience that a lot are applied incorrectly.

I walk a lot of places, including to and from work, and every day I come across sidewalks literally covered in salt. I’ve picked up hunks of rock salt; I’ve swept up areas where salt was spilled. And yes I muttered a few salty phrases along the way.

In an effort to help stem the flow of salt on walkways, I’d like to share the following tips, courtesy of Salt Smart, a collaboration of organizations working to reduce the amount of salt reaching our local rivers and streams:

Working together, we can reduce the amount of salt that makes its way into our local waterways, keeping our water resources healthy and our aquatic wildlife happy. Now wouldn’t that be sweet?