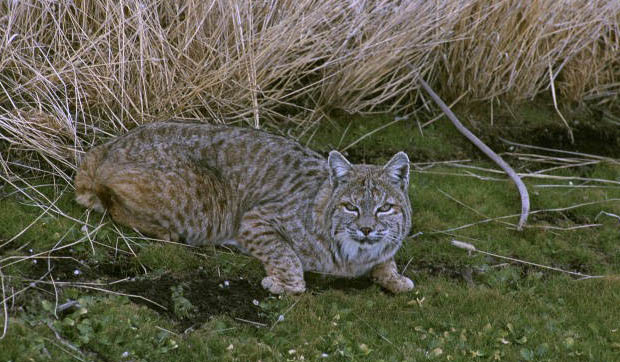 Photo Caption: Look for these elusive felines in woodlands, which are preferred for denning, and woodland edges and fields, which are used for hunting. (Photo credit: Dave Menke/USFWS)

Feral cats and even folks’ “outdoor” cats are an unfortunate part of our suburban landscape. According to data collected by the Smithsonian Conservation Biology Institute in Washington, D.C. they kill more than a billion songbirds every year.

But guess what? This week’s column isn’t about feral cats or unfortunate bird deaths. It’s about bobcats-the secretive felines whose sightings are on the rise throughout our area.

In the past few weeks, I’ve gotten several calls and emails describing bobcat sightings. These reports include a bobcat crossing Route 31 in St. Charles, a bobcat slinking along Dean Street near LeRoy Oakes Forest Preserve and a bobcat at Delnor Woods Park.

Going further back in the archives, last year I received a call about a bobcat by Good Templar Park in Geneva. And in the fall of 2015 I took pictures of what I’m pretty sure bobcat tracks in the mud along Ferson Creek.

The thing with bobcat sightings, though, is the inevitable chance of mis-identification. Due to that robust feral cat population, estimated to be in the tens of millions nationwide, there’s always a possibility that a large Felis catus, whose tail got caught in a fan belt or flywheel (I know two cats this has happened to) and is therefore bobbed, could be mistaken for Lynx rufus, the mighty bobcat.

If you’re familiar with domestic cat breeds, bobcats aren’t much larger than, say, Maine coon cats. Male bobcats average about 22 lbs. while females are a little smaller, 20 lbs. or less. Length averages from 2 1/4 to 3 1/2 feet in length, including the tail. But the kicker, and possible ID clincher, is the height. Bobcats have longer legs than domestic cats and measure up to 2 feet high at the shoulder…sometimes. Individual variation is great among the species, and there’s always a chance of sighting an immature bobcat that hasn’t reached its full size.

Complicating the chances of a proper ID are those elusive habits these cats possess–along with their tendency to favor dawn, dusk and nighttime for hunting and movement from place to place. And move they do.  According to studies in southern IL, where bobcat populations are stable, the typical home range for a male bobcat measures 7 1/2 to 20 square miles, while females roam areas of 3 1/2 to 6 square miles. A similar study in western Illinois, where the species is less prevalent, indicate the cats can range throughout 115 square miles.

So how can you be absolutely sure that the feline-ish creature you just witnesses is a bona-fide bobcat? Here are a few sure-fire traits, along with several general-but-not absolute characteristics:

In warm weather months, bobcats have yellowish to reddish brown fur, usually dappled with dark spots and streaks-an excellent means of camouflage. Belly fur is lighter, also usually with dark spots. But the key factor here is that these are USUAL traits. Which leaves plenty of room for the unusual-bobcat markings can be tiny, like freckles, or large, like rosettes. And then of course there are those with few or no spots or streaks, just to make identification even more confusing.

Lucky for us, there is one “almost always” and two absolute traits you can use to increase the validity of your sighting. One is the back of the ears. All bobcats have a distinctive white spot on the backs of their black ears. Granted, you have to be at just the right angle, as the cat is retreating, in order to see them. But they’re there.

Another is the bobcat’s namesake tail. It is indeed “bobbed,” averaging 4 in. to 6 in. in length–although on some individuals it may be longer, up to 10 in. Regardless, it will always appear short in proportion to the rest of the body. It will also always (barring any accidents) have a black tip, and this black tip may sometimes have a touch of white at the very end.

Bobcat faces often, but not always, display what is called the ruff-fur that puffs out around the cheeks and extends up to the ears. The thing about the ruff, though, is that the cats can choose to slick it back, depending on mood-a behavior that makes the ruff much less obvious.

Illinois Department of Natural Resources biologists estimate the population of bobcats at 5,000 or so statewide. Many of those cats are located south of Interstate 64, which is about even with St. Louis. Nonetheless, there are bobcat records from almost all of our state’s 102 counties.

That’s where you come in, Good Natured readers. Do you think you’ve seen a bobcat lately? Do you know someone who thinks they have? I’d love to hear about. Depending on what sort of reports trickle in, we may revisit this topic at a future date. Thanks in advance for your help.