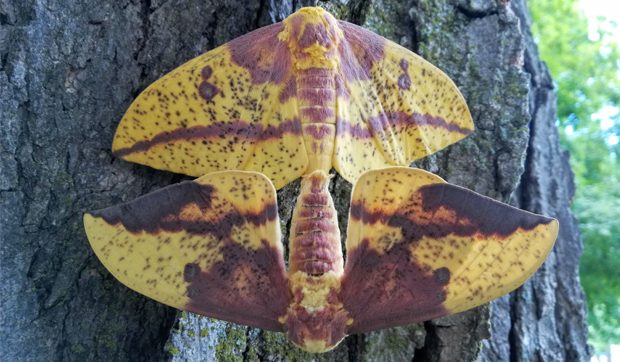 Photo Caption: Golden yellow marked with lavender and brown, the imperial moth is one of the more rarely seen members of Saturniidae, the giant silkmoth family. These individuals were spotted on a maple tree near downtown Geneva.

The other morning I got a text from my good friend Laura McKinsey. That in itself was a great way to start the day, as a Laura has keen eye for nature and always seems to spot the coolest things. (A muskrat ambling down Main St. in St. Charles; a burrowing crayfish on the prowl at Otter Creek Bend; a grapevine beetle on the oak tree in front of her house…these are just a sampling of her finds.)

Even better, Laura has a penchant for sharing. She founded and led Wild Rose School’s popular Woods Club for most of her teaching career, introducing thousands of kids to the wonders of the outdoors; she also instilled a fondness for wild things in her daughters Kate and Elizabeth. Both have worked in the nature department at the park district. In fact, Laura has too, having taught summer nature camp since the 1990s.

At any rate, several of Laura’s recent texts actually have been forwards from Elizabeth and contained images of the curiosities in her Geneva yard. In early June was a photo of a helmet-head cardinal-that is, a cardinal missing most of the feathers on its head, creating a look reminiscent of an old leather aviator helmet. (This phenomenon is somewhat common at this time of year, and is thought to be caused by a bad molt pattern, or ectoparasites, or maybe both.)

A week later a text featured a photo of an American robin, a.k.a. robin redbreast…altho this particular individual was more of a robin spotted-with-white-breast. An absence of melanin in some of its feathers caused it to look as though it had been splattered with white paint.

Then came last week’s text. Let me tell you, it was a humdinger. I almost dropped my phone in my corn flakes!

Eacles imperialis is the least often seen of the four giant silkmoth species we have in our area (the other three being cecropia, luna and Polyphemus). Like their cousins, imperial moths start life as an egg, which hatches into a caterpillar (a lumpy and some would say ugly caterpillar, but more on that in a minute) that then proceeds to feed on some of a range of local trees, including several species of maples and oaks.

I know people always get nervous when we start talking about hungry caterpillars feeding on our dear trees. But imperial cats are not typically present in big enough numbers to inflict any damage.

As summer marches forward toward fall, you might be lucky enough to find an imperial caterpillar in or near one of your own trees. In fact, last Labor Day weekend my coworker Lara Piner shared a photo of one found in her St. Charles neighborhood. It was big, probably 3 in. or so, and not terribly, shall we say, pretty.

The caterpillars of the other local silkmoths generally are considered chubby and even kinda cute. Picture Heimlich from the movie A Bug’s Life. They’re bright green with assorted small spots and minimal hair; cecropia has the added attraction of colorful, spiky knobs down the back.

But imperial moth cats? Wellll…Let’s just say they have a look only a mother could love. That is, if their mother had a lifespan of longer than a week. (That’s right… Giant silkmoths do all their eating as larvae. Once they’re in their adult stage, they don’t feed. In fact, they can’t feed, as they have no mouthparts. They have just enough fat reserves to find a partner and mate before they die.)

Picture a brown (or green) stogie with a thin coating of wispy white hair. Add a row of white or yellow dots down each site and top it off with some horns-two pairs of what entomologists would call spined tubercles-and you’ll have a pretty good idea of what an imperial moth caterpillar looks like.

I suspect it was this distinct homeliness that led the imperial moth to play a major supporting role in one of my favorite novels, A Girl of the Limberlost. In the book, published in 1909, author Gene Stratton Porter writes of the trials and tribulations of Elnora Comstock, an awkward young girl who over time blossoms into a beautiful young woman-not unlike the transformation the imperial moth caterpillar undergoes during its metamorphosis.

Moths of many types are part of the story line, as cash-strapped Elnora collects and sells them to fund her education. (Collections of natural objects commanded quite a pretty penny 111 years ago.) At various times throughout the book she tries to capture the elusive imperial, but meets with little success. It’s not until the end of the book that the haughty Edith Carr-Elnora’s rival for the affections of the fetching and financially well off Philip Ammon-finds a newly emerged imperial moth and presents it to Elnora as a sort of peace offering. Elated at the gift, Elnora responds, “How perfectly splendid! I don’t even know how to begin to thank you.”

In 55+ years of chasing after bugs, I’ve only found two imperial moths, and one of them was tattered and quite dead. So splendid pretty much describes the way I felt getting to see not one but two imperial moths on that recent July day in Geneva. I’d never even known they were there if wasn’t for the gracious text I received. Laura and Elizabeth, if you’re reading this… I don’t even know how to begin to thank you!