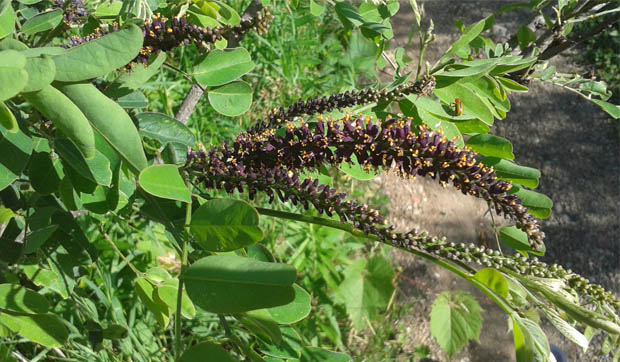 Insect pollinators-some more obvious than others-cluster about the flower spikes of Amorpha fruticosa, a shrub whose many common names include indigo bush, false indigo and river locust.

Native pollinators have been in the news a lot lately and, for the most part, the reports have not been good. Powerful pesticides combined with a lack of suitable habitat and consecutive years of severe weather have taken their toll on these vital organisms.

So you can imagine my joy the other morning when, walking in the Hickory Knolls Natural Area, I spotted a cloud–not of rain, nor smoke, but rather insect pollinators! Several species of solitary bees, along with assorted beetles, were clustered about the flowers of Amorpha fruticosa, or indigo bush. The wee beasties were busy as, well, bees (and beetles), taking full advantage of what must have been a bounty of pollen and nectar.

Before we go any further, I have to tell you, indigo bush is one of my absolute favorite flowering shrubs. I well remember the first time I spotted it, growing along the east bank of the Fox River in North Aurora. Its flowers’ stunning hues of royal purple and deep orange literally stopped me in my tracks. Equally intriguing was the way these blooms were arranged, in long clusters at the end of the plant’s erect branches.

The leaves reminded me of a locust tree, but it wasn’t until I got back to my office, and our copy of Kane County’s Wild Plants and Natural Areas, the “bible” of local flora penned by naturalist icon Dick Young, that I found out why. After identifying the plant as indigo bush, I read that it, like honey locust and black locust, is a member of the Fabaceae-the legume family.

Mr. Young also noted that indigo bush’s “attractive 5-in. flower spikes are a lacy, stamen-laden blend of orange, purple and blue in early June and are followed by inconspicuous seed clusters soon shredded by small birds.” Sure enough, a month or so later, when I went back to look at this gorgeous new, or at least new-to-me shrub, little remained of the tiny pods the flowers had formed.

Back to the other day… I was walking along the natural area trail we refer to as the Archery Road, scurrying to meet up with our morning walkers, the Happy Hikers. (Shameless plug: The group meets every Wednesday; summer start time is 8am at the Discovery Center’s front entrance. Fee is free! Just let me know if you’d like to join us.)

At any rate, as I passed a bank of indigo bush, the cloud of insects caught my eye. I halfway expected them to be mosquitoes, given the number of pokes I’d felt already that morning. But no. Although some were not much bigger than a skeeter, the insects were definitely not in search of blood.

A wonderful variety of native bees-dark ones, lighter ones; some yellow and black; some green-bounced between the richly hued blooms. Hover flies, whose bold stripes make them look very bee-like, swooped in as well and moved from flower to flower. A ctenucha moth, its black wings providing stark contrast to its orange head and iridescent dark blue body, fluttered in too to take a sip or two of what was proving to be some very popular nectar.

I was standing in front of the flowers, mesmerized, when the Hikers came along. Together we watched the spectacle and marveled at the activity inspired by pollen and nectar. We were about to move along when another creature joined the party amid the petals. A honey bee!

Although not a native species, the newcomer was notable in a number of ways. For one, even though she was just an average-sized worker bee, she appeared giant next to her native counterparts. Her fuzzy, pollen-flecked body actually made the flower spike droop a bit as she crawled around its surface.

The honey bee’s arrival got me wondering from where she had come. Over the years we’ve had several wild “bee trees” in the natural area, but none of those nests was still active, as far as we knew. Had she flown a great distance to partake of the indigo bush bounty? Or did she hail from another, yet-undiscovered, wild colony on the property?

And what about all those native bees?  Were any residents of the Hickory Knolls Pollinator Tower? Located directly behind the nature center, this wonderful display introduces visitors to the vast variety of native bees and explains their important role in our local ecology.

Just as those insects were busy spreading pollen that morning, it’s our hope that the display, combined with education by our interpretive naturalists, can help spread the word that pollinators of all types could use our help.

Simple steps like limiting the use of lawn chemicals and pesticides, and opting to landscape with native plant species-like indigo bush-can make a big difference in the lives of these little creatures. If enough of us make the effort to change our ways, we could very well help pull our beneficial insects from their current slump. And if that’s not good news, I don’t know what is.