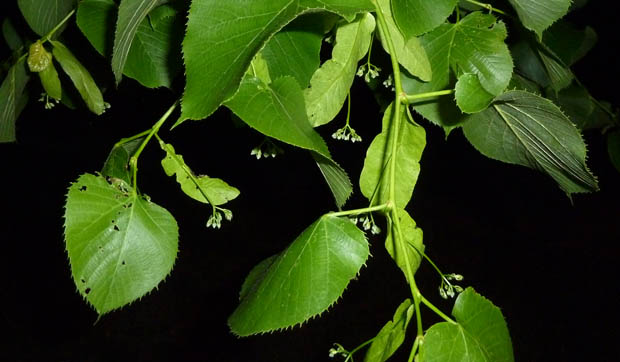 Basswood, a.k.a. linden trees are in bloom throughout the area. The flowers’ sweet, intoxicating scent can travel hundreds of feet and is particularly noticeable on warm, humid nights.

I could be wrong, but I’m pretty sure St. Charles has laws preventing public intoxication.

Yet there I was the other night, stumbling in the dark, head back, eyes squinty as I tottered from tree to tree. No doubt about it, I was drunk-entranced by the heady smell of basswood in bloom.

To be perfectly honest, it took me a minute to identify the sweet fragrance-just the same way it takes a while to recall certain spring wildflowers, and the songs of various warblers. When you only see or hear–or smell–something for a short time once a year, it can take a while to remember what’s what. Especially when you’re “under the influence.”

The time was around 10 p.m., and I was out for a walk with my pal Joey, a cattle dog mix. He was sniffing, as dogs do, at just about everything, and I was looking, as naturalists do, at the odd things that pop up at night-beetles on the sidewalk, moths in the air… But then, about halfway through our walk, I noticed I too was sniffing, picking up on a lot of odors I normally don’t-cigar smoke, wood mulch, pine needles, recently cut grass. And then, the basswood.

Admittedly, my nose doesn’t work as well as I’d like it to, and it’s certainly nowhere near as good as Joe’s, but the other night was a little different. It was more humid that it had been in a long time. And humidity makes it easier to smell stuff. The moisture in the air helps trap scent particles and makes them easier to detect.

So there we were, canine and human, sniffing avidly in the darkness. It took me about a block to figure that the smell was basswood, and another 20 minutes or so to figure out where it was coming from.

Have you ever tried to identify trees in the dark? Box elder, Norway maple, red maple, silver maple, black walnut, honey locust, an enormous mulberry… I must have visited 15 trees or so before I found what I was looking for. Along the way I tripped on a couple of roots and stepped in a hole, adding to that impression of drunkenness

Finally, there it was, the basswood. Or probably more correct for an in-town species, linden. Basswood and linden are the common names for a group of different species that belong to the same genus, Tilia. T. americana, or American basswood, is our native species, while certain other, smaller-leafed species and cultivars usually are the kinds planted in suburban neighborhoods.

As I stood there admiring the tree’s delicate blooms and inhaling their sweet fragrance, I quickly realized I wasn’t alone. Sure, Joe was still with me, but he was busy rolling in something on the parkway. No, the other visitors to the linden tree were winged. Insects of many types, from true bugs to tiny midges and of course moths, were flocking to the tree as well, no doubt to take advantage of its sweet nectar. (Ever tried basswood honey? It tastes just like the blossoms smell. Yum.)

I also couldn’t help but notice the large number of small stems, known as suckers, coming up from the base of the tree. Suckering is a classic basswood trait and makes the tree easy to identify, at least when it’s light out. (Reminds me of a joke the late great botanist Floyd Swink used to tell. He’d wait until he had a group of people standing around a basswood, eagerly waiting for him to impart his wisdom. He’d then ask the question, “How can you identify a basswood?” and listen patiently as individuals would point out the lop-sided heart shape of the leaf, its alternate (rather than opposite) branching pattern, the fibrous quality of the inner bark. He’d smile and nod and agree that those were all good characteristics and then deliver his punchline. “You can tell a basswood,” he’d say as he pointed to his audience, “by all the suckers around it.” Ba-dum ching!)

Anyway, I just checked the weather forecast, and our current humid conditions look like they will continue for the next few days. But the basswood blossoms? Once they’re out, they don’t last long. Take advantage of the opportunity, if you can, to head out for a walk this weekend. Breathe deeply, through your nose, and drink in the sweet smell of basswood in bloom.