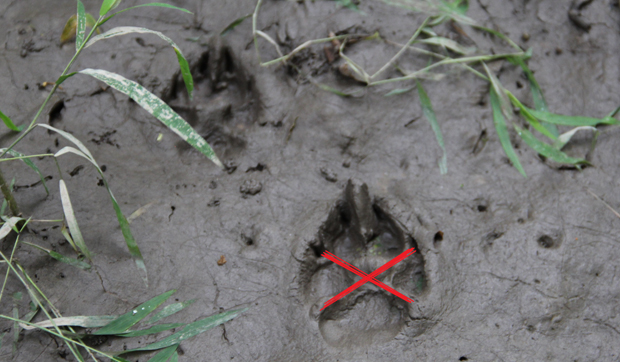 Tracks of members of the Canidae, or dog, family, have spaces between the toe pads and heel pad that, when viewed with just a small amount of imagination, form an X.

This week we continue our series on winter wildlife tracks with a look at man’s best friend, Canis familiaris; its cousin, Canis latrans, the coyote; and its more-distant relative Vulpes vulpes, the red fox.

All three types of mammals have feet with a heel pad and four toe pads. Generally speaking, when you look at a track from a dog, either domestic or wild, it’s oval in shape. You can trace a rough X through the gaps between the toe and heel pads, and you also can usually see imprints from at least a couple of the claws. (Cat tracks, by contrast, are roundish. You can’t draw an X due to the shape of the toes and claws. And their retractable claws typically don’t leave marks unless the substrate is very soft. Basically, cat tracks are a different animal altogether. No pun intended.)

So let’s say you’re out for a walk, and you see dog-like tracks in the mud or snow. How the heck do you tell who it was? The first questions I try to answer 1) Where was the animal headed? and 2) Who were its traveling buddies?

If the tracks wander willy-nilly, checking out trees, fire hydrants and heaven knows what else, chances are pretty good you’re looking at the tracks of someone’s pet. Double-down on that bet if they are accompanied by shoe or boot prints. But if the tracks proceed in a pretty straight line, with no human companion, you’re probably looking at a coyote or fox.

If you’re more of a facts and figures person, you can use these measurements for reference:

The trouble is, some foxes are quite large, and some coyotes are quite small, leading to quite a bit of overlap. So, what I tend to rely as much as measurements is context. That is, where are these tracks you’re working so hard to decipher? Are you in a natural area that has several hundred acres of open space? A large park? A golf course? These locations are most likely to be traversed by coyotes or dogs…with the occasional fox.

Likewise, are you in a neighborhood that has houses with porches, decks and/or sheds built up a foot or so off the ground? These familiar habitats usually are home to dogs and foxes…with the occasional coyote.

See how that works? I know, it’s confusing. That’s where observation skills come into play. Once you’ve found the tracks and know the context, you need to check for other evidence too, namely:

Yet most distinctive, to my eye anyway, is the “flourish” at the end of each deposit. It makes me think, every time, of the “Dairy Queen swirl” at the top of a chocolate-dipped cone. Domestic dogs aren’t nearly so fancy.

Also, because scat is a way of communicating as much as it is a means of relief, coyotes and foxes tend go near the center of paths and trailways. By way of contrast, dogs, whose unadorned scat is round and has a grainy texture, tend to step off to the side.

These spaces are also very appealing to a number of other local mammals, including raccoons, skunks and opossums. Next week we’ll take a closer look at the tracks and other signs of these Big Three of suburban wildlife tracking. Til then, watch where you step, pay attention where others have stepped, and start stepping up your tracking game!