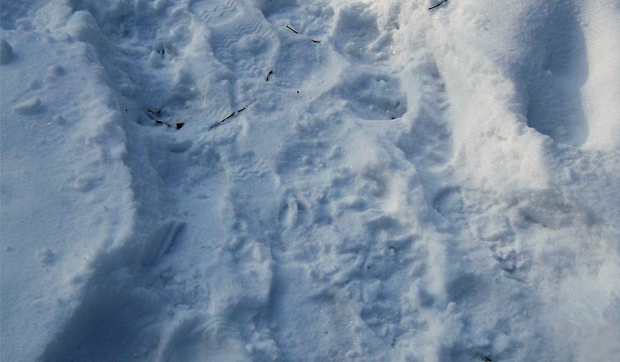 If you get up and out early, you might be lucky enough to follow a single animal’s tracks through pristine snow. However, well-traveled trails are more the norm in our suburban natural areas. Can you spot the wildlife sign among these many prints of boots and shoes?

We all have ways of keeping up with current events. Some of us watch TV; some read the newspaper or online sources. Personally, I like to study the sidewalk.

Each morning as I walk to work I find so much I need to get caught up on. The squirrel that cavorts between a horsechestnut tree and muddy prints from the fox that hangs out by the Hickory Knolls rain garden. The opossum tracks, complete with tail drag, that came up from one drain pipe, crossed the walk, and scuttled down to the pipe on the other side. The owl pellet at the base of a light post.

These are the sorts of current events that make up a naturalist’s news day. The only problem is that, outside of nature-nerd circles, it’s the kind of information that goes largely unread.

Because right here, over the next several weeks, we’re going to try and share the various tips and tricks we use at home and in the field to decipher the messages animals leave behind in the snow, the mud and, yes, even on the sidewalks, so that you too can read all the news that was fit to, uh, imprint.

You may be thinking, gee whiz, literally volumes have been written about the art and science of tracking. The thing is though, many of these are regional, or even national, in nature. You’ll see elk and moose tracks described alongside mule and white-tailed deer. But in our area, unless something really weird has happened, the only species that’s a possibility is the last one. The other animals’ ranges simply don’t extend to northeastern Illinois.

Instead of creating a comprehensive guide to tracking North American mammals (and maybe a few birds) we’ve put together what I like to think of as the “Casablanca” approach to wildlife tracks and sign. That is, each week we’re going to “round up the usual suspects” that occur in our assorted suburban habitats-yards, parks and alleys, woodlands, wetlands and prairies-and provide you with the information you can use to make a positive identification of the signs they’ve left behind.

To start things off, this week we’d like to, first, provide you with a list of those “usual suspects,” animals to keep in mind as possibilities as you view tracks and other signs. Then, in the weeks to come, we’ll provide you with more information on groups of animals as well as individual species, with the goal of making you fluent in-or at the very least aware of-the habits of our most common wild neighbors.

Our round up will include:

For those of you eager to get going, I’d like to challenge you to commit this list to memory and refer to it in the coming week as you begin to observe the signs around you. Should you spot some animal tracks, crosscheck them against this list-you’ll probably find you can eliminate anywhere from several to many “suspects” right off the bat.

Keep these tips in mind too:

One last note… If you can, track down a copy of Tracking and the Art of Seeing by Paul Rezendes. This book first opened my eyes to this amazing way of viewing nature’s current events. As a wildlife photographer, Mr. Rezendes has pursued many a quarry following only vague hints of tracks or other signs. It’s a book I highly recommend reading-and one that, along with our upcoming columns, certainly will aid you in keeping up-to-date on neighborhood nature news.