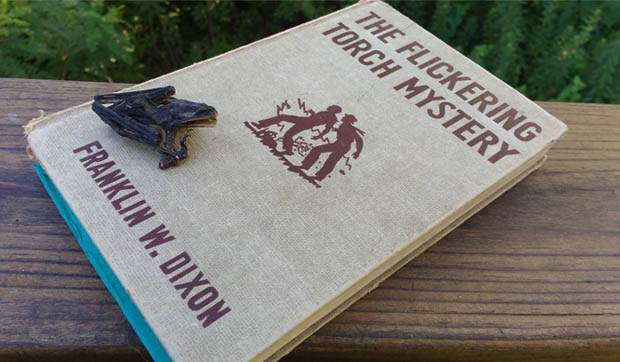 Just like the Hardy Boys and Nancy Drew, naturalists lead lives full of mysteries too.

Recently I came across a treasure trove of memories from my childhood, in the form of several boxes of Hardy Boys and Nancy Drew mysteries. (The actual tally was Hardy Boys 52, Nancy Drew 1. Ol’ Nancy, bless her heart, was just a little too privileged for my taste. Never mind that the Hardy Boys had their own convertible, motorcycles, a speed boat named The Sleuth and endless funds for travel and adventure. They were cool, and handsome too, as depicted in the pen-and-ink illustrations.)

Anyway, last month I read a first-edition version of The Flickering Torch Mystery, a Hardy Boys escapade published in 1943. The book was pretty progressive for its time, I’d imagine, as the subjects of hydroponics and silkworm propagation aimed at producing a “superworm” were both central to the plot.

I was enjoying this trip back in time one Sunday morning when I nearly tripped myself, over an object I at first thought had been coughed up by my cat Jimmy. But closer inspection revealed something quite different, and it got me thinking…

What if the group of authors writing as Carolyn Keene and Franklin W. Dixon created a series of mysteries that involved an investigative naturalist? I even came up with a name for her, Cat Ocala (from Catocala, the genus of my favorite moths, the underwings) and could gladly contribute many true-life conundrums, complete with titles and synopses that would read something like these:

The Case of the Non-prescribed Burns – Each year in springtime, a local natural area goes up in flames. The timing is perfect and the plant communities benefit greatly. Yet the burns are conducted not by staff ecologists but rather a mysterious character known as The Arsonist. Authorities are baffled. Can Cat crack the case? Does she even want to, given the way the prairies flourish post-burn?

The Missing Water Snake – Donated as part of a display on river ecology, the young Nerodia sipedon seemed secure in its enclosure. But suddenly, like dissolved oxygen on a warm day, it was gone. No marks on the glass, no screened lid left ajar. Did someone take the cantankerous little reptile, or did it vanish into thin air? Cat combs the area and even climbs into the indoor turtle pond in her search for clues.

The Secret Scat – Something is pooping on a porch in St. Charles. The resident believes it to be a rodent, but Cat has noticed the small pellets contain insect parts. Have they been deposited by bats? Shrews? Follow along as she searches for additional signs like kill sites and points of entry as well as greasy spots on the rafters. Special bonus insert! “Why Big Brown Bats Have Oily Fur.”

The Crayfish in the Khakis – Back in the office after a creek walk, Cat feels a strange crawling sensation on her right calf. Too big for a tick, too wet for a spider, the creature turns out to be Orconectes rusticus, the invasive rusty crayfish. Cat’s curiosity about crayfish ecology is set aside as she sets out to answer the bigger question of “How did this thing get in my pant leg?? I was wearing waders, for heaven’s sake!”

Four Hundred Mantids – Three dozen praying mantis egg cases are donated to the nature center. All are from introduced species, the European Mantis religiosa and the Chinese Tenodera sinensis. Cat gives the egg cases, called oothecae, ideal conditions, including warm temperatures and ample humidity, yet only two hatch. What key quality is missing from the indoor environment? And why are these species so successful outside when they’re so darn picky inside?

There’s Something About Grubs – Grubs come in all shapes and sizes and frequently cause consternation among homeowners. Asked to identify these immature beetles, yet lacking a field guide that depicts larvae, Cat endeavors to raise various individuals to adulthood so she can teach herself how to tell them apart.

The Great Chipmunk Chase – In the midst of a tremendous thunderstorm a chipmunk enters the nature center. It immediately dives for cover under the musk ox exhibit, a large display with a cavernous base. Knowing the damage Tamias striatus can cause indoors, Cat experiments with several devices including long-handled nets and a live trap baited with birdseed. Will her strategies succeed or will she have to resort to The Giant Snap Trap?

And finally, the puzzle that started it all…The Mystery of the Dried-up Frog – Cat loves wetlands, and frogs too. But it’s been months since she caught something from the order Anura and decades since one escaped in the house. Still, the object in the hallway is definitely a desiccated frog, most likely Lithobates pipiens, a northern leopard frog. How did it get there? Where did it come from? And perhaps most important, where should the delicate item end up? Cat contemplates these questions and more in her quest for closure.

I’d like to list more thoughts, but it seems I’m out of both space and time. Plus, I need to find my stash of craft supplies. I’ve got something fragile but fascinating I think would make a really awesome refrigerator magnet.