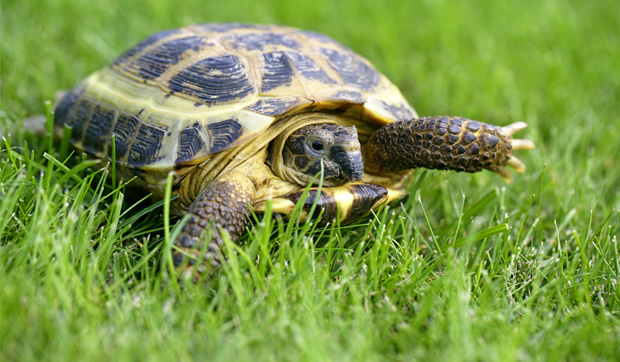 Does it have a domed carapace? Do its feet lack webs? If so, chances are good you’ve found a turtle in need of rescue. Pictured here is a Russian tortoise, one of several species kept as pets that turn up in parks and preserves and, sometimes, just walking down a sidewalk.

Good Natured: Is That Big Turtle Native, Or Not?

Over the past couple of weeks we’ve been talking tortoises. First we reported on the escapades of Ding Dong, a 70-lb. sulcata tortoise who took himself for a stroll and caused a stir; next we addressed the topic of tortoises and box turtles as (very) long-lived pets with complex care needs.

This week the theme continues with one last installment-one that arose as a result of the first two articles. Several people have written or called to ask the question: If you see a turtle out walking around, how do you know whether it’s a wild species within its home range, or an escaped or released pet?

Here in northern Illinois, with only a couple notable exceptions, the turtles we see are primarily aquatic in nature. Here in Kane County, for example, painted turtles, sliders, spiny softshells and snappers are the species most commonly seen.

Swimming is an essential skill for these water dwellers and the shape of their shells reflects this attribute. The carapace, or top half of the turtle, has a very low rise and is smooth in texture; in fact soft-shelled turtles are sometimes likened to pancakes due to their flat, leathery-looking shells. This streamlined profile lets these turtles slip into the water with nary a ripple and, powered by webbed feet, swim with great efficiency.

Any turtle that matches this description is within its native range and, unless it’s in imminent danger, does not need any assistance from humans.

Terrestrial turtles, however, are another story.

They typically have domed shells and, while they can swim if they have to, making a quick getaway is not part of their repertoire. Some, like the marsh-dwelling, state-endangered Blanding’s turtles, and the box turtles that occur downstate, have a hinge on their lower shell-the plastron-that helps them close up tight (like a box!) and protects the head, legs and tail.

Spotting a turtle in this latter group is definitely reason to pause and take notice. Thanks to a variety of factors, including habitat loss and road mortality, Blanding’s turtles are exceedingly rare in our area. I remember taking a call a few years ago from a reader who’d found what they at first thought was a very large box turtle, but it turned out to be a Blanding’s turtle roaming in DeKalb County. We were able to put the finder in touch with the wildlife biologists studying this species, who then added that individual to their records.

Box turtles too are worthy of note, because with the exception of Will County their natural range does not include northeastern Illinois. Yet still we find them in places they’re not meant to be: up against a curb on a busy street; in between the rails of train tracks; even chugging across a lawn or sidewalk.

And then we have the nonnative species.

Russian tortoises, threatened in their native range in Central Asia, are pretty popular in the pet trade, with many retailers and online sources touting their small size (up to 8 in. in length) and undemanding nature. But if you read the small print you’ll learn that these appealing animals have specific dietary needs and absolutely require UV lighting for proper shell development; they also have a lifespan of 40 years or more.

I’ve handled more than a few Russians-Russian tortoises, that is-that have either escaped or been released. Among the first traits that pop out at me are their shell shape, which is slightly domed, and their color pattern. The center of each carapace scale is brownish to black but fades to yellow around the edges. The legs are stocky; the feet clawed but not webbed; and the head is more often than not out as they eagerly explore their surroundings-a behavioral trait that can lead to escapes and eventual homelessness.

So far, the turtle species we’ve discussed have fallen in the small-to-medium portion of the chelonian size range. But there are instances where turtles in the large-to-jumbo range appear.

To be clear, our native snapping turtles can get to be around 20 in. in length and weigh up to 35 lbs., and our spiny softshells can grow to 15 in. and weigh more than 25 lbs. They are large, for sure, but seem small when compared to some of the tortoises that have been found out and about.

Ding Dong, you might recall, weighed somewhere in the neighborhood of 70 lbs; same for my friend Peggy’s sulcata, who was pictured in last week’s column. I’ve also recently made the acquaintance, via Facebook, of another rescued sulcata, one Poopy McTortoisebutt, who’s 60 lbs. All three animals, by the way, are still growing, and none would be able to survive in the wild due to our cold winters. Thankfully they’ve got good homes with owners committed to the long haul these long-lived species require.

So what should you do if you spot a turtle that clearly is out of place?

Here in Illinois we are blessed with several rescues that specialize in reptiles. But which one you contact depends on where you live. To make things easier, let me offer this Good Natured solution: Email me! My address is below. If you include a photo or two, even better. Working together, we can make sure the animal gets to a place of safety, be it a humane society, foster home or, yes, animal shell-ter.