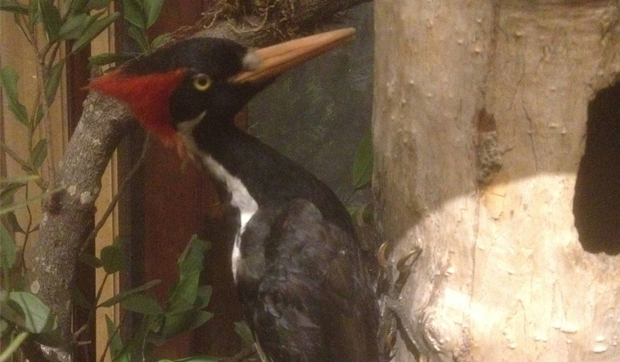 Although the last undisputed sighting dates to 1944, some experts still question whether the ivory-billed woodpecker, shown here as a taxidermy mount, should be declared extinct.

This week marks 14 years since I began writing Good Natured. Fourteen years! While the number itself isn’t really worthy of landmark status, it is a milestone of sorts, and something I thought we might like to celebrate with a special sort of nature topic. But what?

As I began to consider just which aspect of our local nature scene might merit the honor of a 14-year prelude, my mind naturally drifted to the rare and unusual. River otters were my first choice…but we covered them in 2014-the same year we wrote about wolves, which are another riveting topic. Badgers? They’re awfully cool, but they were profiled in 2009 and again in 2016. Bobcats? Neato for sure, but we wrote about them in 2017.

I took a break to snack on some only-slightly-stale fruitcake, under the auspices that chewing helps me think, and that’s when it hit me. What we’re really looking at here is an anniversary of sorts. And anniversaries, Hallmark has taught us, are rich in symbols. Paper is the representative gift for one year of wedded bliss, and of course 25 years is silver and 50 is gold. But 14? Is there really an item or element that represents a non-remarkable year like that?

It turns out, there is! Ivory. Not the soap, but the precious white stuff plundered from elephants and other rare mammals. No way I was going to go there. But that word did direct me toward a story that indeed requires telling-or re-telling, if you’re into birds: the ivory-billed woodpecker.

Campephilus principalis is a species that’s been in the news recently, though the news itself isn’t great. After years of extensive surveys, the U.S. Fish and Wildlife Service last September proposed delisting the ivory-billed woodpecker, along with 22 other species, under the Endangered Species Act due to… extinction.

Yes, the E word. The one that means gone forever.

Not to belittle the other 12 birds, eight freshwater mussels, one fish and one plant, but including the ivorybill in that proposed rule added impact unlike any other. Because this species isn’t just an Oh My Gosh Bird, or a Holy Smokes Bird but, honest to goodness, a Lord God Bird.

This is a woodpecker so massive, and so magnificent, folks back in the day would utter that phrase in awed reverence. Picture a bird a skosh bigger than an American crow, predominantly black but with bright white stripes on the neck and wings and, in males, a shock of red feathers on the head that would make Woody Woodpecker green with envy. Then factor in an enormous bill–light colored, with eyes to match–and it’s no wonder heads would swivel, and swear, when the birds flew by.

A denizen of southeastern swamps rich in old-growth trees, the ivorybill at one time could be found as far north as southern Ohio and Illinois. Although its scientific name means primary caterpillar lover, it fed mostly on beetle larvae and other insects, which it excavated using its namesake mandibles.

That bill was vital to the bird’s survival, but it also was attractive to humans-the creatures who would figure most prominently in the ivorybill’s demise. In the 18th Century, naturalist Mark Catesby wrote, “The bills of these Birds are much valued by the Canada Indians, who made Coronets of ’em for their Princes and great warriors, by fixing them round a Wreath, with their points outward. The Northern Indians having none of these Birds in their cold country, purchase them of the Southern People at the price of two, and sometimes three, Buck-skins a Bill.”

It’s true, people killed ivorybills, for food in addition to those beaks. But perhaps most damaging was humans’ impact on the birds’ habitat that led to their presumed demise. Growing demands for lumber and land shrunk the areas that ivorybills deemed suitable, such that by the 1880s the bird was considered rare.

Sightings, though widely spaced, continued into the 20th Century. Ornithologists documented the bird with photographs in 1924-a time when many people considered the species extinct–and with motion-picture film in 1935. The last sighting that everyone agrees was a bona-fide ivorybill was in 1944.

But it’s hard to keep a good bird down. Large and legendary, ivorybills and stories of their sightings persist to this day. For every expert who affirms the bird is gone for good, another says it still exists. Video footage from 2004 is debated as hotly today as it was when it was released. Ten apparent sightings that occurred between 2006 and 2008-14 years ago-met with mixed reactions too. The believers say yea while the naysayers say…nay.

It makes sense then that when the USFWS issued its proposed rule back in September, its suggestion of extinction caused a flap. The agency has responded by extending the comment period, for the ivorybill’s status only, to February 10.

I lack the credentials to register a sound, research-backed comment. But privately, or maybe not so much so, I’m one who holds out hope that this splendid species still persists. You can prove something exists, but you can’t prove it’s gone, right? And the thought of the species one day making a comeback? That’s the stuff ivory(bill) dreams are made of.