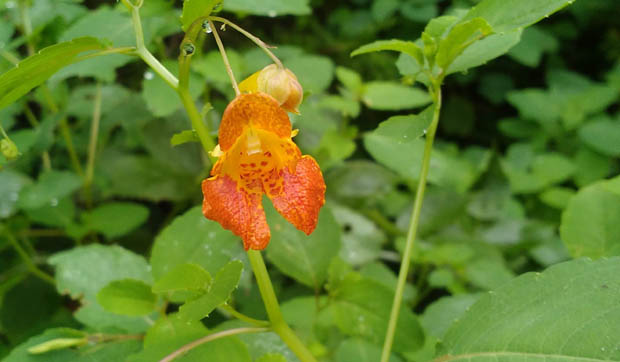 Jewelweed, a wild cousin of garden-variety impatiens, features colorful, tubular blooms and leaves that cause water to bead up and sparkle like iridescent gems.

It’s probably safe to say, we all have a wild cousin or two. You know the type… Loud garb; unpredictable behavior; the family member most likely to give Grandma a fright.

And now, as you sit and ponder just how you and your kin measure up, I’m going to jump ahead to another family we all know and love: Balsaminaceae, the balsam family, and its largest genera, Impatiens. That name should be familiar to anyone who’s ever set foot in a greenhouse or garden center; in fact, I’ll bet every suburban block across the country has at least one yard with some cultivar of Impatiens walleriana-the “busy Lizzie” of bedding plants respected for its bright blooms and tolerance of shade.

You might think it would be hard to outdo flowers with trademarked names like Fiesta, Infinity and Rockapulco, but I tell you what: Impatiens capensis trumps them all.

Commonly known as jewelweed, this wild cousin of the garden-variety impatiens definitely brings a lot to the party.

Let’s start with its scientific name. The species name capensis is notable for the fact that it’s based on a mistake. Dutch botanist Nicolaas Meerburgh was under the impression that jewelweed, which is native to North America, was from the Cape of Good Hope. (This kind of thing was pretty common way back when. Common milkweed has the name Asclepias syriaca because Linnaeus thought it came from Syria. And Norway rats, Rattus norvegicus, actually originated in East Asia. But I digress.)

The genus name Impatiens, however, is spot on. It’s Latin for impatience, and that’s exactly what jewelweed is, at least when it comes time to disperse its seeds.

Wrapped up in tubular packages that look kind of like little green bananas, jewelweed seeds burst forth at the slightest touch-a filament of fur from a passing animal, or even a breeze that causes adjoining leaves to rustle. The sensitive seed capsule is made up of five sections, or valves, that coil up and fling the seeds anywhere from a few inches to a few feet, depending on how well hydrated the plant is.

Fancy scientific words for this method include ballistic seed dispersal, or ballistichory, and explosive dehiscence. But I prefer to think of it as the Glenn Mechanism.

Glenn was a fellow student in Northern Illinois University’s outdoor education masters program. A former football player, Glenn was a gentle giant of a man who was wise in many ways. But one thing he’d never encountered was jewelweed.

During a field trip to Severson Dells in Rockford, Glenn happened to comment on the plant and its colorful blossoms. Sensing the opportunity to make a memory, our professor asked Glenn to try and pick one of the seed packets dangling from a nearby stem.

What ensued was a squeal that, almost 20 years later, is probably still echoing across Severson’s dolomite cliffs. Wild-eyed and shaking, Glenn leapt back and waved his arms as the hurtling seeds landed around him like so many tiny missiles. Of course the rest of us couldn’t resist either and what was supposed to be an instructive lesson in trailside interpretation turned into one massive seed-popping extravaganza.

None of us will ever forget, jewelweed’s other common name is Touch Me Not.

Something else unforgettable is what attracted Glenn to the plant in the first place. Jewelweed sports flowers that are bright orange, dotted with deeper orange bordering on red. The five petals form a tube that practically shouts “Come hither!” to passing hummingbirds, which are one of the plant’s main pollinators. (Note: A less-common species, Impatiens pallida or yellow jewelweed, can occasionally be found

Jewelweed likes shaded, moist environments and often can be found keeping company with two other plants of note-poison ivy and stinging nettles.  Legend has it that rubbing jewelweed’s succulent stems on skin that has been exposed to either of these irritating plants can ease the itch and pain. I’ve tried it but, being averse to both itching and pain, have always hedged my bets by also scrubbing with soap and water and a washcloth. (Fun fact: If you do find yourself nettled, wait 10 minutes or so before rubbing. This time period lets the chemicals in the sting dry and makes them easier to wash or wipe away.)

Something I’m a little more eager to experiment with is those ballistic seeds. They taste like walnuts, I’m told, and can be eaten as is, sprinkled over salads or stirred into cookies, cakes and other sweet treats. They might be just the thing to serve at your next family gathering, in a dish even your wild cousins would enjoy.