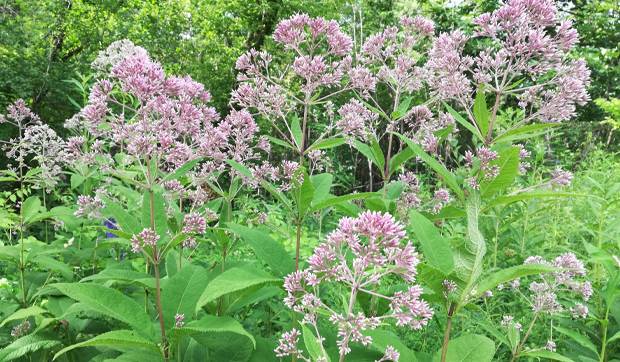 Joe-Pye weed, a name sometimes preceded by the adjective sweet or purple, grows in full sun or lightly shaded woods throughout the region.

Is there anything more delectably satisfying than a nice pie? My own preferences run toward a double-crust fruity variety, with the top five being strawberry-rhubarb, peach, boysenberry, cherry and blueberry. With that said, I’ve never said no to anything with pie in the name-including pot pie, shepherd’s pie and yes especially pizza pie. (Now that’s amore!)

So it should come as no surprise that, 20+ years ago, as I was entering this wild and wonderful career of nature education, I was absolutely head over heels to learn that we have a local wildflower named joe pie. My mind raced at the many options. Would it be considered savory, or sweet? Dough or graham-cracker crust?

I was considering these possibilities-honing in on something in a tangy tomato base, a la sloppy joes, but with cheese-when I saw the name of the plant written out: Joe-Pye Weed.

Ah, but the crushing despair that sprang from an illusion shattered didn’t last long. For as I read the species account for Eupatorium (now Eutrochium) purpureum I learned that the plant not only is a native “pleasing perennial” (as described by famed local naturalist Dick Young) but also has a fascinating cultural history.

The name Joe Pye, it turns out, dates back at least a couple hundred years. It first appeared in print as joe-pye, all lowercase, in the 1818 tome A Manual of Botany for the Northern and Middle States by botanist Amos Eaton. His description of the plant was brief and to the point: leaves in fours or fives, petioled, lance-ovate, serrate, rugose-veined, roughish: stem hollow. 5 or 6 feet high.

Ah, but naturalists I worked with back in the day said the name Joe Pye, was capitalized, and referenced a fellow who a) used the plant to cure disease; b) peddled it and other cures in an old-timey medicine show; and/or c) was a revered Native American known for his knowledge of medicinal plants.

That basic but nonspecific explanation was good enough for me, for many years. But as 2021’s woodland wildflower season unfolded, and as Joe-Pye weed started popping up practically everywhere, including my own yard, I realized it was time to take a deeper dive into the man, the myths and the legends surrounding this iconic summertime bloom.

It didn’t take long to find out that someone else had already done the heavy lifting on the topic. In 2017, the journal The Great Lakes Botanist published Joe Pye, Joe Pye’s Law, and Joe-Pye-Weed: The History and Eponymy of the Common Name Joe-Pye-Weed for Eutrochium Species (Asteraceae), a comprehensive and peer-reviewed article by Richard B. Pearce and James S. Pringle.

The 20+ page report has a lot of rabbit holes, including tales of Old Jo Py, Joseph Pie and Jo Py Junior, and an endearing story of how a Native American Joe Pye was forsaken by his New York Abenaki kinsmen for his association with European settlers, but nonetheless sent seeds with his people as they headed west. His hope, the story goes, was that he could follow the trail of flowers to one day be reunited with his family and friends. The authors rated the tale highly as important folklore but deemed its origins questionable.

So who was Joe Pye? Pearce and Pringle traced the name to a Mohican sachem, or leader, whose given name was Shauquethqueat. Born in 1722, he became a sachem around 1777, and was prominent member in the community of Stockbridge, NY. He adopted the name Joe Pye and, like many indigenous people, used plants in many aspects of his daily life.

He sounds like a great man. But how did his name become linked to a woodland wildflower? To paraphrase the researchers’ conclusion, lots of people knew Joe Pye; they saw him collect E. purpureum, and/or suggest its use for treating fevers and/or saw it growing near his home. Over time, Stockbridge residents began referring to the plant as Joe Pye’s Weed and its usage soon became widespread.

I could be wrong, but it sure sounds like Joe Pye was pretty famous, way back when; in fact the association of his name with a useful plant could count among North America’s first celebrity endorsements.

And who wouldn’t want to have their name attached to this delightful plant? Described as splendid and, in some books, towering, Joe-Pye weed makes a statement in local woodlands as well as native plant gardens throughout our area. It’s easy to grow and attracts a variety of pollinators too, including long-tongued bees like miners, leaf cutters and bumbles, as well as butterflies, skippers, and moths.

Beautiful and beneficial, with a fun history to boot, E. purpureum ranks among our top native plant species that are nice as-say it with me-Pye.