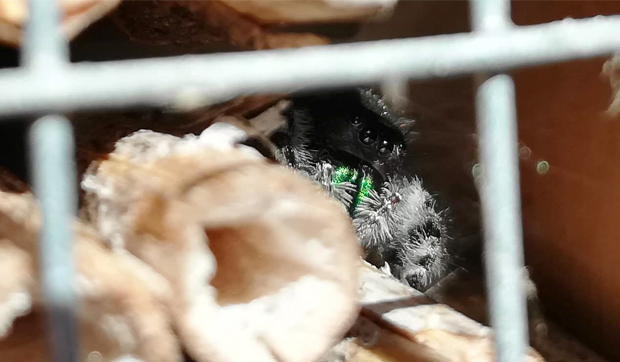 A bold jumping spider, Phidippus audax, has moved into the pollinator tower at Hickory Knolls, a perfect location from her point of view.

Good Natured: The Jumper and the Pollinators

Think about it. Where are the thickest, juiciest spiders? In webs near outdoor lights. Why? Because of all the insects-a.k.a. spider fodder-that are drawn to them.

Visit any riverfront park, or bridge, or shop window, and you’re sure to see a multitude of orbweavers taking advantage of the insect abundance that comes along with summers near streams. Though mostly cross orbweavers, a species introduced from Europe, these chubby gals have found that in summertime, the living truly is easy-provided you’ve chosen wisely with regard to real estate.

But a few weeks ago, I found a spider who trumps them all. She’s big as a bumblebee, happy as a clam, and living web-free (well, almost) in our pollinator tower, the outdoor exhibit we created to educate folks about the importance of native bees.

I guess now we need to add an interpretive panel on the mechanics of food chains.

The spider we’re talking about is audacious and bold, qualities that are reflected in her scientific and common names: Phidippus audax, the bold jumping spider. This species’ dauntless nature is reflected in its other common name, the daring jumper, and the success of our individual audax is reflected in her bulbous abdomen, which is one of the biggest I’ve ever seen.

I’ve watched this spider in action, and she really is a sight to see. Creeping from her silken lair, which is used strictly for shelter and not for catching prey, she proceeds in that skittery sort of hop-step for which jumping spiders are known.

Her two enormous forward-facing eyes are alert to any sort of movement, be it by prey or predator, and give her an endearing quality not unlike-hear me out here–a winsome teddy bear’s soulful stare. (The spider’s two big eyes also direct your attention away from her other six, which even I’ll admit can be kinda creepy.)

Once she becomes accustomed to my presence and realizes I’m no threat, she assumes a stalking stance I like to think of as a lady in waiting. Scanning the area, she waits for an unwary pollinator. (Her targets usually are types of mason bee although lately I’ve also noticed a type of fly buzzing about the display. Is it parasitizing the bees, or making use of the habitat we’ve created? I don’t know. At least not yet.)

Meanwhile the mason bees are coming and going, hovering like so many tiny helicopters as they orient and choose just where to land. From the bees’ perspective this behavior is essential; they need to pick out which hole is their home nest from the hundreds of choices the tower presents. But from the spider’s perspective, the constant stream of bees is like one continuous all-you-can-eat buffet.

Except that the entrees have eyes too. And Miss Bold Jumper, big as she is, these days is hard to miss. Over the past few weeks, as the bees have become more aware of her presence, she’s had to hone her hunting skills and improve her technique. But judging by her girth, she’s managed her professional development well.

At this point you may be thinking, “Wait. Is this really fair? You’ve built a habitat that’s supposed to foster the success of native pollinators, and now you’ve gone and a predator move in? Why don’t you get that spider outta there??”

Well, the thing is, the spider isn’t doing anything wrong. She’s just doing what she does best, being bold and daring and, often, hungry. Through keen observation, and a nice dose of luck, she’s found the perfect location to carry out her life’s work, which is controlling insect populations. That her home base happens to be a display we built for what we’ve determined to be a beneficial insect…well, that’s on us, not her.

We’ve put up a structure and created a habitat to suit our purpose-supporting pollinators-and she’s exploited it to her best advantage. Like her cousins in their webs by outside lights, she’s simply acting on the resources we’ve provided: shelter, food and location, location, location.