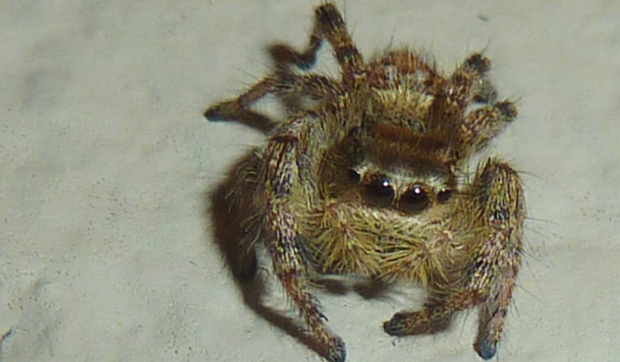 With large eyes and fuzzy bodies, jumping spiders frequently are referred to as the ‘teddy bears’ of the spider world. About 350 species occur throughout North America.

What could be more comforting than this cherished icon of childhood? Cuddly, wide-eyed and ever vigilant, teddy bears have kept watch over kids of all ages for more than 100 years.

Okay, now that you’re feeling all warm and fuzzy, maybe you want to go brew a cup of soothing herbal tea, wrap up in your favorite blankie and ponder happy Teddy thoughts. His huggable softness. His sewn-on smile. The way his bright, engaging countenance reminds you of the family Salticidae.

I’m not sure which scientist was the first to notice the similarities between teddy bears and jumpers, but there’s no doubt these tiny eight-legged critters are some of the cutest arachnids around.

I was reminded of this likeness the other day at work when a little jumping spider caught my eye. It was perched just above the time clock, and pivoted toward me as I flipped on the lights. It seemed to keep its eyes on me, just as I did on it, then hopped onto the clock itself. Maybe to punch in?

(I briefly considered wages for this little one. It definitely wouldn’t work for peanuts. Maybe beetles, though. Or flies…?)

Now, let’s be clear about one thing. I find jumping spiders irresistible. This fact, combined with the knowledge that I still had a good hour or so before I had to teach a class, made my next few actions relatively predictable. I grabbed a hand lens and proceeded to have some jumping spider fun.

I first examined the intricate markings on this small, less than half-inch long, brown-and-white specimen. Four pairs of white dots decorated its abdomen, and each tiny leg bore bands of black. I contemplated, for a moment, whether these markings would be helpful in identifying this individual to species. But, for once, I decided to heck with its ID. I would just enjoy the spider for what it was-a beautiful creature that, for all I knew, was just as curious about me as I was about it.

Looking at its pedipalps, or palps for short (the structures at the front of the body that look like another pair of legs, but actually perform a variety of functions including sensing and feeding) I didn’t see little bulbs on the ends. Had they been present, they would have looked a little like tiny boxing gloves. They also would have indicated that Jumpy was male as, yes, up front is where male spiders carry their reproductive parts.

An absence of bulbs there though didn’t necessarily mean that I was looking at a female. Spiders develop over a succession of molts, and it could have been that this particular individual was still too young to have “gloves.”

As I stared at it, it stared back at me with its giant eyes- the features that, combined with the spider’s overall fuzziness – are most responsible for its teddy bear-ness. While jumpers, like all spiders, have a multitude of eyes, these guys have two in particular that are large and prominent. Winsome, even.

The spider’s other six eyes are arranged around these two, one on either side and four more on the sides of the head (which is actually a combined head and thorax. This cephalothorax, sometimes also referred to as a prosoma, is one of the characteristics used to distinguish spiders from insects, which have separate head and thorax body parts.)

Not only are the jumping spider’s eyes impressive – and expressive – to look at, they also are endowed with special abilities. Research indicates that jumping spiders’ eyes are capable of perceiving video images. That’s right, these spiders can watch television.

Scientists at the University of Cincinnati played images of insects on teensy screens, then observed jumping spiders’ behavior. Lo and behold, the jumpers acted appropriately, and were judged to be interpreting the video images as real. (And who among us humans hasn’t done the same thing? I remember watching the sitcom Mr. Ed every week as a kid, and vowing that one day I too would own a talking horse just like Wilbur’s.)

Not that jumping spiders have a lot of time to sit around watching videos. With survival as a priority, they spend much of their time on the prowl, using those big eyes and their powerful, compact bodies to stalk, and pounce, on prey that includes many types of arthropods, even other spiders.

As I sat admiring the bold little spider, she – or he – up and did what salticids do best. He, or she, jumped, and was gone. Perhaps there was a delectable prey item close by. Or another spider. Or maybe, unbeknownst to me, there was something good on TV.