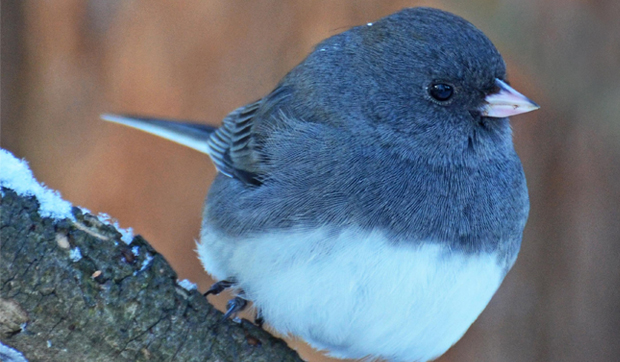 The dark-eyed juncos have returned! Also known as snowbirds, juncos can be identified by their dark gray back and white belly. This coloration of ‘leaden sky above and snow below’ is said to signal that winter is on its way.

Every year, in early spring, someone notices an American robin, and people rejoice. “Spring is here!” they exclaim, even though we might still have temperatures in the 30s and snow in the forecast. (And despite the fact that more and more robins are choosing to overwinter right here in northern Illinois. But that’s another story for another time.)

You’d think, with all the hoopla these days over pumpkin spice everything, that we’d be experiencing a similar celebration about fall. I’ve heard a few folks saying they’ve been looking forward to sweater weather, as well as a comment or two about the leaves changing color. But when the bird most closely tied to the arrival of autumn-or maybe more correctly, the coming of winter-blew into town last week, I heard hardly a peep. From people, anyway. The birds themselves though were chattering away.

That’s right folks, the snowbirds are back. Dark-eyed juncos, those chunky, gray members of the sparrow family, have arrived.

Juncos are birds of coniferous forests, with summer ranges that stretch far into Canada. As cooler weather approaches, they head south. But not necessarily the deep South. Many juncos choose to spend the winter right here in Kane County.

In contrast to American robins, which come in just one variety, juncos have several subspecies. In our area we typically see the slate-colored junco. True to its name, it has a dark gray back, along with a light belly. Males tend to be darker than females, sometimes almost black, while females have a brownish cast. The giveaway feature is the outer tail feathers, which are white, and flash when the bird flies away.

You might want to take that white flash as a cue to start observing juncos. They might not at first seem all that interesting because, my goodness, if there’s birdseed around they’re everywhere. But it’s that commonness-that ease of observation, that makes them so noteworthy. If you take the time to watch, I guarantee you’ll be richly rewarded.

First of all, study the way they feed. While the occasional bird may peck from a feeder, for the most part juncos forage on the ground. They use their feet to scratch about, performing a sort of birdie cha-cha as they search for seeds. And if you’re lucky enough to have grasses with seedheads, woohoo! You might even get to witness the birds “riding” the stems. That is, they land near the cluster of seeds at the top; then, as their weight causes the stem to bend, they ride it to the bottom-kinda like a catapult in reverse. Safely back on the ground, they can then pluck away at the seeds in the way they are accustomed.

As you watch them feed, you might see yet another neat junco-ism: their pecking order. Males are dominant over females, and older birds trump younger ones. Even if you’re not 100% sure of the differences between males and females, I’ll bet you can sort it out just by watching who gets to feed first, and last.

So intriguing are these and other behaviors that, a few years back, a group of biologists and filmmakers from Indiana University collaborated to produce a film, Ordinary, Extraordinary Junco. Some of you might remember, we collaborated with Kane County Audubon to host a screening at Hickory Knolls.

If you missed it then, or even if you saw it but would like to watch it again, there’s good news. It’s available to watch, for free, online at www.juncoproject.org. Well, sort of. The website is undergoing some repairs. It still has all the pages describing the project, but to actually view the film, which is divided into segments, by topic, you’ll need to click on the link on the home page: https://vimeo.com/user3004053.

Here’s a little tidbit to get you started: Juncos appear to be right-eyed. That is, when on predator patrol, these little birds look up with their right eye, not their left. Just the opposite is true of another wintertime visitor, the American tree sparrow. Although in the same family as the junco, this bird scans with its left eye, not its right.

The next time you find yourself looking at birds, check out the junco. But, if you can, use both eyes.  You wouldn’t want to miss a minute of this bird and its bright, bustling behaviors-sure signs that fall has arrived.