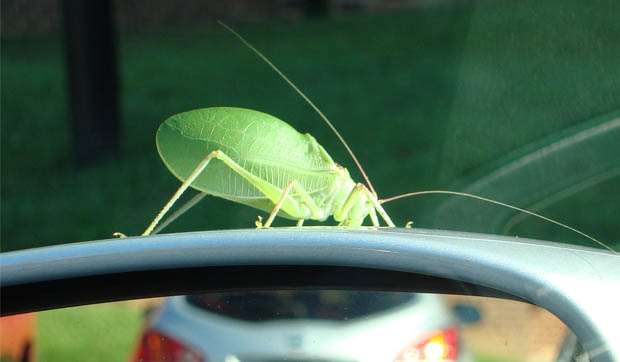 Green and leafy looking, true katydids are nearly impossible spot in the treetops they call home. But away from their habitat, these large and harmless insects are hard to miss.

Long ago, the story goes, a newlywed couple was found murdered in their beds. Although the crime was never solved, the primary suspect was the bride’s jealous and jilted sister Katy. To this day, they say, Kate’s guilt is debated by one of summer’s most famous singing insects:

Such is the human interpretation of the call of the common true katydid, Pterophylla camellifolia, an insect known better by its sound than its appearance. And it’s no wonder. These guys hang out way up in treetops, and look like leaves themselves.  (In fact, Johan Christian Fabricius, the Danish zoologist credited with naming the species, was so taken by this camouflage he noted it twice. Pterophylla translates to wing-leaf and camellifolia further explains that the wings are shaped like camellia leaves.)

In our area, katydids began their discussion at the end of July; the chatter will wage on, night after night, until the last of the bunch succumbs to autumn’s hard frosts.

Although we tend to think of katydids and their cousins, the grasshoppers and crickets, as singers, they technically are fiddlers. To make their loud sounds, katydids draw the rough edge at the base of one forewing across the ridged edge of the other forewing in a scraper-and-file method of sound production known as stridulation.

The reason for all the noise is simple. It’s mating season in KatydidLand. The strident, repetitive calls are the sounds of males calling for females, who listen for and then select the mate they deem fittest.

A human female in a similar situation might cup a hand against her ear to distinguish amongst the calls, but a female katydid does no such thing. Aside from the obvious problem of lacking hands, katydids “listen” with sensory organs located not on their heads, but rather on their front legs, just below their knees.

Male katydids listen to other males and alternate their calling frequency, creating rowdy choruses of back-and-forth discourse. On warm nights, the volume can be considerable-as loud, or louder, than a 2003 BMW F650CS motorcycle engine. (This is cutting-edge scientific data here folks. I tested it myself, on my bike, at the corner of Peck Rd. and Dean St. in St. Charles about two weeks ago.)

Female katydids listen and make their choices accordingly, often basing their choices on which male was first to call-even if it was only by a few milliseconds.

You don’t have to have ears on your knees, or a motorcycle, to listen in too. Just head out to an area with mature trees, right around dusk. The rhythmic two- and three-note calls are impossible to miss. But don’t count on seeing the insects themselves. For that it’s best to wait until daylight.

Especially if the previous night featured rain or wind, there’s a good chance you can find a katydid or two beneath the trees where you’ve heard them call. They’re good-sized insects, about the size of a woman’s thumb, with grasshopper-style legs and antennae as long as their body. Females are all green and have a curved ovipositor extending from their hind end; males are mostly green but have a brown patch known as the stridulatory field just behind the head.

It’s true, I’m a fan of katydids and their raucous ways. But I’ve learned over the years that not everyone shares this love. From time to time we receive calls-complaints, even-about loud sounds coming from the sounds of park district trees. One caller in particular was quite vocal in expressing her displeasure, and left a memorable performance of clicks and cricks in her voicemail objecting to the noise.

It didn’t take long to respond when she asked what kind of animal had made the sound. Thanks to her apt description, the answer was simple: Katy did.