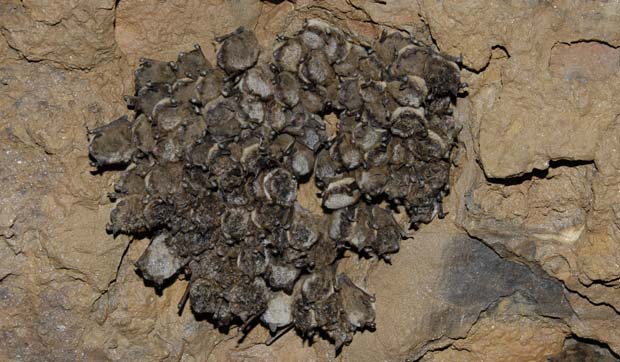 Bats can be divided into two groups, solitary and colonial. In our area, little brown and big brown bats are the colony-forming species that, from time to time, take up residents in attics, barns and other structures. (Photo credit: Tim Krynak/USFWS)

This time of year, nature folk are abuzz (or aTwitter, if technologically inclined) about the wonderful diversity of birds that have returned for the summer breeding season. Red-winged blackbirds-the males, that is-and robins (including those that never really left) were among the first, followed shortly after by grackles, tree swallows, chipping sparrows and yes, those fascinating but vexing devils the cowbirds.

But there are some other creatures that are on the move too. This group of animals has its fans, but it also has its detractors-those furry flyers, the bats.

In our area, we have several species that can be divided into two different groups based on behavior: solitary bats and colonial bats.

Solitary bats, as their name indicates, roost and breed singly in trees along the edge of woodlands. Colonial bats, by contrast, gather in large groups. In our area, we have little brown bats, Myotis lucifugus, and big brown bats, Eptesicus fuscus. (For bat-o-phobes, ust so you don’t have nightmares, big brown bats aren’t really that much bigger than little browns; average wingspan is about 12 in.)

The colonial species are the ones most likely to be found near humans, thanks to the structures we create.House attics, barns and bridges are a few examples of where these bats tend to congregate, to mixed reactions from their human neighbors.

Some people welcome bats and put up bat houses to encourage the critters. (Although…if you’re hoping bats will eat all your mosquitoes, you may end up disappointed. They’re tiny morsels compared to the meaty, big-game insects like moths and beetles. When you’re hungry, which would you prefer, a few grains of rice or a thick slab of meat? Bats are the same way.)

At the opposite end of the spectrum are the people who’d prefer that bats stay the heck away. Interestingly, according to my wholly unscientific research, it seems that these are the folks who end up with bat colonies in their attics and behind their shutters.

If you or someone you know falls into this latter class, don’t despair. Bat-friendly organizations offer lots of tips for discouraging bats without harming them in the process. Here, for example, are a few tips from our new friends at Texas-based Bat World Sanctuary Inc.:

Why do bats choose to live in human structures?
The increase of human expansion has resulted in a loss of habitat for colonial bats, forcing them to look for alternative roosts to live in and raise their young. Roof voids, attics, vacant buildings and barns all provide bats with warm, safe places to hide and live.

How do I keep a bat from roosting under the overhang of my porch?
Occasionally, a single bat or two will take up temporary residence under the eave of a porch. These bats simply are in need of a short-term roost.  If left alone, the bat will probably leave on its own when the weather turns cooler. However, some people have found success in getting a bat to leave by suspending aluminum foil or helium-filled Mylar balloons close to the roosting spot (note, the balloons need to sway to deter the bats). These items may interfere with a bats echolocation abilities and help to dissuade it from roosting in that location.

How do I get bats out of my building? What does and doesn’t work.
Repellent devices are not effective. One Chicago manufacturer was fined $45,000 by the EPA for misleading claims about an ultrasonic device. In fact, when ultrasonic devices were tested by bat experts some of them actually attracted bats! Moth balls are not effective because they evaporate quickly and require frequent replacement. Additionally, chemical toxicants should never be used to solve bat problems. It is a violation of federal law to use a chemical in any way other than for what it is strictly intended, and currently, there are no poisons or chemicals licensed for use against bats. The illegal poisoning of bats may create health hazards and liabilities for property owners. Poisoned bats will die inside the walls and ceiling, creating bacteria and odor, and dying bats may fall to the ground both inside and outside the property where they are more likely to come into contact with children and pets.

Traps are not recommended and have actually been known to drive bats to the inside of a structure. Trapping is also extremely inhumane. They are positioned to block the exit of the roost and can quickly fill with bats as they emerge to forage for insects at night. Once trapped, the bats are unable to escape and those that fell in first become crushed as others fall on top of them. The filled trap then blocks the exit for the bats remaining in the roost, forcing them to search for another way out. These bats are likely to end up inside a business or residence, greatly increasing the chance for human contact.

The only safe, humane way to evict bats from a building is by exclusion, a method of using plastic mesh to create one-way valves that allow bats to leave the roost but then prevents them from re-entering. Do-it-yourself exclusion methods as well as a list of professional bat excluders can be found at Bat World’s web site, listed below.

When should an exclusion be done?
Bats should only be evicted when no dependent young are present, which means never during the months of May through mid-September. Many states specifically prohibit excluding bats when they are raising their young. Before considering an exclusion be sure to check with your state wildlife agency to make sure you know what laws must be followed, as well as to get a specific idea of when it is safe to exclude bats in your area, which is generally early autumn. If you exclude during the wintertime and you discover hibernating bats, wait until spring and when night flying insects are present as the bats will be waking up and be able to fly out.

As for us folks in Illinois-those of us who don’t want bats in our belfries, or attics, now is the time to check your roof and eaves for soundness. Repairs now will save you from having to exclude bats later on in the year.

Many thanks to Amanda Lollar, founder and president for allowing us to reprint these tips. For more info, be sure to check out Bat World’s web site, https://batworld.org.