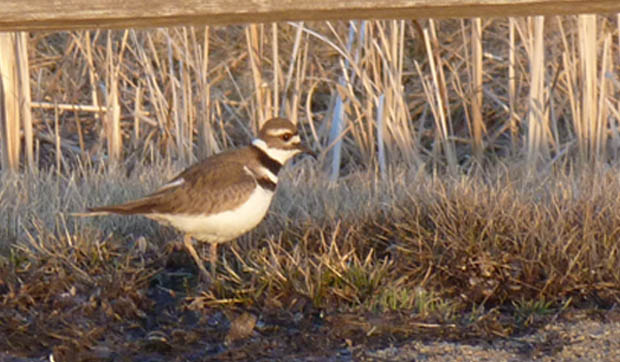 Killdeer are named for the sound of their call, but also can be identified by their distinctive markings and behaviors.

Yep, there’s no doubt. The killdeer have returned.

These medium-sized birds, members of the plover family, are famous for their namesake call – and for their propensity for repeating it over and over. And over.

Even though these birds look like they should be running along a beach-which would make sense, since most plovers are shorebirds-killdeer are an undeniable, and increasingly obvious, element of our local landscape.

Listen for killdeer whenever you’re in or near an open space. Whether it’s a natural area or farmland, a developed area with an expanse of stone, woodchips or turf, or even an asphalt parking lot near some grass, chances are there’ll be a killdeer nearby. This adaptable bird has learned to take advantage of a wide range of human-created habitats, including golf courses, playgrounds, gravelly rooftops and road shoulders.

What could they possibly find appealing about roadsides?

In a word, habitat. Although seemingly hazardous, such spaces offer the advantage of being devoid of most other creatures. And since killdeer are ground nesters, finding areas that are avoided by prowling predators gives the incubating parents and their resulting young a bit of an advantage.

In addition, killdeer are masters of hiding in plain sight. They invest little time in nest building, instead relying on camouflage to keep their speckled eggs safe.

Well, camouflage and one other quality: a remarkable acting ability.

If you’ve ever approached a killdeer nest, you’ve likely witnessed this bird’s theatrics. Mom and Dad Killdeer both are adept at feigning injury, that is, scuttling about with one wing dragging, as if broken. The hobbling and thrashing is an impressive performance indeed, one that often succeeds in luring away the perceived threat.

But if more drama is needed, killdeer are prepared. The birds also will sit on a pretend nest that is some distance from where the actual nest is located, then dart to another spot and plop down again. After several rounds of running and plopping, predators and people-present company included-often get confused as to where the actual nest is.

If the killdeer’s success is measured, not in acting awards, but by statistics, it would appear that the bird is doing just fine. According to Kane County Audubon’s Spring Bird Count data, killdeer numbers have increased fairly steadily over that last 40 years, from a low of 13 birds spotted in 1973 to a high of 161 killdeer counted in 2008.

Yet life is not all sunshine and rainbows for this plucky little plover. Coyotes and feral cats take their toll, preying not only on the play-acting parents but also their precocial young, which are able to walk around and feed themselves soon after hatching. In fact, it’s estimated that killdeer may make as many as six nesting attempts before successfully fledging one chick.

Keep your eyes open for killdeer in the sort of places you’d expect-like meadows and mudflats-as well as unexpected spots-like the parking lot by the PetSmart on Randall Road, where I saw a killdeer the other day. Killdeer are brown on top and white underneath, with two black bands across the throat and chest. They also have longish legs which they use to scurry across the ground and chase after their insect prey.