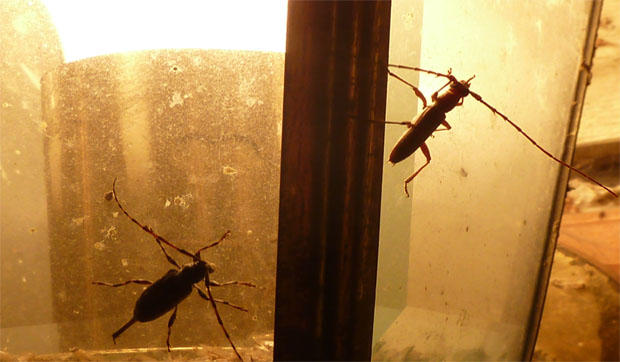 Two long-horned beetles found themselves attracted to the light, and each other, on a recent summer night.

The other night, even though I was dog tired, I stepped outside for a bit of fresh air before bed. It’s a simple exercise, one I take part in frequently, and something that typically takes only a minute or two.

But this time, I made the mistake of glancing up.

Usually, I know better. Especially this time of year, when warm nights give rise to all sorts of insect activity: The moths. The beetles. The . All were swirling about the light on the deck, and all are irresistible to this nature girl, even at bedtime.

But as I watched our usual cast of characters carry out their nightly business, a new player caught my eye. It was a long-horned beetle of some sort, small, but with an appendage I’d never seen before: an ovipositor protruding from the tip of her abdomen.

Well, shoot. Bedtime was going to have to wait.

I went inside and grabbed my camera, then headed back out, with Joey my faithful pup at my side. First he sat, but then laid down; he could tell this was going to take a while.

As I fussed with getting just the right angle on the beetle, which was posed rather inconveniently on the pane of the light fixture, I noticed a bit of movement just to my right. Lowering the camera, I turned and saw a male long-horned beetle, undoubtedly of the same species as the girl on the glass.

He alit on the sliding door and began crawling toward the light, and Ms. Ovipositor. I chuckled a bit as I realized that he and I were captivated by the same creature-though for entirely different reasons. As he redoubled his efforts to get closer to her, I became even more determined to get the perfect pic.

I stood there hoping against hope that the female would jump off the light and head toward the male, where there was less glare, but instead he flew over to light. There the two of them sat, antennae twitching, while I stood staring into 40 watts of fire, trying again to get a decent shot.

The male, definitely the more apt of the two to fly, took off for the door once again. Naively thinking maybe I could just move the female over to him, take a picture and then go to bed, I reached over to pick her up. She was quick, though, and I was clumsy. I watched as she evaded my grasp, then scrambled up my arm and into my shirt.

This was a development neither I, nor the male beetle, could have predicted.

Lying on the deck, Joey snorted and sighed. Familiar with the fresh-air-before-bed ritual, but not tonight’s odd diversion, he watched quizzically as I danced around and shook my shirt, trying to get the beetle to drop out.

I looked up one sleeve, then the other, and brushed my hand across my belly and back. Finally convinced that she was gone, and with the male no longer in sight, I decided it was time, at last, to hit the hay.

Stepping inside, I stopped for just a moment to click through the pictures I’d taken. I then leaned over to pick up the camera case and…plop! The female beetle fell out of my shirt.

Heaven knows where she’d been hiding, but now there she was, in imminent danger of getting licked up by Joey, who was suddenly interested in the night’s activities. He was soon joined by Jimmy, the resident cat and champion insect eater.

The three of us scurried around the kitchen in pursuit of the female beetle, which apparently wasn’t inclined to fly. I grabbed her just before Jimmy did and whisked her outside, only to have her start scrambling up my arm again.

I quickly plucked her off my elbow and put her on the door frame. In a flash (though not from my camera, for it was still inside) the two beetles (lovebugs?) reunited and began their antennae twitching anew.

At this point I had two choices: Either sit back and watch what played out next, or, hallelujah, go to bed.

I of course opted for C, firing up the laptop and heading to Bugguide.net to try and figure out just which species (besides my own) was responsible for this late night folly. After a bit of clicking, I settled on a tentative ID of Graphisurus fasciatus, a species with no common name. Although its larvae have a taste for hardwoods, it doesn’t appear on any lists of insect pests. Oh, and that ovipositor on the female? As the terminal segment on the insect’s abdomen, it can also be referred to as a pygidium, from the Greek pygidion, diminutive of puge, or buttocks.

Tonight, when I step outside for some fresh air before bed, I’m adopting a new strategy: I’m heading out an hour earlier, and taking my camera and a cup of coffee. You see, there were these spiders…