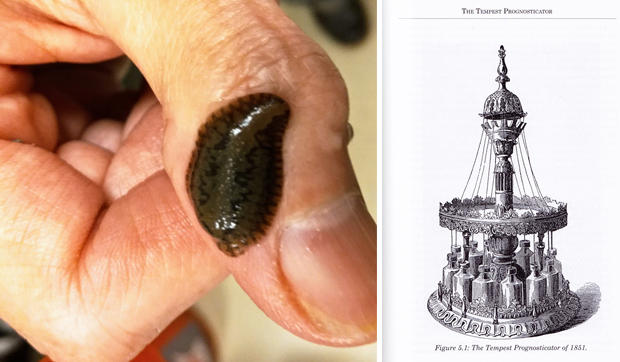 Photo Caption: Leeches as weather predictors? It could have happened, had George Merryweather of Yorkshire, England been more successful in marketing his Tempest Prognosticator, a fanciful, annelid-powered device.

“Say Pam, how’s that leech of yours doing?” said no Good Natured reader, ever.

But, just for conversation’s sake, let’s say someone did inquire about the Placobdella species we found last fall. I’d proudly respond that our little Loren is doing just fine, thank you very much. S/he (leeches are hermaphroditic, equipped with both male and female reproductive organs) spent the winter moving between the rock at the bottom and the algae on the sides of her 1-gal. glass jar. Now that summer has arrived, s/he is out and about a bit more, and even inched about on a turtle we offered her one afternoon, though s/he opted to not feed.

Partly because of Loren’s graceful, fluid movements, and partly because it’s just easier to use only one pronoun, we’ve taken to referring to Loren in the female sense. We’ve marveled at her curious nature as she’d nudge through the pondweeds that provide oxygen to her realm. And we’ve admired her appearance, her delicate patterns in raw umber and burnt sienna. (We also rejoiced at finally having use for those colors, the only two virtually untouched crayons in our vintage Crayola 64 box.)

Yet all things must change, as even leeches will attest, and last week was Loren’s turn. Her solitary lifestyle ended abruptly when she was joined by a second Placobdella, this one plucked from the carapace of a painted turtle that had dug a nest and was laying eggs right in middle of a lawn. Named Linden, for my favorite tree blossom (and for the way it had symbols for both male and female next to it on a Names for Baby webpage) the new addition has given Loren a little company, or perhaps competition, depending on your point of view. (Note to self: Add second rock to leech habitat.)

Linden’s arrival also has brought us one step closer to building our very own Hickory Knolls Tempest Prognosticator.

What’s this? The term “tempest prognosticator” doesn’t ring a bell? Well, let me tell you…it should! In fact it WILL, if we can round up 10 more leeches and a few simple sundries including, yes, a thing that rings.

The first Tempest Prognosticator was the brainchild of 19th Century physician and inventor George Merryweather. His last name notwithstanding, the good doctor was a man who saw a need to create a device that could warn of impending storms. His inspiration came from his observation of leech behavior, and how the creatures he would come to call his “philosophical counsellors” reacted to changes in the atmosphere in advance of a storm.

As a surgeon in Yorkshire, England, Dr. Merryweather was in the habit of keeping leeches in his surgery, that he might employ them to aid patients in healing. He noted (hopefully not during an actual surgery) that his “little comrades”-another of his terms of annelid endearment-would move about in “a variety of gesticulations” as bad weather approached.

“The ordinary medicinal leech is peculiarly sensitive to atmospheric conditions before the occurrence of electrical storms,” he wrote in his 1851 narrative, “An Essay Explanatory of the Tempest Prognosticator in the Building of the Great Exhibition for the Works of Industry of All Nations.” Man, did this guy love words, or what?

When storms threatened, the leeches in the bottles would squiggle upward into the tubes, bumping their little heads on the whalebones, which were wired to the chains, which were attached to the hammers, which would then ding the bell. Twelve leeches were needed because, Merryweather noted, “some appeared to be more sensitive and more prophetic than others, and some appeared to be absolutely stupid.”

He nevertheless fretted over the well-being of his charges, and in fact designed the prognosticator so that the leeches, each separate in their bottles, “might see one another and not endure the affliction of solitary confinement”.

Whatever became of the Tempest Prognosticator? Despite a robust campaign conducted by Merryweather himself, and a grand debut in 1851 at London’s Great Exhibition, public buy-in was minimal. Even the British government said no. Mention was made of the weekly cleaning and monthly feedings the leeches required, but oddly enough that the whole system relied on leeches-leeches!-was never explicitly cited as the reason for the venture’s failure.

So here we are now in 2019, and Merryweather’s sketches and narrative are abundantly available on the internet. And his contraption is so curious, so undeniably bizarre, that now I want to build one too. Most of the supplies are easy to source, and of course we’ve already got Loren and Linden. Only 10 more leeches–and a dozen whalebones–to go!