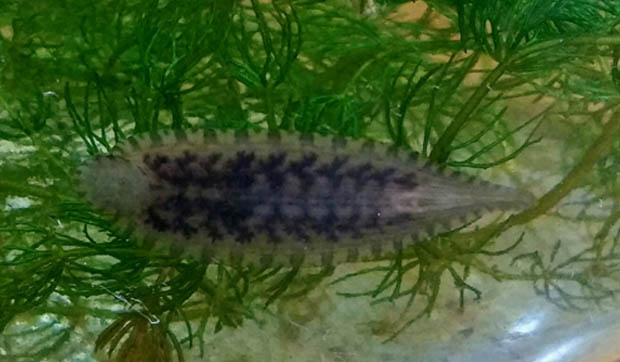 Have you ever really looked at a leech? A hind sucker, left, anchors the body while the head forges forward. The mouth can be seen too, and is light-colored and U-shaped.

Well, hot diggity! Today is that later date and folks, let me tell you, you’re in for a treat.

I know, leeches don’t have a great reputation. Thanks to movies like Stand By Me (“Aaaah! Leeches!!”) and The African Queen (“If there’s anything in the world I hate, it’s leeches. Filthy little devils!”) leeches’ mud-dwelling, bloodsucking nature has been touted far and wide.

But I happen to share a different perspective, all thanks to a book I acquired many years ago. In her Field Book of Ponds & Streams, published in 1930, zoologist Ann Haver Morgan wrote that the annelids “possess more beauty and interest than their reputation credits them” and noted that they enjoy “exquisite efficiency for their mode of living.”

With commendations like that, who wouldn’t love a leech? So you can imagine my joy when one inserted itself into one of our Wetland Ecology field trips a few weeks ago. We were wading through the marsh at Otter Creek Bend Wetland Park, surveying the plant and animal life and making connections to energy transfer through an ecosystem when the gorgeous creature made its appearance, caught in the net of an astonished fifth grader.

Unaccustomed to sunlight, not to mention fifth graders, the leech curled defensively as it was transferred to a white pan for observation. And unaccustomed to finding leeches in the marsh (this was our first such discovery in a very long time) we instructors ogled it eagerly.

If you’ve never studied a leech up close, it might be hard to tell just what you’re looking at. Their bodies are made up of many segments and in some species, like the one we found, one end is quite a bit wider than the other.

The narrow end, we reasoned, must be the head, as it is what the leech led with wherever it went. But the other end was impressive too. A large “sucker” there helped the leech anchor itself as the head and body swayed in the water we’d added to the pan.

The kids were convinced it would siphon away the lifeblood of anyone foolish enough to stick a finger in front of its inquisitive leech head, where its bloodthirsty leech mouth lurked. But guess what? Like Greta Garbo, all the leech wanted was to be left alone.

We-well, okay, I-wanted to continue this up-close investigation of the novel and unique organism but, remember, our field trip was titled Wetland Ecology, not Leeches, so any in-depth study was going to have to wait. We made a hasty decision to break our long-time rule of What Lives in the Wetland Stays in the Wetland, placed the leech in a large jar with some aquatic plants (the invasive Eurasian water milfoil) and a healthy dose of fresh marsh water then moved on to finish our lessons on photosynthesis and energy pyramids in our wonderful living classroom at Otter Creek Bend.

After the kids were safely on the bus I dashed back to the jar to make sure the leech was still okay. That’s when I realized I don’t really know what okay looks like in leeches. The specimen was flattened against the side of the jar. Does that posture mean it feels stressed? Secure? Just trying to blend in?

Since that day in the marsh, we’ve observed that our leech spends most of its time in this position inside its new environment, a gallon-size jar accessorized with milfoil. When it does move it does so gracefully, its muscular body undulating through the water in a slow and unhurried way. When traveling shorter distances, it glides along the glass by stretching its 2-in. body forward, attaching its mouth then sliding its rear sucker up. The effect is kind of like an inchworm or a Slinky, but since the leech’s body is so elastic, there’s no bending required.

It hasn’t had a meal yet so we’ve not been able to observe its feeding behavior, but I’m not too worried about it going hungry. Leeches can go a long time in between meals. And besides, to give it a proper feeding we need to figure out just what kind it is. North America is home to around 65 species of leech, only some of which are bloodsuckers. Leeches can be scavengers, feeding on dead animal matter, or predators, attacking snails, worms, amphibian eggs and even other leeches.

To make a proper ID we’re going to have to need a hand lens and some patience, looking at the mouthparts, the number of rings on each body segment and the number and arrangement of tiny leech eyes on its intricately patterned dorsum. In the meantime we’ll just take a cue from Ann Haver Morgan, and continue to enjoy the leech in all its exquisite efficiencies.