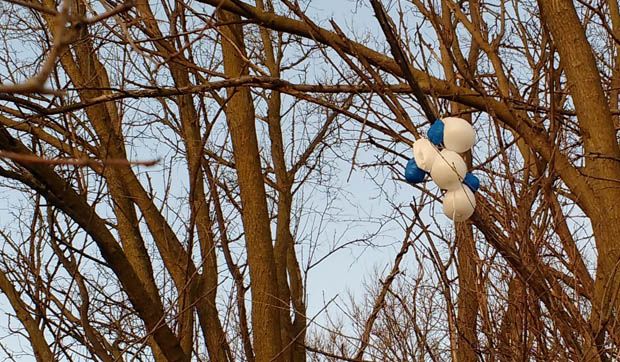 Photo Caption: Balloons, whether let go by accident or as part of an organized release, quickly transition from colorful orbs of whimsy to ugly litter.

One fine spring day in 1970-something, when I was in fourth grade, our teacher gave us a writing assignment. We were learning about geography, as well as the proper form for writing names and addresses. The exercise involved us kids carefully printing our info on notecards and tying them to balloons, which we then took outside and let go. The idea was that by including our names and addresses in the notes, we might receive a reply from the finder of the downed balloon and see how far it went.

Oh it was heady stuff all right. Having just learned about exotic locales like Africa and Asia, we all fully expected our little balloons to travel the globe. We started making bets of whose message would travel the farthest, eyes wide with possibilities. What if we got a response back but it was written in German, or Swahili? Would we be able to get it translated?

Of course some of us had our hopes dashed right away, thanks to the enormous American elm tree growing on the south side of the playground. The giant tree’s branches, beautiful and far reaching, grabbed more than a few of our colorful missives and held onto them well past the end of the school year.

As I look back on that memory from long ago, I can’t help but think, “If I’d known then what I know now…” Because airborne balloons, as happy and festive as they appear, are really just litter waiting to land.  Plus, the bright bits of rubber have the potential to bring catastrophe to birds, turtles, fish and other wildlife.

In recent years several environmental as well as regulatory groups, like Balloons Blow in Jensen Beach, FL,  and the U.S. Fish and Wildlife Service,  have started to draw attention to the harm just one balloon can cause. A string or ribbon can strangle or entangle. A deflated balloon can look like a worm or some other sort of soft and non-protesting prey, and an animal may swallow it.

I witnessed this phenomenon first hand a couple of years ago at Hickory Knolls. A rental client was hosting a large party-I think it was either a birthday or a baby shower-and someone tossed a popped pink balloon into our indoor turtle pond. I saw the stringy length of latex start to sink, and ran to the back room to grab a net to fish it out.

I thought I’d acted fast, but the Blanding’s turtles-a state-endangered species–that call the pond home were faster. It’s hard to picture turtles pouncing, but pounce they did. By the time I got the net in the water, one of the turtles had already started to swallow the balloon. Only after several minutes of gentle tugging were we able to convince her to unclamp her jaws and give it up.

But even if a wayward balloon isn’t ingested, it’s still unsightly. Like a coffee cup or cigarette butt tossed from a car, balloons end up as trash, pure and simple.

In fact, there’s a bundle of blue and white balloons trapped in a tree just south of Hickory Knolls right now. They showed up about a month ago and are still hanging there in the little box elder that’s too small to climb, amid branches too high to reach. Grrr.

What’s particularly frustrating is that balloon releases are still an accepted part of celebrations and ceremonies. Each year 25,000 orbs of future trash hit the skies before the start of the Indianapolis 500. Clemson University lets upwards of 20,000 balloons go at the start of each home football game, which translates to over 140,000 pieces of latex litter hitting the ground per season.

Then there’s the practice of releasing balloons as a memorial or tribute. I guess I can kind of understand the association between ascending balloons and loved ones in Heaven. But wouldn’t planting a tree, its branches reaching skyward, create a more lasting effect? With zero risk to the environment?

Ah, there goes the tree-hugger in me again.

To be fair, the balloon industry is well aware of the reputation its product has acquired. The Balloon Council, a Trenton, NJ-based trade organization devotes much of its website (www.balloonhq.com) to the defense of balloons and balloon releases, pointing out many times over that balloons are made of latex, a natural product, and are biodegradable.

The research cited, “A study of the effect of balloon releases on the environment,” by D.K. Burchette, was completed though never published in 1989 for the now-defunct National Association of Balloon Artists. One of the conclusions reached was that “The balloon samples appear to be degrading at about the same rate as oak tree leaves and about three times faster than small pieces of wood (oak and pine).”

I was mulling over this statement the other day as I went on a walk through the savanna area behind Hickory Knolls. I looked over toward the balloons in the box elder, then down at the oak leaves beneath my feet. They were still just as brown and leathery as they were last fall. I know though that they are decomposing, slowly, adding nutrients back to the soil as they go.

But the balloons? They really are just litter, waiting to land.