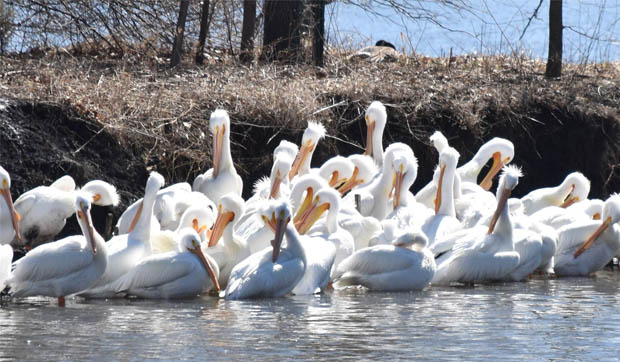 Photo Caption: A group of migrating white pelicans takes a break from foraging at Lake Prestbury in Sugar Grove. Knobs on some of the bills indicate individuals in breeding mode. (Photo courtesy of Amber Walker.)

Have you ever found yourself faced with so many great choices that you can’t possibly choose just one?

I have that problem when it comes to kitschy artwork (I have 13 different prints by C.M. Coolidge, the Dogs Playing Poker artist); ice cream (hello Moose Tracks, caramel-sea salt and coconut); and Kentucky bourbons. It’s also the reason this week’s Good Natured features three pieces de resistance: white pelicans, pileated woodpeckers and river otters. With a side of squirrel!

Let’s start with pie, as in pileated woodpeckers. (I know. Around here most folks say PILL-ee-ay-tid. But I’d pick PIE over a PILL any day.) Over the past 20 years we’ve had some very occasional sightings of these crow-sized birds. I remember hearing about one in Batavia ca. 2005, and one at Bluff Spring Fen in Elgin about that same time. But neither person I talked to at the time was absolutely certain of what they saw, nor did they have any photos.

By around 2014, the birds were being seen with some regularity in DuPage County, at places like Waterfall Glen Forest Preserve and the Morton Arboretum. Then, in 2017, talk of pileateds in Kane County began to escalate. The woods along Ferson Creek in St. Charles were hotspots in both winter and spring.

Then, a couple weeks ago, came the news we’d been waiting for. Pileated woodpeckers are nesting in Kane County! This story is still developing but I’ll be sure and keep you posted as the little family grows.

Next up, we have the pelican phenomenon. These enormous white birds usually are associated with the sunny beaches of the Gulf Coast. But in spring, their northwesterly migration takes them over Illinois, with an ultimate destination of breeding territories in the prairie potholes of the upper Midwest and Canada.

For 15 years or more these magnificent birds-their wingspan over 9 feet!-have included Kane County in their stopovers. Though I don’t remember the year, I do recall it was April 1, April Fool’s Day, when they first showed up. I was working at Red Oak Nature Center at the time, and seriously thought the caller was kidding when he said there were white pelicans at Nelson Lake Marsh in Batavia.

Since that time the birds have stopped at many local water bodies. But this year it seems like they’re being seen practically everywhere, including downtown Batavia and Boy Scout Island in St. Charles. (Thanks, Jenny Risch, for the BSI tip!)

As it turns out, there’s good reason for our pelican bounty. According to the International Union for Conservation of Nature and Natural Resources, white pelican numbers have been increasing at a rate of about 5% per year for almost 50 years.

You know what happened almost 50 years ago? The Clean Water Act was passed. Now I’m not qualified to say whether that event is responsible for the large number of pelicans we’re seeing these days, but I’ll bet it plays at least a small role. Because without clean water, we wouldn’t have many fish. And without fish, we wouldn’t have birds that eat fish. Like the white pelican, which consume about 4 lbs. of fish each and every day.

We also wouldn’t have our next animal which, I have to say, I’m overjoyed to see.

About five years ago I wrote a column titled something like I Believe in Fox River River Otters, where I mused at the possibility of otters showing up in our area. They were being seen with some regularity in McHenry County, so why not Kane?

Well, guess what? Over the past three weeks I’ve heard-and seen photographic evidence-of not one or two, but three living, breathing river otters in the Fox River and its tributaries.

My friend Corey spotted the first one along a riverbank, hanging out in the water near a large silver maple. There’s a healthy fish population along that stretch of river, plus plenty of crayfish, frogs and other clean water-loving animals that otters favor as food.

Ferson Creek has a diverse fish population too, so it’s no surprise that otters were spotted there as well. My friend Tim from Montana spotted not one but two otters as they were about to feast on a good-sized fish they’d caught.

River otters went through some hard times here in Illinois, getting hit with a triple whammy of overhunting, habitat loss and pollution from the mid-1800s to the mid-1900s. In 1977 their population was listed as threatened in Illinois and in 1989 it was downgraded to endangered. But through the combined effects of reintroductions and rising populations in nearby states, Illinois river otter numbers began to grow; the mammal was delisted in 2004.

I can’t help but hope that someday we’ll have a breeding population of river otters here in Kane County. Like the pileated, this story is still evolving. But I’m pretty this isn’t the last we’ll be hearing about Fox River river otters.

Finally, we have a little gee-whiz anecdote to share. St. Charles Township is home to an albino squirrel. The little guy, or gal, was first spotted last fall. Thanks perhaps in part to our snowy and therefore very white winter, the squirrel is still around, foraging in yards in a neighborhood west of Randall Road.

Black squirrels occur in our area too, not commonly but with more regularity than white ones. This albino was the second one we’ve heard about; the first was reported last September out in Hampshire. It could be there are more, just waiting to be found.

So there you have it. Three great local nature stories, plus a side of squirrel! Time to head out and make your own discoveries to share. Though I’ll warn you… it’ll be hard to choose just one.