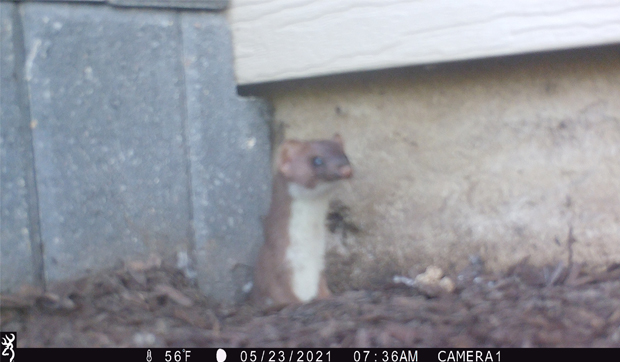 This game camera photo shows ‘Ginny Weasley,’ a long-tailed weasel that took up residence under a porch in Geneva. (Photo courtesy of Veronica and Neal Hancock.)

Here at Good Natured World Headquarters, we get a fair amount of correspondence asking for assistance in “getting rid of ____________.” Over the years that blank has been filled with colorful and sometimes salty language describing the invaders, which range across a wide variety of categories: Insects (namely brown marmorated stink bugs, multicolored Asian lady beetles and box elder bugs); Rodents (mice, chipmunks and squirrels); bats (no explanation needed); and raccoons, opossums and skunks (ditto).

But never, and I mean NEVER, have we ever gotten a call like we did a few weeks ago from our good friend Neal Hancock.

Mr. Hancock and I have known each other for several years, with most of our collaborations involving his students at Wild Rose School in St. Charles. We did have one interaction involving a stray and slightly injured cornsnake-the candy-striped albino you can now see on display at Hickory Knolls–but Stumpy and how she got stomped, and rescued by Neal, is a story for another time.

When he called in late May, Neal was looking for advice on how to relocate an animal that had taken up residence under his home in Geneva. The creature was wily, he said, and downright weasely.

In fact he was pretty sure it was a weasel.

Hearing that conclusion, I naturally had a few questions. Weasels aren’t exactly your typical uninvited guest, especially not in very suburban neighborhoods like Neal’s. I was trying to steer him toward a mink, as we actually do hear about them from time to time, especially in areas where backyard chicken-keeping is popular, or maybe an escaped pet ferret.

But no, Neal was firm in his diagnosis-and he was right! When he texted me a photo from his game camera, there was no denying his tenant was in fact a long-tailed weasel, Mustela frenata.

Long-tailed weasels are the sort of critter I consider unusual for our area-not so much because they are rare, but because their secretive habits make them hard to find. However, they do have one trait that’s difficult to miss: They are killing machines.

“We actually found all sorts of, ah, signs, I guess you’d say,” Neal said during a recent phone conversation. “It just decimated a whole colony of voles in our backyard. Eviscerated animals, innards laying around…we found parts all over the place before we found the actual weasel.”

As avowed animal lovers Neal and his wife Veronica naturally were less than thrilled with the carnage, hence his question about how to find the weasel a new home. Yet setting up a Havahart live trap, catching the creature and transporting it to another area was not only challenging, due to its sly nature, but also a violation of state conservation laws.

The day we first spoke, Neal had me on speaker phone with Veronica in the background. We were reviewing options, which mainly focused on hiring a professional wildlife removal service. I also tried the live-and-let-live approach, pointing out that most people in the area who’ve experienced rodent problems would probably pay to have a weasel move in under their porch.

Then the conversation turned to the possibility of the weasel being female, and perhaps nursing a litter of young. I could be wrong, but I’m pretty sure Veronica made a small sound at the mention of babies. A quiet chat between the two of them ensued and a verdict was issued: The weasel could stay. And in deference to the Harry Potter character, she would be known as Ginny Weasley.

Now here’s where we take a small detour away from the drama under the Hancocks’ porch, and into the bizarre biology of long-tailed weasels. Although in our area they give birth in springtime, mating actually occurs the summer before. These weasels are among a handful of mammals-about 2.5% of species worldwide–that reproduce using delayed implantation. That is, fertilization occurs at the time of mating but the embryos do not begin to grow until much later. Also known as embryonic diapause, the strategy allows for offspring to be born when conditions-namely weather and food supply-are favorable.

The total reproductive timeline adds up to an average gestation period of 280 days…the same as humans. Imagine the fun you could have trotting that fact out at your next cocktail party!

Getting back to Ginny and the Hancocks, their story has, interestingly enough, entered a diapause of its own. A few days after Neal’s first phone call, Ginny stopped showing up on the game camera. That, plus the fact they weren’t finding any new headless remains in the yard, caused Neal and Veronica to surmise that Ginny had moved on.

Did she give birth? Did she relocate her young? Was she even a she? Those and other questions at this point remain unanswered. But the tale could pick up again at a later date.

A phone call with Neal last week revealed that the home next door is in foreclosure and its lawn, as he described, “looks like a wheat field,” with Hungarian brome and other grasses standing at least 2 ft. tall. The unoccupied house is quiet-another plus-and the unkempt yard provides plenty of cover for voles and rabbits. And weasels.

Lots could happen in the future, but I’m pretty sure this story isn’t over yet. We’ll check back in with the Hancocks later on, in, say, about 280 days…