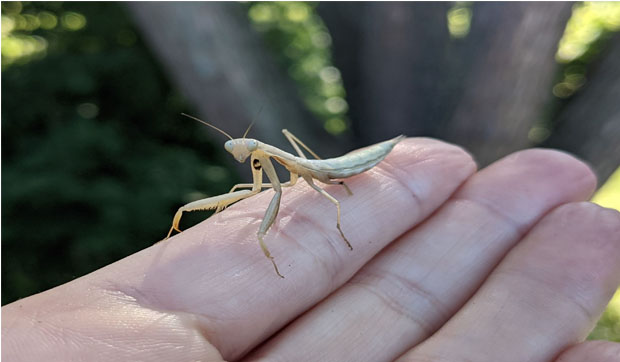 European praying mantises can vary widely in color, from light tan to green, but the ‘bullseye’ on the inner surface of the front leg is a definitive field mark for Mantis religiosa.

I kid you not, every day for the past week I’ve had those lyrics, from the R.E.M. song Losing My Religion, running through my head for–I thought–no apparent reason. But as I stood there in the kitchen the other day, looking yet again for the little praying mantis I’d inherited, I suddenly realized why.

For the fourth time in as many days I’d lost not my religion, but my religiosa-as in Mantis religiosa, the European mantis.

Luckily I found it, this time perched on the pepper grinder. The day before it had been on a dish towel. And on the side of my Chemex carafe before that. Apparently I’m incapable of securely latching the lid on the little creature’s enclosure…and s/he strides out Every Single Time.

My coworker Jill first found the mantis, which right now measures around 2 in., or 2/3rds of the way to its adult size, after working amid the native plants that surround our Hickory Knolls Discovery Center. She texted me to see if I had any interest in the youngster which, she noted, had an unusually light color, and might make a good teaching aid.

To be honest, my gut reaction was no. Keeping a young mantis happy and healthy means procuring soft-bodied insects on a daily basis, and I’ve been down that path many times before. The bugs need to be small enough for the little predator to subdue, but they can’t be too well equipped to fight back. (Learned that lesson several years ago when rearing Manny the Chinese Mantid, who lost one of his raptorial forelegs to a feisty ant. Amazingly enough, he did just fine, grabbing and spearing prey with his remaining limb and living to a ripe old age of eight months.)

The insect prey also needs to be plentiful, so I don’t spend half the day or night hunting them. (Last year’s drought was tough not only on plants but also insects, as I learned when I went out night after night seeking tiny bugs for a tiny lizard in my care.)

Thankfully, this summer has been a good one for warm, humid nights and large emergences of caddisflies-those brown, moth-like insects people call river bugs. So, after a slight hesitation, I told Jill yes and went over to Pottawatomie Park to fetch the deli cup/mantis enclosure she’d placed there.

Opening the lid, I too was struck by the little insect’s pigmentation, which was about the color of oatmeal. But what really caught my eye was the black and white marking on the inside of each front leg. This wasn’t one of the ubiquitous Chinese mantids; it was European-the species some references call the archetype of mantises.

True to its name, the insect held its two front legs up and clasped together as if in prayer. It stood still at first, trying its very best to blend in against the grass Jill had added to the container. But then, as I stared at its exquisite form (minus half of one middle leg-had the prey-er almost become prey?) it performed a move exclusive to its kind: It turned its head around and stared right back at me.

What looks like an extra-long neck is actually an extended thorax that allows a mantis to move its head without moving the rest of its body. This adaptation allows mantids to keep an eye on their prey without having to make large, noticeable movements and potentially scare away a meal.
The European mantis is one of three members of the family Mantidae that can be found in Illinois. Both it and the aforementioned Chinese Tenodera sinensis have long been sold as egg cases as a non-chemical means of controlling garden pests (although the jury is out on their effectiveness, as they kill detrimental and beneficial species alike) and are now widespread throughout the country.

The third species, the Carolina mantis, Stagmomantis Carolina, is our only native species. Illinois Department of Natural Resources education materials describe it as occurring in the southern 2/3rds of the state, but the internet database iNaturalist show several records in Cook and DuPage Counties over the last three years.

The Carolina mantis’s range might be shifting, but here in Kane County we see mainly sinensis and, yes, the occasional religiosa.

Which brings us back to that R.E.M. song. “Losing my religion” is a southern expression for losing one’s temper, and the lyrics of the song describe unrequited love. But I think they can also describe other unsuccessful endeavors.

While I’ve so far managed to keep little M. religiosa well fed, those caddisflies can be infuriatingly hard to catch. I’ve taken to turning the porch light on after dark, then going out just before bedtime with a cup and a postcard to try and catch a dozen bugs amid the glare of the LED bulb.

“That’s me in the (ahem) porch-light
Losing my religion…”

All for the sake of a little religiosa.