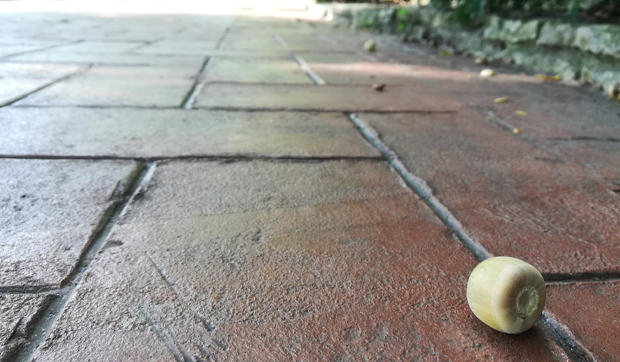 Photo Caption: There’s something missing from landscapes in St. Charles in large areas throughout Kane County: white oak acorns. After two years of high production, our local oaks are taking a break.

Now by this I don’t mean they suddenly switch to making walnuts and hickory nuts, or Fudge Stripes and Deluxe Grahams-despite what the Keebler Elves would have us believe. Rather, it’s the concept that the annual amount of acorns an oak tree produces is neither regular nor constant.

Oh I know the image of a squirrel with an acorn in its little paws is one of our iconic images of autumn. In fact it’s right up there with leaves, corn shocks and cornucopias. But let’s, for just a minute, put aside our notions of harvests and abundance and look at things from the tree’s perspective.

Why does a tree, be it oak, walnut, hickory (but not Keebler) produce that fruit? To ensure the continuation of its species. That’s it, plain and simple.

Except…the odds that an individual fruit will germinate and then survive another 20 to 30 years-the minimum age for an oak to start producing acorns-are actually quite low. Something like 1 in 10,000.

So it would make sense then, wouldn’t it, for a tree to just devote itself to fruit production. Put out as much as possible, year after year, so as to beat those steep odds. Come heck or high water, just keep cranking out fruit and stay one step ahead of those marauding squirrels (and woodchucks, chipmunks, flying squirrels, mice, voles, deer, woodpeckers, blue jays and a host of other herbivores and omnivores).

That certainly seems to have been the game plan the last couple of years here in Kane County. You might recall that in 2017 and 2018 we had back-to-back mast years, that is, bumper crops of forest fruits-in particular, white and bur oak acorns. The trees behind Hickory Knolls were so loaded, you couldn’t help but get bonked in the head when you walked underneath them.

Thanks to that bounty, the woods today are alive with the calls of blue jays (who relish acorns just as much as squirrels do), the trees are quaking with squirrels and the woodland floor is teeming with mice. We’re also seeing teeny little oak seedlings pushing their way up through the vegetation, one or two years into the 20 or 30 they need to make it to maturity.

All seems well, except… (seeing a pattern yet?) such continual fruit production comes at a cost, to both the tree and its wildlife neighbors.

If a tree were to constantly direct nearly all its resources-the water, the minerals it takes up from the soil, the carbohydrates it manufactures during photosynthesis-toward fruit production, it’s not going to be able to fulfill its other important obligation, which is to grow.

Meanwhile, the animals who enjoyed two straight years of plenitude are now facing the consequences of their success. Populations of many woodland creatures are up and they’re competing mightily for available habitat. I’ve seen, and heard, blue jays duking it out in the trees, and in two separate incidents, white-footed mice were squished out in front of Hickory Knolls. If we’ve got that sort of population density in the parking lot, for goodness sake, you can only imagine how many mice are scampering throughout our 130-acre natural area.

Which brings us up to today, and the point of this week’s column. Have you happened to notice what our Kane County white and bur oaks are up to now? I’ll give you a hint: It ain’t fruit production.

The other day I was walking through Pottawatomie Park in St. Charles, drinking in the sights and sounds of a late summer day. It was a picture-perfect sort of afternoon-the sort we dream about when designing park websites and brochures. The sun was shining, a gentle breeze was blowing, and a clean-swept path beckoned ahead.

Except… (see, now I just can’t stop) our Parks crew, hardworking as they are, had not been out with brooms nor leafblowers. They haven’t had to. Because there are hardly any acorns. It’s almost as if the all the white oaks in this area all got together and said, “Alrighty team, enough’s enough. We’re done, for now. Let’s give it a rest.” Kinda like a big pregame pep talk, only in reverse.

This phenomenon of boom or bust repeats itself over the millenia, but not in a way that we humans have yet been able to decipher. That trees are synchronizing their efforts at reproduction (the booms) or at growth (the busts) is well documented, but the reasons are not. Weather patterns and chemical signals (both in the air and in the soil) may both play a role, but many mysteries remain.

We do know that in the coming months, food will be a little harder to come by for all those creatures who’ve recently grown accustomed to the all-you-can-eat acorn buffet. They’re going to have to branch out, so to speak, toward other food sources like red oak acorns, which have more tannins and hence are more bitter, but seem to be in good supply this season. They’ll also likely head for seeds-either those that occur naturally, or those in your birdfeeders, garages and sheds.

Some individuals will not survive. But remember, from the tree’s perspective, that’s not a bad thing. A year, or two or three, of low mast production, will put a drastic cut in the number of acorn-eaters. By then it will be time for another big year, when acorn production will be except…ional.