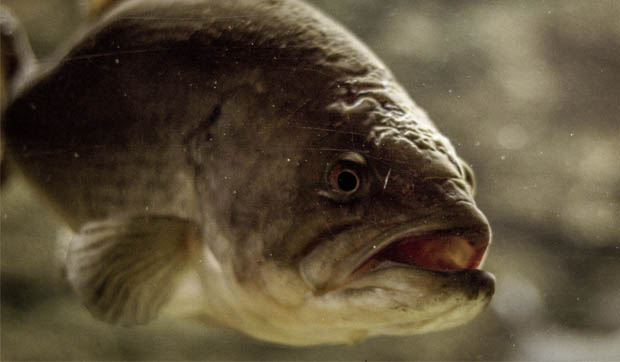 This week, in honor of fathers everywhere, let’s take a look at some of the most devoted papas our area has to offer. A word of warning though, these guys don’t make many people’s lists of warm, huggable favorites. In fact, they’re kinda slimy. But that’s okay, because they’re fish.

Unlike the worlds of birds and mammals, where homemaking duties frequently fall to the female, fish nest building is largely the responsibility of the males. While some rely on aquatic vegetation to provide suitable structure, others simply fan away debris to make way for eggs deposited by visiting females.

Then there are those species that rock and roll. Or, more accurately, roll some rocks. They use their mouths and snouts, and sometimes their tail fins, to roll pebbles and stones around, shaping them into mounds, ridges or saucer-shaped depressions in preparation for spawning.

The names of some of these underwater architects may sound familiar, like smallmouth bass and other members of the sunfish family. These gamefish proliferate throughout the area and exhibit a range of breeding behaviors. Smallies, for example, build their nests within about 150 yards of where the previous year’s spawning occurred. And male bluegills, bless their hearts, not only build their nests in colonies but also grunt to attract a female.

The names of our local nongame fish species might be a little more obscure, but their behaviors are just as intriguing as their better-known brothers. Central stonerollers, for example, are small fish with big lips that never fail to remind me of one Mick Jagger. That these males spend the breeding season rolling stones just kinda seals the deal. After their nests are built, the males guard them fiercely, even chasing rivals out of the water as they seek to defend their turf in the freshwater surf.

While you’d think that the male that does the nestbuilding would be the guy who gets the girl, so to speak, that’s not always the case. In the case of bluegills and certain other species, aptly named satellite and sneaker males add intrigue by freeloading off the efforts of nestbuilding males. Satellites develop the coloration of a female and are hence allowed to remain in close proximity to a nest; when an actual female swims in, the satellite male joins her and attempts fertilization of her eggs. Sneakers, by contrast, are young males that swoop in at the last second and make an effort to hijack the reproductive proceeding. Not exactly father-of-the-year behavior, but they get the job done.

Interestingly, for many of our local fish species, it’s mama who’s the rolling stone. Females stay only long enough to deposit some eggs; in many species, they then swim off to visit the nests of other expectant males. (Largemouth bass are a notable exception; research indicates that many members of this species are monogamous, at least for a season.)

In some species, papa leaves too, leaving the eggs and fry to fare for themselves. But for many others, males will stick around, protecting their progeny day and night from all manner of threats. With fish eggs and fry ranking high on the list of virtually every other predator in the stream, even a quick trip away for sustenance could result in the loss of the entire brood. What’s a poor father to do?

Why, eat a few of the kids of course. As much as we’d like to apply human values like commitment and devotion to the male’s conduct, in the end it’s survival that’s the name of the game. And after all, protein is protein. An egg here, a fry there-he’ll eat just enough to get by, while simultaneously ensuring the success of a majority of his offspring.

With all the rain we’ve had this spring, it’s hard to see all the paternal activity that’s taking place on at the bottom of our creeks and Fox River. But, trust me, it’s there. And come July and August, when water levels will surely have receded, you’ll still be able to admire the fishes’ formations.

Make a note now to head this summer to a local stream that supports a diversity of fish species. A personal favorite is Ferson Creek at LeRoy Oakes Forest Preserve. Although the streambed has a fair amount of silt in it these days, which isn’t great for the overall health of the creek’s ecosystem, the coating of fine particles does make it way easier to spot the creations of dedicated fish fathers.

Look for unusually clean bits of gravel arranged in circular fashion, in diameters that range from a few inches to a foot or more across. Admire the conical mounds and round wells and remember that father knows best, at least when it comes to building fish nests.