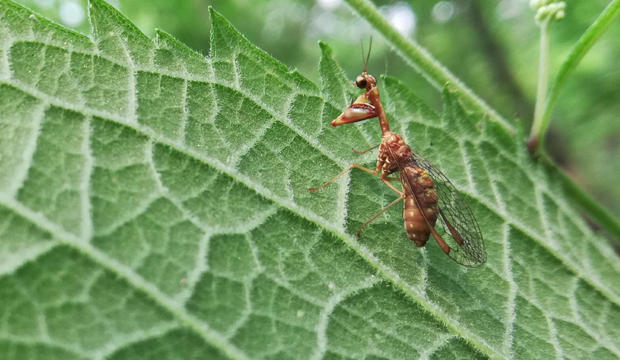 So the other day I went to Delnor Woods Park in St. Charles to take some photos of Joe Pye weed, a favorite summertime bloom. Its tall stems top 6 feet when conditions are good, and its pastel blooms always remind me of fireworks-quiet, gentle fireworks that last for weeks. What could be better?

Thanks to some recent rain, conditions had indeed been favorable; it didn’t take me long to find a purplish firework about ready to pop. What luck! I lined up the shot, gave thanks for the still air, and subsequently still plants, and prepared to snap away. Ah, but such a photo was not meant to be.

As I looked at the elements in the frame, I saw the flower, its stem and what I at first thought was a bit of schmutz on one of the leaves. But as I moved it to brush it away, the schmutz-I kid you not-turned around and looked at me.

As we stood there contemplating one another, the schmutz and I, a faint bell of recognition began to ding in my head. This brown tad of life-insect life, it turned out–was something I’d read about, and seen pictures of, but never dreamed I’d ever encounter. I adjusted my gaze; the wee critter did likewise. I moved closer; it pivoted to keep me in its view.

I snapped a few quick pictures, in case it decided to fly away, but I needn’t have worried. This mantidfly wasn’t going to budge and consequently neither was I.

Mantidflies, also sometimes called mantisflies, are named for their strong resemblance to praying mantids and to flies. But just as lightning bugs are neither sparks of electricity (their light is chemical) nor true bugs (they’re beetles), mantidflies are not closely related to either of their namesakes.

Rather, they’re cousins to another type of insect with which you’re likely familiar: the lacewings. Green lacewings in particular are common in our area. The delicate green bodies of the adults belie their predatory origins; lacewing larvae, with their large mandibles, are important predators of aphids, thrips and other juicy morsels on our plants.

But while green lacewings may or may not remain insectivorous as adults (some switch to pollen and nectar) mantidflies continue their meat-eating ways throughout their lives.

Mantidflies in the subfamily Mantispinae start out life as tiny larvae with one mission: Get themselves inside a spider egg sac. Depending on species, some will seek out the egg sac itself while others seek out the spiders that make them.

Either way, it’s a tough proposition. Spider eggs sacs, while fairly plentiful in the summertime woods, aren’t always conveniently located. Plus, mantidfly larvae adhere to a strict rule of one larva per egg sac. You snooze, little larvae, and you lose.

For those larvae that opt instead for the spider route, they first have to make their way to a breeding female. If perchance they instead find a male, they’ll need to transfer to his lady friend during mating, then climb inside her silken egg sac as she’s spinning it.

Once safely inside a sac, the larval mantidfly can proceed through its next few phases with little interruption. It’s basically feed, grow, molt, then feed, grow and molt again before pupating and finishing its development.

When it’s time to emerge, the young adult mantidfly will use its impressive mandibles to chew its way out of the egg sac and move along to its next life stage, a period that involves more feeding, and finding a mate.

It was at this point in its life that I encountered the Delnor Woods mantidfly. As we eyed each other I tried as best I could to absorb every detail of the magnificent creature before me: its enormous eyes, its intricately veined wings, its raptorial forelegs that look just like the ones on a praying mantis.

Unfazed-or maybe wishing to display its might-the inch-long insect stretched one of those forelegs, then returned it to its flexed “praying,” or preying, position. Its antennae twitched, likely trying to interpret the chemical signals from the indiscreet mammal that was standing way too close. I snapped a few more photos, as well as a short video, during which the wee beast stretched again.

We could have continued our mutual inspections of each other for the rest of the afternoon, but for the fact that I had a meeting and a half dozen other tasks on my to-do list. I’m sure my new little buddy had better things to do too. So it was that I reluctantly left the mantidfly on its Joe Pye leaf, with the hope that we would one day meet again.

Spoiler alert: We didn’t. But I did go back to Delnor Woods a few days later to photograph the Joe Pye in all its glory. We’ll explore its ecology next week…unless another cool critter comes along…