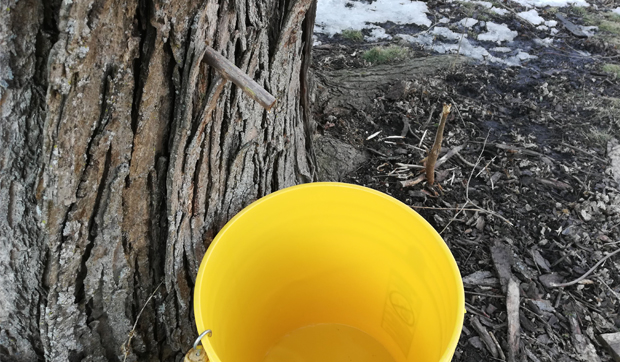 Maple syrup anyone? Our recent warm days and cool nights provided perfect conditions for the 2021 sap run in northern Illinois.

So here we are in March of 2021, marking the one-year anniversary since COVID-19 changed our lives. Over the past 12 months I’d wager many of us dusted off skills we might have forgotten we had. How many times did you try making lemonade out of lemons, or the immeasurably more difficult chicken salad from chicken, uh, droppings?

Last week, as the temperatures gave us that magical combination of above freezing during the day and at or below freezing at night, I knew it was my turn to make our not-great situation seem a little bit brighter. I grabbed a few tools, headed outside and endeavored to make pancake deliciousness out of pandemic downtime. Or, put another way, maple syrup out of maple sap.

Now the last time I trotted out my maple-tapping know-how was 2007, when I worked at Red Oak Nature Center in North Aurora. Back then, the ides of March were the date around which our entire programming year revolved. MapleFest, then held on the Saturday closest to the middle of March, saw hundreds of people flocking to the Red Oak grounds to witness the magic of poking a hole in a tree, hanging a bucket, collecting the sap and boiling it down to make syrup.

I can still remember the rituals of the season, which besides MapleFest included about four weeks of teaching school kids about the process, as well as what’s going on inside the tree that makes it possible. (In a nutshell, the warmer days and still-cool nights of late winter create pressure changes within the tree that cause the sap to move. Its ultimate purpose is to fuel the growth of this year’s leaves. And no, the loss of a few gallons of sap will not harm a healthy tree.)

Armed with a brace (a.k.a. hand drill) and 7/16-in. bit, a spile (the “spigot”), a hammer and a bucket with a lid, off we’d troop to a nearby maple tree to capture the watery goodness.

We’d drill a hole at a slightly downward angle, then gently tap the spile into the tree. It was always the naturalists’ job to hold the spiles while the program participants tried their hand at tapping with the hammer-a task that 99 times out of 100 proceeded without incident. But then would come that 100th time…

None of us never sustained serious injury. However a number of close calls led to, as my friend and former co-naturalist Miss Bonnie reminded me just the other day, a phrase that became standard for every group: “Now remember, it’s maple tapping, not maple whacking…”

Lugging the buckets of sap to the fire, stoking the wood stove, filling stainless steel sap-boiling pans, watching the steam rise as the excess water bubbled away…these are memories ingrained in my brain.

So I suppose it’s only natural that, after a 14-year absence, maple tapping is back in my life.

I’d thought about doing it in years past but beyond conjuring up some fond memories I never took any action. The excuse I gave myself was that I didn’t have the proper equipment-specifically the spile.

But then a couple weeks ago, trimming back the elderberry bushes in my backyard, I realized I was holding the solution in my hand: Elderberry canes! The pith that runs through the center of these thin branches is soft and easily removed, leaving sturdy tube that can be whittled to the appropriate size.

In just under 30 minutes, including the time it took to track down my Xacto blades, I’d fashioned an elderberry spile and in just 15 minutes more the silver maple in my backyard was tapped. A food-grade bucket collected the drip, drip, drip of watery goodness, and within 48 hours of sinking that homemade spile I was feasting on homemade syrup poured over pancakes and sausage.

Now if you’re paying attention you might at this point be thinking, “Wait a minute Miss Pam…You tapped a silver maple, not a sugar maple!”

You know what? It’s okay. Silver maples produce sugary sap too. As do black maples, red maples, Norway maples and even box elders, which actually are maples too. In fact, you can tap walnut trees, birch trees, basswood trees and several others. Each species has a unique flavor, as well as a different percentage of water in the sap.

Sugar maples are great because of their high sugar-to-water ratio. It takes only about 40 gallons of sap (picture a bathtub-ful) to make a gallon of sugar maple syrup. Silver maple sap is more watery, so you need to gather more and boil it longer to evaporate the excess liquid. But it’s just as delicious! (Fun fact: The scientific name for sugar maple is Acer saccharum, while silver maple’s binomial is A. saccharinum. Both species names are derived from the Latin word for sugar.)

You might also have noticed that maple sugaring season now occurs roughly two weeks earlier than it did in the early 2000s. Yes, our climate is shifting. But the fun remains the same. While it might be too late to fashion an elderberry tree and tap a tree this year, the next maple-tapping season is just over 11 months away-a time span that is, literally, a drop in the bucket.