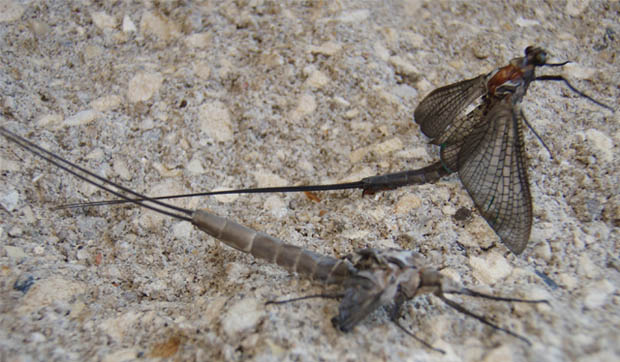 An Ephemeridae mayfly rests next to its freshly cast skin. Mayflies are the only insects that experience a subimago, or sub adult, life stage in which they are winged and capable of flight but not fully mature.

(Ed. Note: This column is the second in a three-part series on the Fox River’s famous, or perhaps infamous, ‘River Bugs.’)

For many folks, the daily routine is more like a mad dash from start to finish. Wake up, make the coffee, eat breakfast, get dressed, then hit the ground running – off to the office, the grocery store, the gym; phone calls, meetings, housework, errands, appointments. It’s a wonder how we get everything done, huh?

Well, if you think you’ve got it rough, consider the life of the mayfly.

In one short, 24-hour burst (or 48 or 72 hours, depending on species and fat stores) mayflies need to emerge from the underwater habitat where they spent their youth, shed their exoskeleton, fly a short distance, avoid predators, shed again, join a mating swarm, fly some more, avoid more predators, find a mate and create the next generation.

No time for wine and candlelight, no sirree. Mating occurs on the fly, literally, and then females head back down to the water to deposit their eggs, either by flying just above the surface or by dipping their abdomen into the water here and there until the supply is exhausted.

It’s a jam-packed agenda, for sure, with one very noticeable item missing. At no time during their adult phase do mayflies have to stop and feed. In fact, they couldn’t even if they wanted to. Having done all their eating as aquatic nymphs, adult mayflies lack functional mouthparts.

And so it is that, even under the best conditions, the final item on the mayfly’s to-do list is short and sweet: Die.

So famously fleeting is this insect’s adult life that its entire order, Ephemeroptera, reflects its brevity.

Can you say ephemeral?

I suppose it’s our nature to focus on this one brief part of the mayfly lifecycle. After all, the majority of our own lifespans is spent in adulthood. But for mayflies, as is the case for most insects, it’s the juvenile, or nymph, stage that lasts the longest.

In our area, mayflies spend one to two years in this phase, living at the bottom of well-oxygenated streams and feeding on plant material or other small organisms. Again, as is true for other insects, the nymphs progress through several immature stages known as instars.

Although there is considerable variation between the different kinds of mayflies (611 species in 59 genera and 21 families in North America alone) all share some common traits. They have three, or sometimes two, caudal filaments-“tails”-protruding from their hind end. They breathe through gills located along either side of the abdomen. And because they are relatively intolerant of pollution, they make excellent indicators of water quality.

In short, mayfly nymphs are pretty darn cool. But what really distinguishes this insect from all others is what happens next.

When the time comes to leave the water, mayflies don’t just molt one last time and fly away. Nope, not these guys. They are the only insect order with a sub-adult, or subimago, life stage into their maturation process.

As fly fishermen, many of whom are wonderful aquatic entomologists, will tell you, the subimagos, or duns, have wings and can fly, but they are not yet fully mature adults. Only after a period of anywhere from hours to days (but typically overnight) does the insect molt one more time-wings and all-to emerge as an imago, or adult (spinner in fly fisher-speak).

Like the caddisflies we explored last week, mayflies undergo what’s called synchronized hatching. All the mayfly nymphs of a particular species develop at about the same rate and emerge at about the same time. Mass emerging means mass mating, and an assurance that the cycle will perpetuate year after year.

Any day now we’ll be experiencing one of these synchronized emergences.  In years past, right around July 1 at Pottawatomie Park in St. Charles we’ve seen a hatch of a species I believe belongs to the Ephemeridae. This family, also known as the burrowing mayflies, have nymphs with legs that are adapted for digging in sand and silt-something that’s present in abundance along that particular stretch of the Fox River.

As adult mayflies go, these individuals are large, over an inch in length, not including their two long, trailing tails. Unlike the caddisflies and other insects that emerge from the Fox River and make a small splat on your windshield, these River Bugs make the sort of splatter that requires washer fluid and several swipes with the wipers.

Although most humans (fly fisherpersons excepted) may not be too excited about the mayfly hatch, our local fauna probably are tickled pink – especially insect-eating birds such as swallows, swifts and purple martins. Look for them to be out in force too this soon too, snapping up the bounty that all too quickly will be gone.

Next Week: The Stoneflies