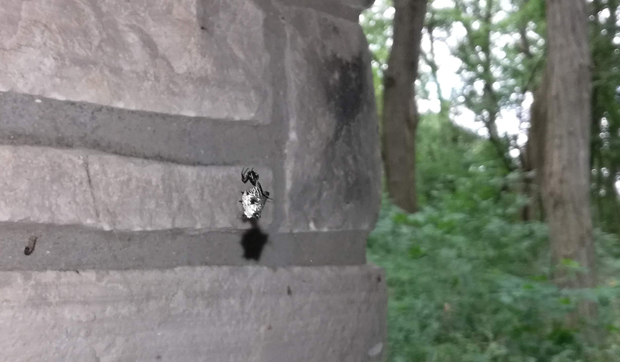 Micrathena gracilis typically spins its orb web across woodland paths at a height that more often than not corresponds to that of a human face. This particular spider, however, chose to anchor her web next to the fireplace in the picnic pavilion at Red Oak Nature Center in North Aurora.

When was the last time you got a face-ful of spider web?

If you live in northern Illinois, and have walked outside recently, particularly in the early morning, I’d imagine you could measure that interval in hours or maybe even minutes. As I’ve said before, fall is spider season and the right now these crafty weavers are everywhere.

As we continue our occasional series on Araneae, or the true spiders, I’d like to introduce you to a personal favorite-one that I’ve come face-to-face with many times. Say hello to little Micrathena gracilis or, as I like to call them, the spiny butts.

Adorned with five pairs of pointy projections, also known as tubercles, sticking out from her backside, the female spined micrathena looks pretty ominous-until you stop to consider that she–the larger of the two genders–measures under 1/2 inch in length. Sure, with legs thrown in she *might* stretch out to 3/4 inch or so but, still, as spiders go this species does not grow to a particularly threatening size.

And those spines? I couldn’t find a definitive source that states that the spines are there specifically to ______ (fill in the blank) but I did come across the writings of a few other nature nerds like myself who conjectured and supposed that the adornments make the spider look less palatable and therefore less likely to get eaten. (I can just imagine the sign at the Migratory Bird Cafe… Today’s Special: Micrathena *Eat at Your Own Risk.)

While the female gracilis anatomy always includes those 10 spiny tubercles, the rest of her look is somewhat variable. She might be black and white, or brown and yellow; her abdomen may be dark colored with light spots, or light colored with dark spots.

And the males? They look nothing like their mates. Quite small-less than 1/4 inch in length-they have a whitish and spine-free abdomen that is flattened and elongated. Well, as elongated as it can be and measure 0.18 inches.

Getting back to the female, her underside, or ventral side, usually is dark and always is cone shaped. In fact, it reminds me of the stylus on my groovy 1970s-vintage turntable. At the tip lie the spider’s spinnerets, important organs on which her survival relies.

Every morning around dawn Ms. Micrathena sets about spinning a brand new, delicate orb web made of very fine silk filaments placed close together. The iridescent strands glint in the filtered sunlight typical of her woodland habitat and, I kid you not, look a lot like a compact disc-which makes the abdomen’s resemblance to a record needle somewhat ironic, doesn’t it?

The web is suspended somewhere between 4 and 7 ft. from the ground, a distance that also can be interpreted as “face height” (as many morning woods-walkers will attest).

Provided nothing other than insects crashes into the web, the female Micrathena will spend her day suspended near the center, relying on her dappled coloration for camouflage. But then, as dusk nears, she launches into clean-up mode, gobbling up those protein-packed silk strands. She leaves only a few straight pieces of outer framework, and retreats to an edge where she spends the night. The next morning at dawn she begins anew, spinning silk and waiting for more insects or faces to happen by.

Even if you’re not a fan of spiders, you have to admire the female Micrathena’s work ethic. And if that’s still not enough to sway you, surely you can take pleasure in knowing that her CD-esque web is finely detailed for a reason: Her main prey is little Diptera, as in mosquitoes.

This small marvel’s awesome web-spinning skills also are responsible for its genus name. Micrathena is a combination of two Greek words-micro, for small, and Athena, the goddess of war but also other things, including arts and crafts and particularly spinning and weaving. (Mythology fun: Arachne was another talented weaver who challenged Athena; the myth has many variations but all of them end with Arachne being turned into a spider.)

(Bonus fun: Arachne, clearly is where the taxonomic group Arachnida got its name. But while all spiders are arachnids not all arachnids are spiders. The class also includes scorpions and other eight-legged wonders, including daddy longlegs a.k.a. harvestmen which, believe it or not, are not spiders.)

M. gracilis occasionally pops up in neighborhoods, especially those near wooded areas, but its preferred habitat is woodlands with understory shrubs that will support its webs. With that said, females are pretty mobile and will move around quite a bit in August in September, choosing a new web site (not the WWW kind) every week or so.

It’s not often that you have the opportunity to come face to face with a representation of a genuine Greek goddess. But now is the time… Keep your eyes open when you’re out and about; you might be lucky enough to run into a magnificent Micro Athena.