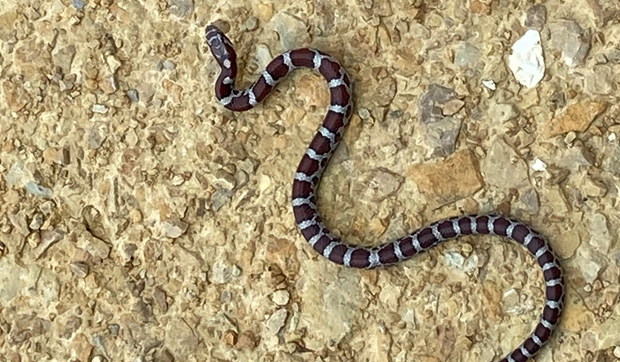 Judy Hayes of Chana, IL, recently found this visitor on her driveway. Eastern milksnakes get their name from the mistaken notion that they feed on milk; their actual diet includes rodents and other snakes.

The woman’s voice quavered as she described her predicament.

“I have a milkshake on my driveway,” she squeaked over the phone, her words barely discernible above the squeals emanating from her equally agitated children.

I winced as I listened, thinking back to the time I’d watched a Superdawg chocolate shake meet a similar fate on a sidewalk in Park Ridge. But before I could commiserate, or ask why the woman was calling a nature center to share her misfortune, she continued with her story.

“It’s been there for almost an hour. I was thinking I’d put it in a fruit jar and bring it to you, but that’s when I thought I’d better call and ask if that’s the right thing to do.”

Remembering my own dairy debacle, I knew the last thing I wanted to do was save the sad remains in a jar, let alone bring them somewhere.

Utterly confused, I was about to suggest the woman just hose away the whole mess. But then she spoke again and the details of her dilemma emerged.

“I don’t want it to bite me. And, it’s so little. I’m wondering if it just hatched, and whether there are more around.”

Bing! A light bulb went on. The caller wasn’t describing a milkshake, as in sweet elixir, but rather a milksnake, as in Lampropeltis triangulum triangulum – one of our area’s most colorful, and secretive, snakes.

Decked out in a vibrant mix of black, scarlet or brick red, and creamy white, the eastern milk snake looks anything but native. Its bold blotches seem far too flamboyant to be included among our region’s herpetofauna, which typically bear more conservative hues of green, black and brown.

A recent email from Judy Hayes in rural Chana, IL, underscores these differences. In her request for snake identification, she included two photos and wrote, “This morning I had a snake in my driveway.  It was about a foot long. Not big. I am wondering if you could identify it for me. Or tell me where to get it identified. About the only snake I have seen in my yard is garter snakes. Definitely not that!”

I’m pleased to report that after learning her visitor was a milksnake, Judy said she was glad to have the it around, but added that she had yet to see it again. That sort of now-you-see-it, now-you-don’t behavior is par for the milksnake course.

These shiny, multihued members of Class Reptilia are fossorial in nature, which means they spend a lot of time underground. They love hiding beneath rocks and debris, and frequently overtake burrows of critters like ground squirrels and woodchucks. Unless you catch them basking (on, like, say, a driveway) you really have to be looking for them to find them.

The common name milksnake comes from the animal’s habit of hanging out around farms, where it was once rumored to drink the milk of farmers’ cows. That folklore resulted in the snake’s common name, but completely obscured its most helpful trait. Milksnakes are constrictors that feed primarily on mice and other rodents, but also are not opposed to snacking on another snake should the opportunity present itself.

As agricultural practices have changed, and small family farms have dropped from the landscape, so, too, have milksnakes–at least here in Kane County. They’re still around, but harder to find.

Milksnakes also are prized by collectors. If and when they do appear, they often are snapped up and either sold or kept as pets.  This ill-advised, and illegal, practice has hit wild populations hard, especially since the species was never present in great numbers to begin with.

If you’d like to see a living, breathing eastern milksnake but don’t want to go to the trouble of turning over rocks or reaching down burrows-or cruising past driveways in rural areas-I’ve got good news! We have one on display at Hickory Knolls.

Bred in captivity and donated by a local herpetologist, Mary Milksnake has resided at the nature center since 2011. In fact a year later our milksnake collection doubled in size when Mary was joined by a second, but very different member of her species. Oscar is a Pueblan, or Campbell’s (Lampropeltis triangulum campbelli) milksnake who had the misfortune of getting tossed in a trash can but then happily was rescued and brought to our door.

Our friendly and helpful staff would be glad to introduce you to either one of them.  All you have to do is come to the front desk and say you’d like to see the milksnakes. Within minutes your wish will be granted. Unless of course we start to give you directions to Colonial. Or Dairy Queen. Or Oberweis…