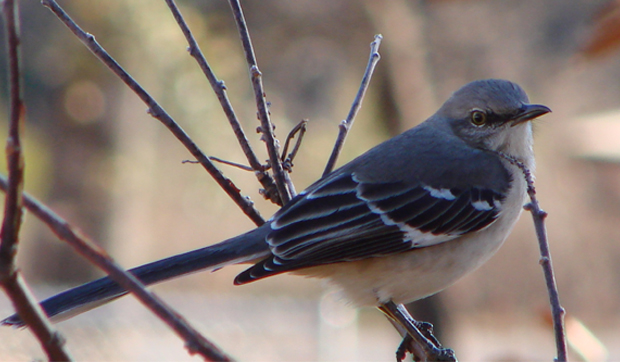 Maybe all this social distancing is starting to get to me. Or maybe I watched too much TV as a kid. But do you know what show has been on my mind these past few weeks?

I know, weird, huh? It’s not like Herman, Lily and the gang are enjoying any sort of resurgence in popularity. And to be honest, I was never that big a fan anyway, with my taste in humor running more toward Uncle Fester and The Addams Family.

The reason I’ve been thinking about Grandpa, Eddie and poor cousin Marilyn, et al, actually has more to do with their address: 1313 Mockingbird Lane in Mockingbird Heights, CA. Because, believe it or not, over the past few weeks St. Charles has acquired a mockingbird neighborhood of its own!

This nature adventure began on Thursday March 12, as I was walking to work. A ton-yes, that is an official scientific term I just made up-of robins had descended on the lawns at and around Davis School. I was counting and playing my usual One of These Things (Is Not Like the Others) game, not really expecting any results, when… Whoa! One of those robins didn’t look quite right.

The bird’s profile was slimmer and its posture was more upright; and rather than foraging on the ground, it was watching the action from up on a utility line. Its tail looked longer by a skosh (another scientific term) and it angled up and out instead of down.

I slowed my ambling pace down to a crawl, then a dead stop. The robins couldn’t care less, but the bird on the wire eyed me suspiciously, giving me pretty much the same look I was giving it. Then it flew, and I got the a-ha moment I, with my myopic vision, had been hoping for: big white patches on both wings!

Now, there are only two birds I can think of I this area that are that size and have bold white on the wings, and neither is common. One is the red-headed woodpecker, which this bird most certainly was not. The other is…wait for it…the northern mockingbird!

Mimus polyglottos-the “many-tongued mimic” is listed as rare on Kane County Audubon’s Birds of Kane County Checklist. But the species is also starred, indicating that it might possibly breed in the area. I pondered these details as I resumed my walk, and vowed to keep an eye out for the bird in the coming days.

The next day was March 13, a Friday. You might recall, it was also the day that announcements of school closures and program cancellations due to COVID-19 began. The mockingbird, however, was delightfully unaffected by this news and showed up, once again, on the utility lines and a nearby fence.

On March 16, with Davis School closed to students, M. polyglottos had a literal field day in the distinctly quieter neighborhood, and by Thursday the 18th was displaying many of the characteristics the species for which the species is known. I watched as the bird chased several robins away from its foraging area on the ground, and again when a few dared sample crabapples in a parkway tree. I listened as the bird, which I assume to be male, as they’re usually ones to arrive first, performed a few riffs of other birds’ songs. Let me tell you, he was impressive!

He started off with a few renditions of the northern cardinal’s song, a hearty “birdie, birdie, birdie.” He continued with some rounds of the robins’ “cheery-up, cheerio” song. Then he muttered something else I didn’t quite catch before taking off and disappearing into a tall conifer midway down the block.

As of Friday, March 27 the bird was still in the area. Does that mean it’s here to stay? I’m not quite sure.

Those behaviors it is displaying-the singing, the chasing-would certainly seem like it was setting up and defending a breeding territory. But mockingbirds are one of those species that is chatty and defensive all year round, not just during the breeding season.

Another factor that will likely determine its longevity in the area is whether a Mrs. Mockingbird comes along. I could be mistaken, but since I’ve so far only seen one bird at a time, I’m thinking there’s only one individual here. And that does not seem like the best strategy for perpetuating the species.

Time of course will tell. And that’s one commodity we have plenty of these days! If you’re looking for an activity that will allow for some exercise (as the bird is pretty mobile) as well as the right amount of social distancing, head on over to Mockingbird Lane, er, Seventh Street, where it intersects with Horne in St. Charles.

Be patient as you wait for the bird to show, and use your ears as well as your eyes. This bird is bold and boisterous and, I guarantee, every bit as entertaining as binge-watching episodes of The Munsters.

Pam Otto is the outreach ambassador for the St. Charles Park District. Her office remains closed but you can leave her a voicemail at 630-513-4346 or an email at potto@stcparks.org.