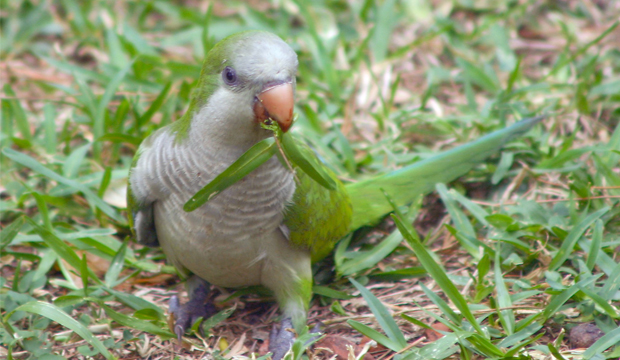 Native to South America but naturalized in many parts of the world, monk parakeets can be seen flying about their communal nests in many locations throughout the Chicago area-including Lombard.

A little over a year ago, in February 2020, I signed up for what promised to be the adventure of a lifetime.

“Travel to Costa Rica,” the brochure said, “where it’s easier to be at one with nature than anywhere else in the world.” They had me at “nature,” but I kept reading anyway. “Imagine gazing at the fluttering brilliance of a Blue Morpho Butterfly … stumbling upon a Three-toed Sloth napping in the forest canopy … cocking your head to return the inquisitive look of a giant Green Iguana … spotting a Resplendent Quetzal gliding through the trees…”

All right already, I’m in! I glanced briefly through the online documents, paid for the trip in full and started counting the days til our February 2021 departure date.

But then along came a little thing called COVID. As the weeks morphed into months, February 2021 drawing ever closer, the likelihood of actually going on the trip became more and more remote. Toward the end of 2020 we received word that the trip officially was cancelled, er, postponed, and in January my friends and I chose new travel dates in 2022.

The visions of butterflies and sloths and iguanas and quetzals that have been dancing in my head for months now need to continue for nearly another year before they become reality. To compound matters, I’d started reading up on the birds of Costa Rica-specifically the parrots-so now my dreams also are filled with the chatter of crimson-fronted parakeets, white-crowned parrots and the squawks of scarlet macaws. (Actually, those latter sounds might have real. King Tom, my blue-and-gold macaw, never holds back when the squawking mood strikes him. And it strikes pretty often. Just ask the neighbors…)

Then last week’s warm and humid weather hit, and I got to thinking, wouldn’t it be great to be able to see some parrots in the wild right now? So I did what any Psittacine-craving, west-suburban resident would do. I packed up my camera, jumped in the car and headed to Lombard.

If you’ve ever driven along Swift Road between St. Charles Rd. and North Ave./Route 64, you probably know where this story is going. Commonwealth Edison maintains a large substation right where the Great Western Trail crosses Swift, and attached to many of the structures within that complex are what look like mounds of dead grass-the nests of Myiopsitta monachus, the Quaker or monk parakeet.

I’d heard about these birds years ago when I belonged to the Greater Chicago Caged Bird Club. ComEd would consult with the club whenever it looked like a nest removal was going to happen, and members would volunteer to help take care of any young birds that might get displaced.

It was at a club meeting that I learned that these birds, native to Argentina and neighboring countries in South America, escaped from the pet trade in the 1960s and began forming colonies in various parts of the United States, including Chicago. They were somewhat famous residents in Hyde Park in the 1970s and ’80s, then-like many Chicagoans-began dispersing into the suburbs.

Arriving at the Lombard site, I parked in the small gravel lot on the east side of Swift. Not sure of which direction to head, I looked up and-lo and behold-a monk parakeet flew by, heading west. I watched as it disappeared into the jumble of pipes and beams and insulators that make up the substation, and which double as stand-ins for the forests of these birds’ ancestral homelands.

Monk parakeets possess many unusual traits, not the least of which is their ability to adapt to a range of climates in their adopted continent. They’re omnivorous, feeding on insects as well as a variety of plant-based foods. Their well-developed brains lead them to excel at problem solving. And, being parrots, they’re excellent mimics.

But there’s one area where monk parakeets are truly outstanding in their field: They are the only parrots in the world that are not cavity nesters.

I remember reading about this behavior in Homing Instinct, naturalist Bernd Heinrich’s most excellent exploration of migration. Monk parakeets, he explains, are closely related to cliff parakeets (M. luchsi), which as their name implies live in cavities in cliffs. Over time, these birds have realized the benefits of having conspecifics close by.

I couldn’t help but smile as I watched the birds flitting among the girders. Some had sprigs of plant material in their mouths; others appeared to have more of a supervisory role. But all were actively partaking of the warm air and abundant sunshine. And so was I.

It might not have been Costa Rica, and they certainly weren’t macaws. But the Lombard monk parakeets are, for now, a much more attainable way to satisfy a parrot itch. They’re definitely worth the trip!