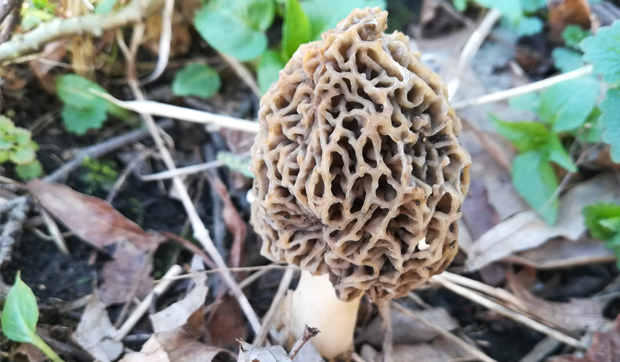 I hate to say this, but if you’re reading this column because you hope to find out about our area’s morel mushroom hotspots…you’re going to be disappointed. If you’re looking to learn some great mushroom-hunting tips….ehhh, sorry, not able to help you there either.

But if you’d like a little reminder that you can find neat things in places you least expect them; that persistence brings reward; and that there’s a little bit of good in every day… Well then my friend, this is a column for you.

I’ll start by admitting, I’m not what I’d call a true mushroom hunter. I don’t have a special mesh bag, I don’t have a cool knife with a mushroom brush on one end, and I don’t carry a hiking stick capped with a carved morel. But I do enjoy looking for the few edible species I can reliably identify: hen of the woods, chicken of the woods and giant puffballs in fall, and in spring, the piece de resistance of the fungus world, the morel.

Apparently the mostly cool, mostly damp sort of spring we’ve had created just the sort of conditions that favor Morchella species. They started popping up about two weeks ago and were followed shortly thereafter by people looking for them.

Now I don’t know whether it’s because these days we have a lot of folks with time on their hands, or because we have a lot of morels, but for whatever reason our local woods are literally crawling with mushroom hunters.

(I could digress into the legalities of mushroom gathering, given that it’s against regulations to collect any kind of animal or plant–including mushrooms, which are neither-on most public lands, with the notable exception of Illinois state parks. But since I’m not a law enforcement officer, we’ll just leave that little tidbit out there as an FYI.)

I’ve also been receiving all sorts of texts and emails from people sending pictures of their incredible finds. Yellow morels! Black morels! Half-free morels! After about the 25th text on the subject, it became clear: I had to find some morels, and I had to find them NOW.

I headed out on a sunny, clear day, pumped up and ready for victory. I’d primed my eyes ahead of time by looking at photos of morels, so I’d be more likely to pick out their conical, pitted caps amid the spring detritus in the woods. I wore a jacket with spacious pockets, so the delicate morsels wouldn’t get squished or bruised.

But once I actually started looking, I got the distinct impression I was going to get skunked.

Oh I found lots of things, for sure. Broken walnut shells faked me out, as did skeletonized leaves. I got distracted for a while by the liquid notes of a Baltimore oriole, and the furtive movements of a pair of wood ducks foraging amid the trees. (For morels? I didn’t ask.)  I came upon a log rife with pheasant back, also known as Dryad’s saddle, a polypore that’s also edible in its early stages. I briefly considered picking one, as I’ve heard they’re not awful, especially when sauteed in butter and garlic.

But no. Morels were the goal, and if I couldn’t find any, I would spite myself with no mushrooms at all.

Which is exactly what I ended up with two hours later. I wanted to spend more time looking, but duty called. It was time to go do yardwork at my mom’s house. Morels, it seemed, would have to wait.

The traffic on the drive to Wheaton was light (thank you, stay at home orders) but, darn it, every woodland I passed along the way looked as though it could be perfect morel habitat. I fought the urge to park the car and resume hunting, promising myself that if I got my chores done I could go out again tomorrow.

Still, the specter of morels haunted me.

I was still feeling a bit defeated as I rolled Mom’s old Toro out of the garage. I expected my usual battle with the balky motor but, surprisingly enough, it started on the first pull. Then, after mowing, I trimmed some dead branches out of an ornamental shrub in the front yard. Not only did I not cut myself like I so often do when working with sharp tools, but I found a really cool ant colony in the hollow core of one of the branches.

Hmm, maybe my luck was starting to change.

I had one more job to do, and just enough daylight to do it. Weeding the fern garden isn’t my favorite job, but what’s nice is it’s the sort of work where I can let my mind wander. Which it did to, you guessed it, morels.

I was trying to decide whether I would cook my future finds in regular butter, or pop for a package of the fancy Kerry Gold, when I caught a glimpse of something that wasn’t a weed, or a fern. In fact, it wasn’t a plant at all. Right there in the backyard of my childhood, beneath the crabapple tree I brought home on Arbor Day 1970, sat not one but TWO MOREL MUSHROOMS.

I could barely contain my glee as I plucked them from the ground. I brushed the dirt off them and got my old Frisbee out of the shed to use as a sort of altar for this miraculous find. I showed my mom (“You’re not going to eat THAT, are you?”) and her housekeeper (“Blech! Aren’t you afraid they will kill you??) and then, satisfied I wouldn’t have to share, placed them carefully in the back of my car.

As I drove home that night, thinking of, of course, morels, but also days gone by, I was reminded of our old neighbor Grandma Merrick. She had a birdfeeder that hung from the fence between our yards, right next to the crabapple tree that fostered the morels. Each evening, an hour before sunset, she would refill the feeder and, if I was outside, we’d chat for a while over the fence.

“Pammy,” she’d say, “This world gives us so much to be grateful for. You just have to remember to look for it. Every day might not be good, but there’s something good in every day.”

Ain’t that the truth.