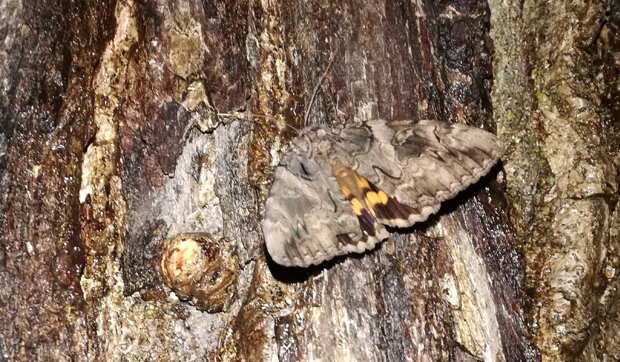 A Catocala moth, its brightly colored underwings just barely peeking out from below the cryptically pattern forewings, samples some sweet moth bait on a tree at Hickory Knoll in St. Charles.

Some of you might be aware, I’ve been a naturalist my whole life. But it’s only been a career since the year 2000. Prior to then I worked as an editor in the world of trade publications, focusing mainly on magazines in the food industry.

My first grown-up job, in fact, was styling recipes at Cahners Publishing in Des Plaines, IL. Besides producing many magazines for the food, engineering and building trades industries, Cahners published cookbooks. My first gig was working on recipes for the American Dietetic Association’s bestselling (at least among nutrition folk) Dietitian’s Food Favorites.

Using the Cahners stylebook I learned the difference between healthful, which means promoting good health, and healthy, which was used to designate something (usually a person) in good health. I learned that recipe ingredients must always be listed in the order they’re added; and that tablespoon is abbreviated Tbsp., while teaspoon is tsp. The tomato condiment is ketchup, not catsup; and it’s donut, not doughnut. (Though what that word was doing in a dietitians’ cookbook, I have no idea. They’re not healthy. I mean healthful.)

At any rate, not in a million years did I think that those early days in the work-a-day world would ever again be relevant, especially not after I transitioned to being a full-time naturalist. But I hadn’t counted on what would happen the day I became a moth-er.

See what I did there?

Yeah, that hyphen. I’m not mother, not by any means. (I don’t even think of my dogs and cat as fur kids. They’re my buddies, who take care of me as much as I do them. But I digress.)

A moth-er, by contrast, is a person who fancies moths. Which is not to say I’m a lepidopterist, a professional who studies them scientifically. Rather, I enjoy exploring their diversity, their life histories and their bedeviling identification characteristics. Basically, I just think moths are cool.

I watch them in the evenings by the porch light; I worry about them as they fly toward my headlights as I’m driving. I keep an eye out for their offspring-caterpillars-too, especially at this time of year when woolly bears are on the move.

Just last week I found a hefty woolly ambling across a bike path. I was going to pick it up and move it in the direction it was headed, the same way I’d do with a turtle, but then I realized I had no idea of what the caterpillar’s intentions actually were. As a result I ended up just standing there as a sort of roadblock/crossing guard as the cat’ made its own way, a pattern of movement that ended up being a giant U-turn. The little guy disappeared into the grass whence it came, and I learned another lesson in letting nature take its course.

Another factor contributing to my love of moths is that I like to cheer for the underdog.

When you think of individuals in Lepidoptera, the order moths share with butterflies, which image comes to mind first? Is it a moth? Or a butterfly?

Yet moth species outnumber those of butterflies by more than 10:1. Illinois is home to around 1,850 species of moth, as compared to around 150 species of butterfly. Across the continent, the disparity is even greater: 11,000 species of moth vs. around 725 for butterflies. But do parks, zoos and museums build Moth Houses where visitors can admire the astounding diversity among species? Nah. It’s always called a Butterfly House-even when moths might live there too.

I think butterflies, generally speaking, have a reputation that somewhat akin to a fairy princess; both are creatures that are pretty and seem incapable of doing wrong. Moths, though, are often perceived as the wicked step sisters. Their larvae feed on our sweaters and destroy our crops.

Wikipedia lists eight moth species that are considered pests of economic importance. I know, Wikipedia has its faults as a source but, c’mon…with 160,000 moth species worldwide you’d think they could find more than eight that are unruly.

You know what else is really neat about moths? They’ve allowed me to link my current occupation with that of my past. As part of the preparation for a program we did on moths, I dusted off my recipe skills and whipped up a batch of sweet moth bait.

Mixtures of this nature typically contain some form of alcohol-either beer or wine and sometimes rum-plus soft fruit (the riper the better) and syrup or molasses. When brushed on tree bark, the brew acts as an attractant because many moths, even though they have no teeth, definitely have a sweet tooth.

Using ingredients I had on hand, I came up with a concoction I’m pretty proud of. If you’re as into moths as I am, you might want to make some too. So now, without further ado, here’s recipe:

Combine all ingredients and whisk or blend to form a smooth, liquid paste. Mixture should be thin enough to spread easily but thick enough to cling to tree bark. Let sit at room temperature 10-12 hours. At dusk, paint a 12-in. square on tree trunks using a new paintbrush or basting brush.

The best mothing action tends to occur after 10 pm. If the night is warm and humid, all the better. You might even find you can smell the bait as its attractants waft through the air. Sweet, slightly fermented…you might be tempted to try some bait yourself. I can tell you…it has a taste only a moth-er could love.