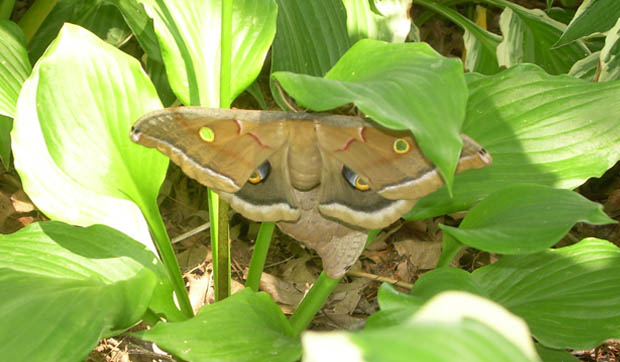 Polyphemus moths are locally common in our area but rarely seen due to their nocturnal nature. Good Natured reader Lorayne Hrejsa recently captured this pair (Yes! There are two, if you look closely) exchanging greetings in her yard.

In the world of lepidopterans – the “scaly wings,” or butterflies and moths – one group seems to dominate in terms of public awareness.

When was the last time you heard about the plight of butterflies, specifically monarchs? Five minutes ago? Me too.

This iconic animal has been grabbing headlines for over a few years now, ever since conservation groups petitioned the U.S. Fish & Wildlife Service to list the monarch as a federally endangered species. (Policy note: USFWS has until June 2019 to decide whether these butterflies will receive federal protection.)

Their plight has a number of causes, ranging from deforestation and unfavorable weather in Mexico, the migratory species’ wintering grounds, to a lack of suitable habitat in the United States. But because of the monarch’s widespread recognition, citizen science groups have rallied to its rescue. The jury is still out on current population numbers, but I can think of at least 10 people I know who are raising monarch caterpillars for release back into the wild.

Thanks to the monarch, the public’s attention has been directed to butterflies in general. The sulphurs. The swallowtails. The checkerspots. Their likenesses often appear on signs supporting pollination and other such conservation causes.

When, though, was the last time you heard of such support for the other, and much larger part of the lepidopteran order, the moths?

Yes, moths. Despite the fact that about 90% of lepidopteran species are moths, enough for them to earn their own annual celebration (National Moth Week which, not so coincidentally, was last week, July 22-30) they still remain, at best, underappreciated, and at worst despised.

Even my mom, a woman who, over the years, has come to recognize that even little bits of nature are to be admired and not squished with a tissue, still crinkles her nose when I mention moths. She thinks of them as the little creatures that lay eggs in her birdseed and chew holes in her woolens. But, really, moths are so much more.

Moth caterpillars are important food sources for many bird species. Moth adults are widely consumed by bats. (Here’s something to, um, chew on… You may have heard that bats eat mosquitoes, and while that’s true, a bat would much rather munch on a meaty moth than a minuscule mosquito.)

Moths are also crucial – here’s that word again – pollinators for a large number of plant species. The thing is, moths are active at night. And not just right after dusk, but long after midnight, times when it’s not only hard to see them, but also when most of us are asleep.

And, if we are out and about late at night, what do we do? We turn on lights. Let’s face it, we can’t see without them. But doing so puts moths in a bit of a bind.

I’m sure you’ve heard of the term “like a moth to a flame.” Moths are, indeed, drawn to light sources. While this tendency makes for easy sightings for us, and easy pickings for bats, the presence of bright lights at night disrupts a number of physiological processes inside the moths.

Many moths can hear the sounds of bats echolocating and, in the dark, will drop away from the bats to avoid detection. Lights, for some reason, interrupt this response, and the moths get gobbled up. Good for the bats, but bad for the bugs.

Artificial lighting also creates havoc with female moths’ pheromone production, which makes it challenging for the males to find them. However if two moths do find each other, and they produce a family, the little guys may stay that way-undersized-as human-sourced lights can also inhibit caterpillar growth.

With more than 160,000 species worldwide-11,000 species in the U.S. alone-moths clearly have a lot going for them. But surrounded by threats like habitat loss, pesticide use and light pollution, they also have a lot working against them. Perhaps this brief look at moths has caused a lightbulb to go on-in your head, where it won’t distract them-and you can look at this undervalued group of species in a new…light.