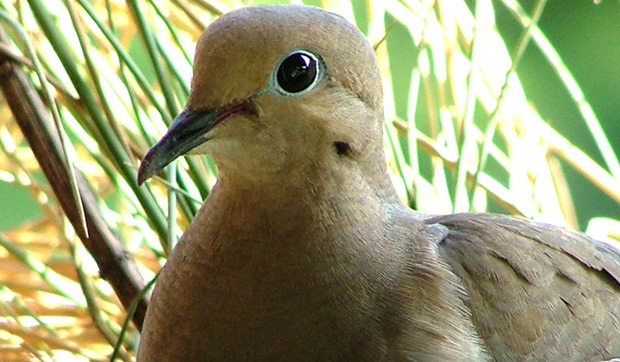 The quiet and unassuming mourning dove, a resident of neighborhoods and natural areas throughout Kane County, is possessed of some impressive superpowers.

From time to time at Hickory Knolls we hold a program called Superheroes of Nature. We look at how real-life turtles’ talents compare to those of Teenage Mutant Ninja Turtles; how the special skills of spiders stack up against Spiderman’s superpowers; and how bats’ ability to echolocate rivals any aspect of Batman’s genius intellect.

But today, looking back, I realize there’s a local animal we could have included in the program, but plumb forgot.

Surprising, right? I mean, when you consider all the hundreds of bird species that could possibly show up in our area, and then think about potential superpowers…would doves even make the list?

Peregrine falcons would, for sure. They can dive after prey at speeds of more than 200 m.p.h.

Woodpeckers would too. They pound their heads against trees, at a force 1000 times that of gravity, and not suffer even a hint of brain damage.

I’m sure bald eagles would be listed as well, if for no other reason than they are big and majestic, and darn cool.

Quiet and unassuming, these birds often are associated more with peace than with battles of super-hero proportions. In fact, if a conflict were to arise, with any animal other than their own species, these guys would probably lose. Big time.

Years ago when I worked at Red Oak Nature Center in North Aurora we maintained a large platform birdfeeder behind the center. Cardinals, chickadees and nuthatches were regular visitors, but it was the mourning doves that came out in droves. On any given day we’d see doves feeding inside the feeder; doves basking on its roof; and doves gleaning seeds that had fallen to the ground below.

All would be well until a hawk flew by. Then, startled by the predator, most of the doves would take off in a rush of whistling, flapping wings.

Invariably though, one would remain behind. Maybe it was too intent on preening, or otherwise not paying attention. Maybe it held still on purpose, a tactic doves sometimes use when trying to camouflage as a means of avoiding detection. Whatever its reasoning, it would disappear in a puff of feathers. Hawk: 1, Dove: 0.

Time and again we’d say, “Whoops! Guess that one didn’t get the memo.

But, believe it or not, doves do have some amazing superpowers. Their strong leg muscles allow them to push off and launch rapidly, while their pointed wings-shaped much like those of the falcons referenced above-allow them to attain flight speeds of 55 mph. Not quite faster than a speeding bullet, but impressive nonetheless.

Doves also have the ability to withstand high temperatures. Not fire-hot, like The Human Torch, but still considerably hotter than what we, and many other species, consider comfortable.

Avian biologists in the Sonoran Desert, where summertime temperatures routinely top 100F, a while back compared the heat tolerance traits of mourning doves vs. Gambel’s quail, a common desert species.  Using special chambers, the researchers gradually increased the air temperature surrounding the birds from a comfortable 86F to a stifling 140F. While the quail got fidgety and started panting, the doves remained calm and collected. Amazing! But how do they do it?

The panting that the quail resorted to comes at a high metabolic price, and actually produces its own heat. The doves, by contrast, rely on a more passive means of cooling-allowing water to evaporate across their skin. This superpower, which is different from sweating because birds don’t have sweat glands, let the doves stay comparatively cool. Their body temperatures measured 115F-higher than their normal 106F, but still within a range considered tolerable.

Given access to water-which doves can drink in prodigious quantities by sucking and swallowing, as opposed to scooping and swallowing like most other birds-doves can stay cooler, for longer, and with much less effort.

With the warm temperatures we’ve had this week, doves have been displaying this remarkable superpower throughout the area. Next time you’re driving down Randall Road, watching the heat rise from the pavement, look up on the powerlines. You know what bird species you’ll see? That’s right, the mourning doves.

As our climate changes and global temperatures rise, knowledge of which species can withstand high temperatures, and how, will become increasingly important. The more we learn the better off we’ll be, and that’s just, well, super.