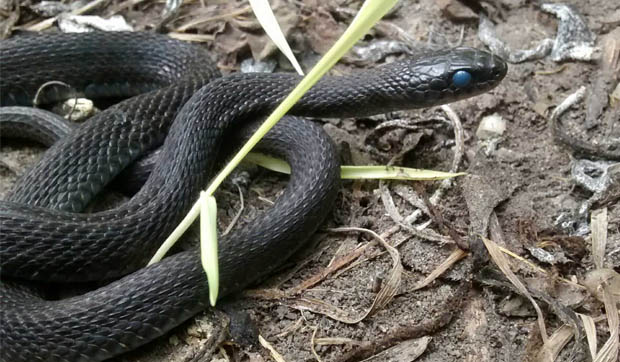 This garter snake has an overabundance of melanin, a dark pigment that obscures the individual’s normal markings. The cloudy eyes indicate that the snake is in the midst of a shed cycle. (Photo courtesy of Jill Voegtle.)

Every time I walk past a particular park district outbuilding, I get a little nostalgic. But not for the farmhouse it once belonged to, nor the era in which it was built.

Nope, my memories are a little more recent. A mere 10 years old in fact. Back then, the structure had a very prominent resident. She was large, and somewhat possessive. She kept careful eye on the place, making sure it didn’t get overrun with rodents, toads, or any other area interlopers.

She was, and remains to this day, the biggest garter snake I’ve ever seen.

She-and I’m fairly confident the snake was female, given its great size of nearly 4 ft. in length and the girth of a big ol’ kielbasa-ruled the roost in the summer months, coiling up by the door and basking in the sun. Her presence was enough to deter not only small creatures but also assorted employees not fond of large snakes.

She met her demise on a sunny February day in 2012. I don’t know the exact sequence of events, as I only witnessed the ending. But I think we can safely assume that Ms. Giant Garter decided to take advantage of the unseasonably warm temperatures-I want to say it was close to 80F that day-and slithered out to soak up some sun.

Probably sluggish from her long winter’s nap, she likely didn’t notice the red-tailed hawk that was cruising the area looking for a meal. When I happened upon the scene, the hawk was flying off with a large, writhing snake trailing from its talons. The bird landed in a nearby tree to enjoy its meal, and I walked away more than a little sad that our friend was gone.

Flash forward 5 1/2 years though and, guess what? We’ve learned that Ms. Garter’s legacy lives on.

One of that snake’s most distinguishing characteristics was an almost complete lack of any sort of markings on her back. Garter snakes of normal coloration will have a prominent yellowish or orangish stripe running down the middle back, or dorsal, surface of the body.

Ms. Garter did not have this distinctive mark. It was something that at the time we attributed to her obviously advanced age. But now given what we found the other day, I’m going to change my opinion.

Our naturalist crew was working on a chunk of land not far from Ms. Garter’s old haunt. And what did they find? A very dark garter snake with no prominent dorsal stripe.

I think Ms. Garter and, now, her progeny, are examples of melanistic garters. Melanism is an overabundance of melanin, a pigment responsible for dark coloration. We’ve written about melanistic squirrels before and how the coloration offers both advantages and disadvantages.

Melanistic individuals of any species will have an enhanced ability to absorb heat. This trait is particularly helpful to reptiles as they require heat from an external source in order to warm their bodies. But being dark carries some disadvantages too, particularly for animals like squirrels that are active in winter.  A normally colored gray or fox squirrel can camouflage itself pretty well, even when there’s snow on the ground. But a black squirrel, not so much.

In the snakes’ case, the advantage of being able to warm up quickly may be playing a role in the persistence of melanistic individuals. If they can get moving earlier in the morning, they may achieve more hunting success. And more food consumption can lead to a greater fitness and ability to reproduce.

Even though dark coloration may offer the snakes some benefit, I doubt St. Charles will be overrun with black garter snakes any time soon. But even just one is enough to perpetuate the trait-and the memory of Ms. Garter.