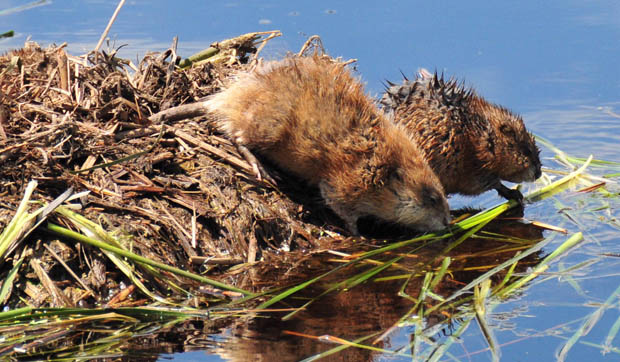 Photo Caption: Muskrat dispersal, when young individuals leave to find new territory, is in full swing in the TriCities. Look for evidence of their activity in ponds, streams and wetlands, as well as along roadways.

We consider it a human rite of passage: Grow to a certain age, acquire important life skills, then leave home to take on the big wide world. New adventures await and opportunities abound. All we have to do is make sure we don’t mess up.

With our big brains and our advanced societal structure, we like to think that becoming a mature and successful adult is somehow unique to humankind. But really, the process takes place in all corners of the animal kingdom. When you get down to it, we’re really not that much different than…muskrats.

The muskrat way of life calls for seasonally monogamous pairs to breed, in our area, twice a year. (I gotta say, it’s taking all I have to not call them Muskrat Susie and Muskrat Sam.) Litter sizes typically range from four to seven young, the care of which falls to Susie. I mean the female.

The little ones, known as kits, are born blind and peach-fuzzy. Weighing an average 22 grams (about the same as four nickels) each, they are helpless and completely dependent on their mother–the parent primarily in charge of kit-rearing.

At around two weeks of age, their eyes open and they begin learning vital skills like swimming and diving. Although they don’t have webbed feet, the toes on their hind feet have stiff hairs between them which help catch water and aid in propulsion. Their small but hand-like (minus a thumb) front feet are used for digging as well as grasping objects, primarily food items like vegetation and the occasional meaty item like mussels, crayfish or frogs.

Muskrat kits are weaned between three and four weeks of age. If they belong to a litter born in late spring or early summer, the kids–I mean kits-hang around the natal den for a couple more months; if they were born in late summer, they typically will overwinter with the parents and move out in spring.

Either way, if it’s at all possible, they try to not go very far.  A cattail lodge or burrow next door is ideal for these often social creatures. They achieve their independence, yet allow room for their younger siblings to be reared. Kind of like when Greg Brady decided he was too grown up to share a room with Peter and Bobby on TV’s The Brady Bunch, and created his own “pad” up in the attic.

Except there’s one problem. Even though muskrat habitat is abundant-thanks to our area’s preponderance of drainage areas-it is finite. Available food and space, competition for mates…these are just some of the reasons that young muskrats are forced to disperse-that is, hit the road in search of territory they can call their own.

Around here, the spring muskrat dispersals have begun. In fact, I saw the first evidence just the other day, at the intersection of Peck Road and Route 38 in St. Charles.

The lump caught my eye for a couple different reasons. One, it was near the very center of the intersection-a location more typical of, say, a glove or hat or bungee cord-something that fell from somewhere quite accidentally. But certainly not a spot you’d expect to see an animate object with even an ounce of road-crossing savvy.

Two, the lump was a most exquisite brown. It bore a variety of hues that ranged from golden to russet, with some deep chocolate accents along the back.

It was, without a doubt, a muskrat. A recently deceased muskrat, that is. Young and inexperienced, it had made a bad decision that had cost it its life. A day or so later, I was talking with Mike Horton, a friend and coworker, and the same topic came up. He said he’d seen several young muskrats too. And we both agreed that it was “that time of year again.”

Mike then made a heave-ho gesture with his arms, signifying parents pushing their young out the door. “Okay Junior, time to go,” one of us said.

We did it as kids. We did it to our kids. And now, in marshes, streams and retention ponds throughout the area, muskrat parents are ushering their offspring out into the world, to take advantage of its adventures and opportunities. All they have to do is make sure they don’t mess up.